Alex: Another question I've found myself puzzling over in the course of writing my book. Seems like the sort of thing that will spark another nice, long discussion amongst the SDKs and dans. 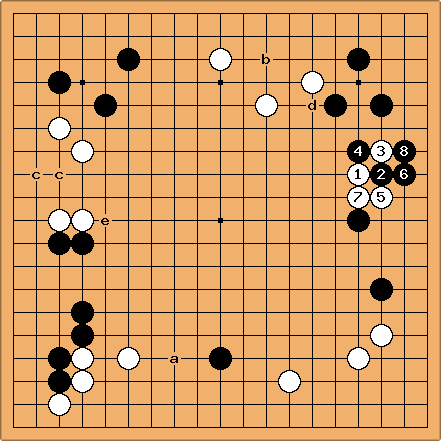 I'm into the section on Helping the Opponent now, and the bad habit in question is attaching to weak stones. The invasion of

is pretty clearly a bad move, given the three not-entirely-alive groups White has scattered around the board, but she's already behind, so she's got to try something.

dnerra: Where are these three groups? To me only the one on the lower left looks weak. Which makes a move at a mandatory, since Black's hoshi is also lacking a base. Btw, I don't agree that

is ok because White is behing -- playing bad moves is a bad strategy to catch up. Sorry for this diversion from your main question.

Alex: Sorry, I didn't mean to imply that

was acceptable. I meant that I can understand the feeling behind it, since White is behind. I was going to recommend something around a to reinforce the bottom left group and attack the lone black stone, but didn't want to get off topic.

As for the weak groups, I didn't say "weak" per se, I said not-entirely-alive. They're fairly safe for now, but if Black gets stronger in the vicinity of any of them, there is potential for him to stir up trouble with b (more so) or even possibly c (less so). Anyway, they certainly can't be considered thick, due to the possibilities of leaning with e.g. d and e.

is the move I really want to criticise, however. The sequence up to

is outright failure, since Black's profit is small and the Black group on the lower right side is heavily damaged.

could have been at

to avoid this, but the result would still be too easy on White - there was no need for Black to play so defensively. 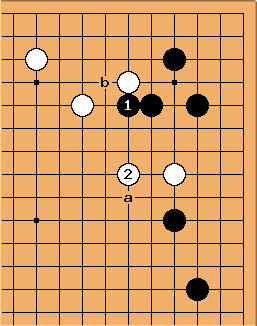 Of course, Black could try to attack directly at

or a or some such, but the benefit in this position is not all that clear even to me, so I thought I'd suggest a leaning attack instead, since it's easier to see how it works.

at a is likely to capture the invading stone. The question is whether Black should now accept an exchange, or continue leaning. 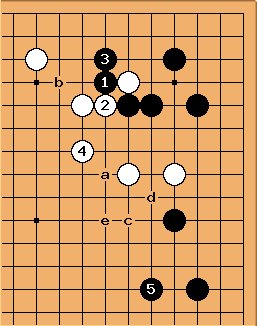 and add a substantial amount (something around 10... figuring out the exact value of moves is not my forte) to his corner. The downside is that White can force with

. Still, Black has sente to reinforce his group with

and White has a weaknesses at a and b to worry about. Black should have an easy game ahead of him. It seems okay to me to play this way, even though letting the opponent connect two weak groups is usually dubious.

instead, attacking black's two stones as well as building pressure against the lonely one on the lower hoshi point.

Alex: It's creative, but I'm not sure I like it. Black will jump out to c, or maybe peep with d and make the bigger jump to e. Either way, White is pushing Black towards her weak group. White can then connect, but all

has done, then, is to induce Black to reinforce his group, which he would have done after White connected anyway. I don't think White can really attack the lone stone on the bottom that strongly as long as her lower left group is still weak. 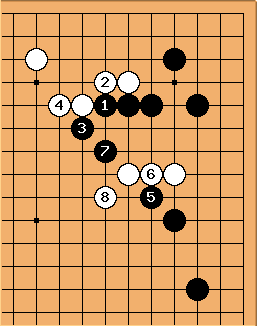 If the above seems too nice to White, how about continuing to lean? I don't think White can really afford to ignore

, so Black gets to make White heavy with

, then make the hanging conncetion at

. White has little choice but to run at

and Black will continue to attack, presumably connecting his lower right group to the lone stone on the lower side in the process. The downside is that the game is now a bit closer, territorially speaking.

Both options seem good for Black (definitely way better than what Black did in the game), but they are strategically quite different. What do you think makes the game an easier win for Black? Is it a matter of style? Most importantly, which continuation do you think would be most instructive to show to players at the level I'm targeting (10-20 kyu)? Whichever one I show, I'll mention the other one as a possibility (unless other people feel that one option or the other is unplayable).

dnerra: In my view, this is mostly a shape problem. Many 2d don't know about the differences between the following two shapes, but any kyu can understand it once it is explained: 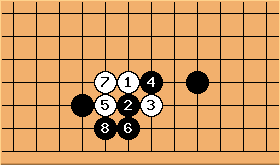 is often questionable, as after the cross-cut

are in good connection to the original black stones, as shown by this example sequence. 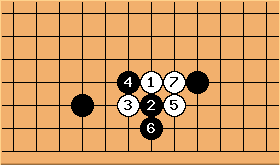 are in no good connection to the existing black stones. White has many ways to cut conveniently, leaving one of the two black stones badly damaged. 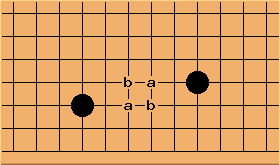 If White wants to separate the black stones, he has to enter at one of the points marked a. If White plays there, Black has to give up any hope of connecting, and should instead attack the White stone. If White instead enters at one of the b points (not often the right choice), Black can almost ensure a connection with the cross-cut.

Alex: Interesting. I knew the "good V/bad V" heuristic (from James Davies' Attack and Defense for the mixed three-space extension, but didn't know there was such a general rule for the mixed four-space. When invading such spaces, in the past I've just relied on intuition and/or reading, both of which would usually lead me to play the upper right a. I doubt I've ever played something like one of the bs, at least not since I've been a dan.

This point is raised in several places in Keshi and Uchikomi - Reduction and Invasion in Go. It makes a sort of intuitive sense since playing at a induces a cuttable keima while playing at b induces the ikken tobi which generally cannot be immediately cut without subsequent disadvantage.

However, since we're already all in agreement that the invasion and the attachment were wrong, all this is more of an aside to the real question.

dnerra: Not quite; I am also giving a different explanation why the attachment is wrong: It is a futile attempt to connect in this shape. If the invasion was on the 3rd line, the attachment on top wouldn't be very severe, but a steady and (given Black's lead) reasonable way to play. I know this is going into a meta-discussion again; but I think it is worth high-lighting a more fundamental difference here: You are emphasizing strategy when teaching weaker players. I like to emphasize shape questions, understanding of thickness etc. Of course, both ways may work.

Alex: I see your point. I do have an "Exceptions" bit in each chapter, and did mention invasions into a three-space extension as a time when contact is often the right idea, in order to maintain connection. I suppose I might also bring your point up, but it might only confuse the issue. Such is the trouble with writing about Go... any idea you bring up relates to about ten other ideas, so you have to fight pretty hard to keep yourself on topic. Best to give general rules, mention the exceptions and related concepts briefly to give the reader an idea of where to look for more info, and let them work out the fuzzy middleground themselves through playing.

Calvin: These discussions are great. It is interesting to see how for stronger players tactics really informs strategy, even if the stategic thinking comes first.

in the first example would be strategically sound if it was possible to connect. But since it doesn't work, it just helps white. There's even a disagreement as to which groups are weak vs. strong in this example, which seems to depend on what the players can see is possible tactically. Ultimately, I am less interested in the ultimate conclusions in these positions than in the way people are arriving at them. It's amusing how these examples are supposedly for a book on "common beginner mistakes" and yet from what I can tell the only "common beginner mistake" in them is not reading like the devil. ;-)

Bill: Tactics are quite important for determining the strength or weakness of borderline groups. That's one reason why life and death problems are so important. And tactics do inform strategy.

But do not be deceived. For instance,

in the first example would still not be good, even if it did connect.