Charles This page is to continue talk about Fuseki Problem 3 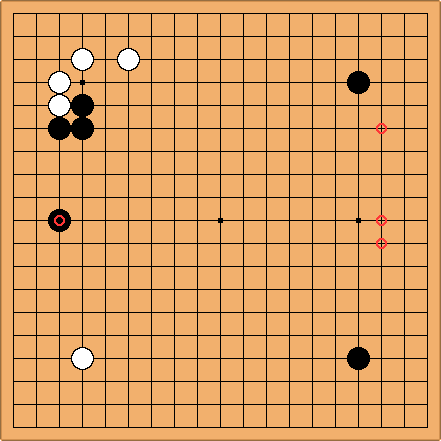 Having now looked at a database, I think this is a case where we aren't going to get enough about the later stages to be sure of anything.

There is this: when in pro games

is played, White plays to break up the right side, at one of the marked points.

Makes sense to me: as has already been said,

White's choice on the right-hand side 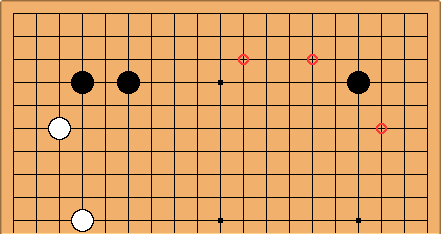 The most common choices for White's plays in this side pattern are the circle-marked points. 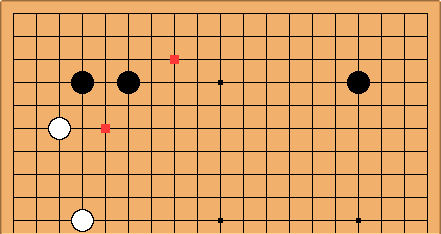 These are the other notable plays here - anything else is seen only a few per cent of the time. 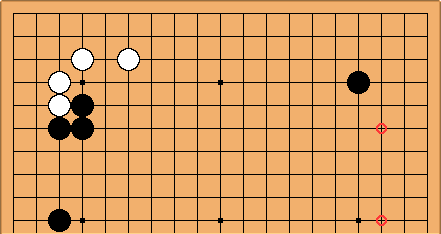 If we ask about the exact top side formation, there are only two choices that are frequent: these two circled points. Of those, the lower one is less frequent but more urgent: if played, it is played earlier. There is evidence from that search that fighting may have broken out elsewhere, too.

What to conclude from this? White played the approach in the upper right, on the right side. This is clearly not a poor move: it is a good choice in both searches.

White's play on the lower side 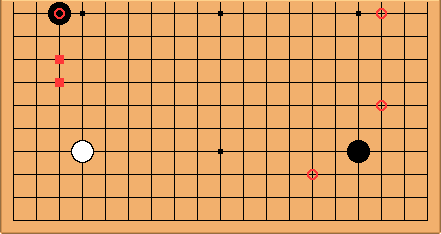 What about the way White played on the lower side? Here

is going to have an influence. Each of the five marked points is common in this side pattern: and nothing else is in the same class. Clearly the square-marked points are played to have some checking extension effect on

. The others depend on the whole position, no doubt: they are all big points. There is some urgency/frequency trade-off here, too. 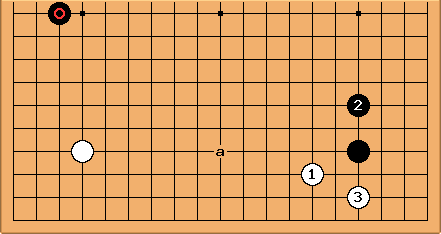 Something that is worth reporting:

as shown here is around ten times as popular in pro games, as playing back to a.

Another search shows that in reply to

is the normal play. Of course in the game position under consideration White is solid in the lower right, which makes a difference in joseki context. White's play at the square-marked point is unusual; but it need not be bad. It does leave a dilemma for Black after the tsukehiki line.

Overall conclusion It seems to me that neither player really understood the position at the top of the page in the same terms as a pro would. I say this mostly to explain why there is a limitation on reading information out of databases. As soon as both sides have gone their own way - chosen unorthodox directions of play - there are probably features of the game that aren't ideal.

This is what amateur play is like, in most cases.

I have certainly seen before the contrast between rather ambitious but not really correct play, such as White's, and rather careful play that can be criticised for many small matters, such as Black's.

Dieter: Overall, I'd say it's hard to criticize any of White's plays because he was in line with the pros or he chose a defendable line considering the joseki context. What interests me most now is the 5d's claim that the lower side is miai. 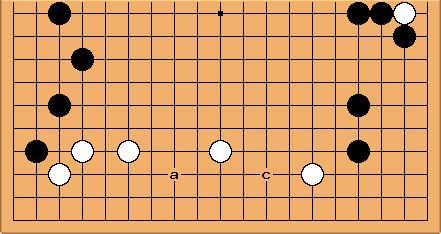 This can't remain miai all the time. Sooner or later someone will choose an invasion poin/defense and it will be sooner than anything in the center, so there will hardly be any stones influencing the chhoice. My tutor pointed to a and b, with a a little more valuable.

Charles On the other hand - I think that White's choice to make a broad framework on the lower side was a question of 'wrong feeling'. But this kind of play persists up to 4 dan amateur.