Here is a position from a game I recently played (and lost). I was playing Black and with

I had just captured a cutting stone when White played 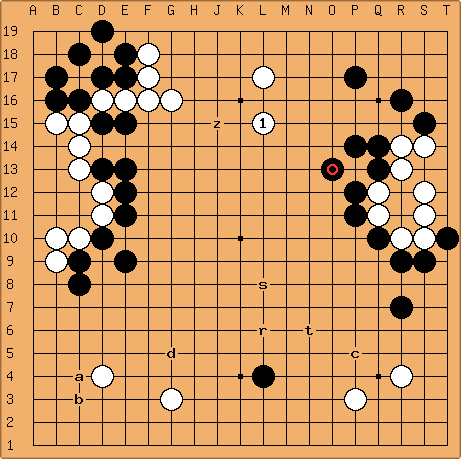 I think I don't understand the position at all, so could someone please provide some insight?

In particular I have the following questions:

Thanks for any feedback!

(Here is how the game continued)

Alex Weldon: Both black groups are pretty thick, but the cutting points do matter. With a cut at R9, White may be able to bring the stones to the right of that under attack, although maybe not immediately. Black, however, doesn't really have time to fix that defect, in my opinion.

As a quick estimate, I count 40 points for White, plus whatever she can get in the lower left. Black has maybe 20-25. This isn't including prisoners, because I don't know how many each side has, but I assume it's close to equal. Black's thickness doesn't have much attacking effect, because the sides of the board are close to played out, and White doesn't have any weak groups. What Black does have, however, is the possibility for a little center territory, although it's still wide open at the top and bottom (see Do not defend territories open on two sides).

The game is still close. My first instinct was that I liked White, but Black has some strong moves. There are two crucial issues: what Black can get in the center, and what White can get in the lower left. The rest of the board is pretty close to played out.

As far as how Black should answer White's marked move: he shouldn't. He's not going to get any territory around there, and the move doesn't threaten anything. I really like c for Black; it restricts White in the lower right, supports the Black reduction stone in the bottom centre, does a bit to protect the R9 cutting point from a distance, and does wonders for Black's center moyo. White doesn't have time to close the lower left corner (if Black gets c and d, he's won), so she'll have to play some kind of reduction/invasion of the centre. Black should look for an opportunity to take sente to play a or b.

Charles I think Black invades at b immediately. It's a matter of positional judgement first: after the invasion it looks something like White 50 points total, Black 30 points plus territory found in the centre. This is perhaps possible for Black. If White secures the lower left Black will require more in the centre: a 30 point centre is perhaps hoping for too much given the defects. 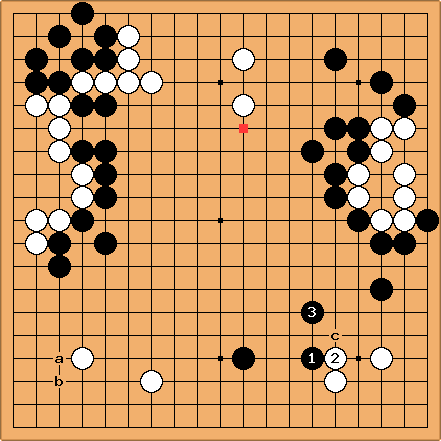 If Black gets sente to play in the lower right, this

combination looks good to me.

necessary to defend the lower right? Otherwise, it doesn't look to me like the

exchange is good for White. If White ignores

to close the lower left, or reduce/invade the center, what is Black's follow-up?

Charles Oh, but if Black can play at

here it looks like he's winning? It's very much a key point.

, how about White c?

Then Black should aim to play the square-marked point to enclose the centre. But I believe that's the correct order of priority.

dnerra: I came exactly to the same conclusions as Charles. The problem with immediately trying to shut off the top (which I would try by starting with the kikashi of z, btw) is that it is too one-sided, I think. You are pretty much committing yourself to answer r at s -- otherwise your moves at the top would lose their meaning, and then the black stone at the bottom is getting weak. Then white at t, and you still pretty much have to answer at the top. So you made at most 30 points in the center; but you have to subtract the QARTS of the weak stone below. In summary, closing off at the top can't have been a big move, and definitely not as big as entering the 3-3 point. (Note that this will most likely be sente.) 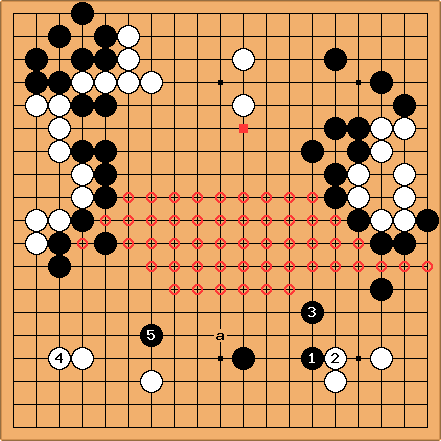 Klaus: Having read too much Takemiya recently, I would suggest not invading the lower left corner.

I have marked 51 Points in the center just to imagine what Black is trying to claim. In some sense,

even threatens the lower left corner; and if White reacts, Black could come back to the squared point. Does that make any sense?

dnerra: That does make sense. However, White will not quite follow your plan, I think. After

, the center is more urgent, and White will play

(making the 3-3 invasion more difficult) or a.

Bill: My first impression was also to invade the lower left corner. However, I see three problems with that idea. 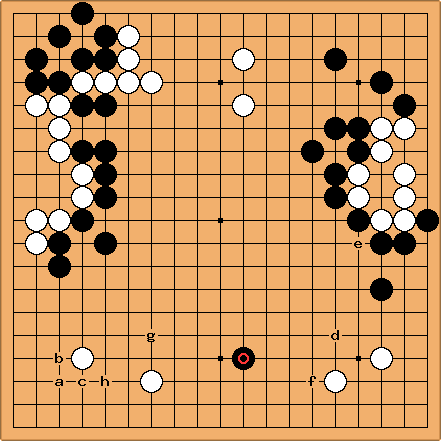 First, it is not much of an attacking move, and typically you want to use thickness to attack.

If Black plays at a, White will probably not reply at b, but at c, forming a stable base. Second, for that reason, Black may not keep sente. Third, and perhaps most important, it is not a multi-purpose play.

Black d is a multi-purpose play. It covers Black's weakness at e (at least for now), assists

, enlarges Black's moyo, and threatens plays against the bottom right corner, such as f.

Black g is also a multipurpose play. It threatens a more severe invasion of the bottom left corner, perhaps at h or c, assists

, and enlarges Black's moyo, too.

Charles I'd agree that after Black a, White c looks like a high-level answer. But Black ought to be happy enough with getting that, as a concession. See anyway 4473 enclosure 3-3 invasion, block on inner side.

Klaus: The sequence suggested there does not seem to fit the global position. Charles Well, no: neither player should follow a joseki blindly with so many other stones around. In fact middlegame joseki can essentially never be played automatically: it's their nature to take place in a rich joseki context Klaus: Of course! But it is importand to point out, why the standard middle game joseki does not apply here. This reminds us of the initial assumptions: 1) sente is importand 2) black is strong at the top 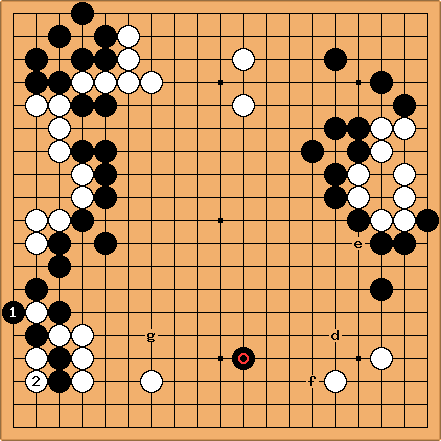 The ponuci is certainly not worth 30 Point here, black seems to be overconcentrated. so he must surely play something else. By the way, of course, white did not insist in takeing sente here, but which move should he leave out? 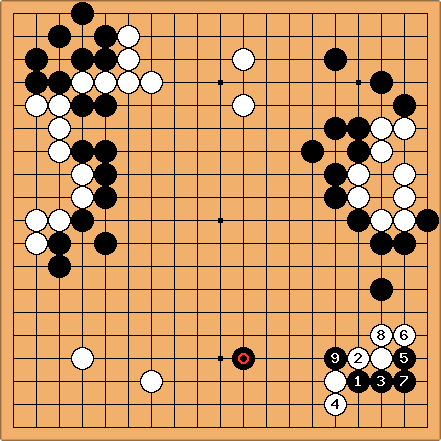 The purpose would be to sacrifice several stones in the corner for a fight in which Black can hope to close the center in sente.

might be a point lower, with a possible ko. But these variations are very difficult to read out.