Dieter: Here I give the first 38 moves of a tournament game between a lousy 2D and a promising 1k. I have analysed the game with a stronger player afterwards. Here are the deshis comments, to which I later added the 5D's comments. When you read this, chronological order of comments may be completely absent. The issues are:

Now, I want to emphasize that I add the "5D" label to his comments not to overrule other deshis, but to give some degree of authenticity and trustworthiness (if you don't know his rank, you might as well dismiss it, while a 5D's comment at least deserves some thought) while keeping his identity unrevealed. 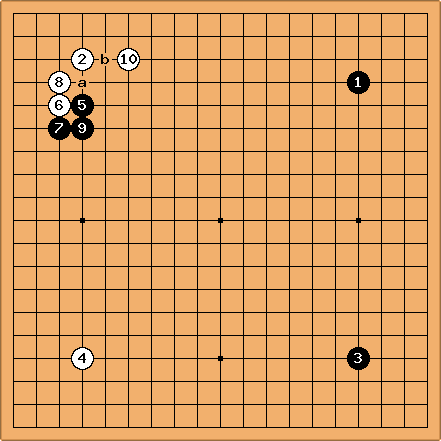 should be rather at a followed by White

and Black b. This would work well together with the high position of Black on the right side.

cannot really be regarded as a mistake though, it leads just to a different game.

certainly can't be considered as a "mistake". A search of the GoGoD database reveals it to be nearly three times as common as

at a in this position.

Dieter: The 5D didn't say anything about the preferability of the avalanche. 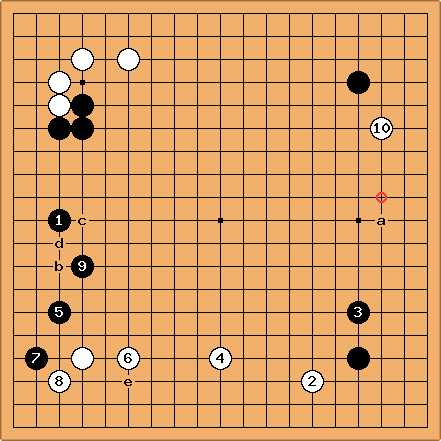 is non-urgent: the ordinary extension to a is better. Once Black has played

exchange is bad as it causes Black to lose sente. (Without it, Black can answer an invasion at b by taking the 3-3 point.)

Charles I'm reluctant to say that plays like Black's on the left are absolutely bad. They do look a bit too steady, but

is thick, too, really. Since

could be a wedge at the circled point, that raises a query. White might like to slow the game down at this point.

, 2 times other moves in this area, one time tenuki). For

, a move around a would be more usual. I'd say it all falls within normal variation though. Still, I do agree with Andrew that the low position of

and the extremely solid play with

are contradictory, and would consider that a real (though minor) mistake.

Dieter: Many people, including the kyu players in my club, seem to dislike the low extension of

. According to the 5D it is absolutely playable but he says that after

the (lower) left has become non-urgent. So, the follow-up of

is not really bad, but not urgent. If

were high, the LL would be urgent, White would almost invariably play there and Black can take sente. If you like having the initiative - and the 5D does -

and (the consistent move of)

, everybody agrees that it is small, overconcentrated, slow and lacking flexibility. The 5d criticized it heavily. Myself I agree with Charles that one should not only look at the points those three extra moves make but also at their thickness. An invasion of the lower side can now be done carefree.

and definitely instead of

, the 5D recommended Black a. I had played

almost hypnotized by what I thought to be a nice configuration. When it was down on the board, I wasn't so happy with it anymore.

dnerra: Reading through this discussion now, I am surprised no one questioned the direction of the approach at

. Instead playing at e looks clearly better to me. White can hardly pincer without getting overconcentrated, but any extension along the side of

will not have much effect due to the low position of

. On the other hand,

look a bit odd to me after the following example sequence: 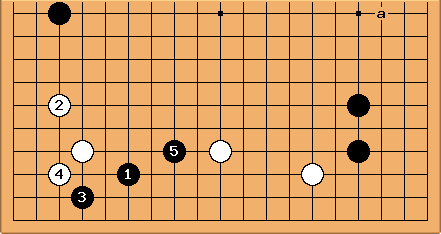 I am curious to hear other opinions on

. And suggestions for better continuations by White. 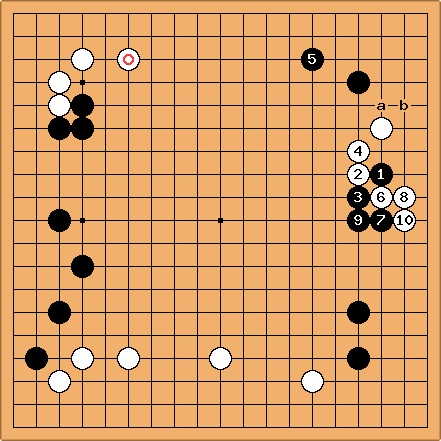 would be better at

. In the game White settles herself easily.

Charles Well, I wonder about

looks sensible in context. Given that

is low, shouldn't Black be trying to get White to invade at 3-3? That might mean a more distant pincer in the first place. How about

mafi?: There is nothing wrong with playing

to solidify the UR corner. Moreover, playing

would make Black overconcentrated at the right side while giving White the chance to attack the weak UR corner. Instead of

Black could also play at a or b.

Andre Engels: I don't see how a wider pincer would be better here - according to a database search,

, although the difference seems insignificant (

Charles I think that

Dieter: Everybody agrees I think on the idea that the right side is important and the upper side is not, given Black's high position in the LR and White's low position at the marked stone. I was aware of that too and that's why I played a pincer. Yesterday at the club someone suggested a low pincer one point further and I liked it very much. Charles suggested it high and I agree with it being better off further but I also like it better low. Myself, the 5D and apparently other players would have wedged instead of kakari'd. Someone suggested a kakari on the lower right, and that may be interesting too. The 5D didn't speak out for any kind of pincer.

On the other hand, he was not at all happy - and I fully agree - with my move at

. In fact I mindlessly played joseki whereas before I had been aware of the little imprtance of the top. I should have made a hanging connection to emphasize the right side. White will then double kakari, but Black gets out and a fight will develop while White makes territory at the top and Black on the right side. This should still favour Black because of his high extension in the lower right.

Charles I think I'd now agree with the idea that Black should make the hanging connection and fight. 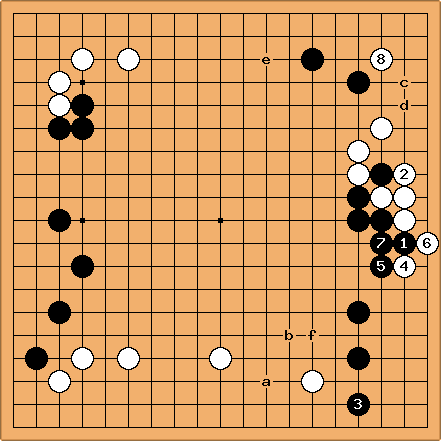 really be right? I think I might stop playing near a strong white group and invade at a.

doesn't look like the right direction to me: the lower side is White's only potential framework. A play near b looks interesting for White.

immediately would be better, I think. Black could then either lock white away from the corner better than in the game or take sente.

is fairly obvious from a One-Two-Three point of view.

was obvious and he liked

. He thought of it as by far the biggest move on the board. I thought I had to have defended at c or d (which if unanswered will allow me to capture

). He said: White is strong and you don't want to play near it. He went on to criticize almost all moves from

is small and should thus not be answered by

are rather consistent with earlier bad moves. Then

, which depressed me in the game, received bad marks too. I was surprised to hear him label it "play too close too a strong group" once more. I'd think White c, yes that's too close, but sansan is fine, no ? He said no. White should attack at e instead.

I will now specify my question about big points. How do you judge the lower side ? Is an invasion urgent, if yes where ? If yes, how should white defend. If not, when will it become urgent. And so on.

Andre Engels: I think an invasion on the lower side will have its turn not now, but likely in the near future. For now, black first has to extend on the upper edge (either or not cutting off

from the white group first). After that, white might prefer to avoid his upper left group being cut off from the center, but pretty soon an invasion around a will be either made or avoided. Where white is to play to defend, is not so clear to me, but b or f seem most likely - at this point stopping black from getting too much influence in the center looks more important than completely securing the territory. 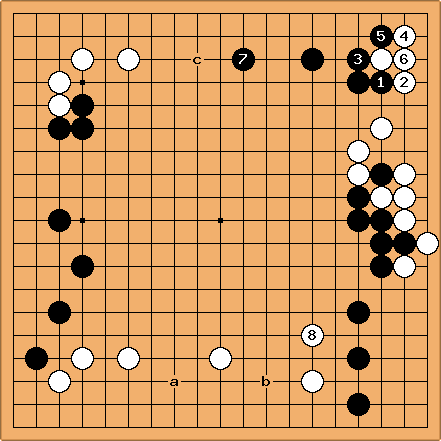 Charles Certainly this could happen now, in a real game. As Black I might omit

(though it is probably honte) to play first on the lower side. There is something strange when both players play as if they were leading in territory.

, Black should not hesitate and invade at a. IIRC he said that c was more urgent than

but that Black would probably invade at a anyway after White c. He said in this territorial game it was difficult to find big moves.

I was deliberately not using a database to begin with!

I'll look in detail later: but in this case surely the joseki context, both in the upper left and in the lower right, is rather important.

We only seem to be discussing the first of Dieter's points, by the way. Charles