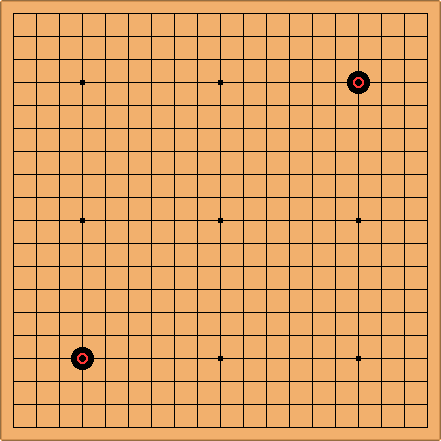 in the opening (or as the mirror image, of course) - it gets its name by reference to the hoshi (handicap points) where the stones are played. It is an important example of tasuki fuseki.

It was also considered one of the ideal openings, with a maximum of rapid development and freedom of direction. Naturally White can thwart it by playing

in the diagonally opposite corner to

Later, with komi increasing from 4.5 to 5.5, and further to 6.5, this setup came to be considered as insufficient for Black. In recent years, Black often opts for Moyo on one side in a parallel fuseki, like the Chinese Fuseki, to maximize the first move advantage.

HolIgor: Why would White want to thwart this variation? Analysing my games with Kombilo I was surprised to find that I usually win against tasuki fuseki.

Charles Matthews I think you'll find that playing the 4-4 point at D4, rather than D16, was the standard pro strategy at times, for example 1970-1975. It depends rather whether White is more concerned to counter cross hoshi, or the Chinese fuseki.

Dave Sigaty: As Charles points out, these patterns vary over time depending on what the pros are struggling with at the time. Here is a GoGoD CD (July 2002 version) search on White's replies to an initial black hoshi for the period 1998 to date.

Calvin: To some extent it also seems to be a matter of personal preference. Takagawa played cross-hoshi as black almost as much as he played a parallel point, and Ishida Yoshio seems to have actually favored it. 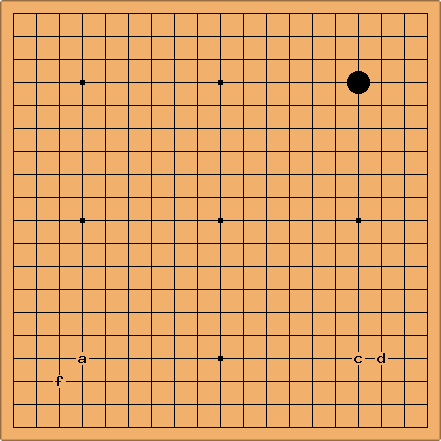 Just the four continuations shown account for 2054 of the 2076 games with a first play on hoshi. Currently White seems less worried about blocking the tasuki fuseki since c and d together represent about 2/3 of all games.

The difference in Black's response to c and d above is interesting. 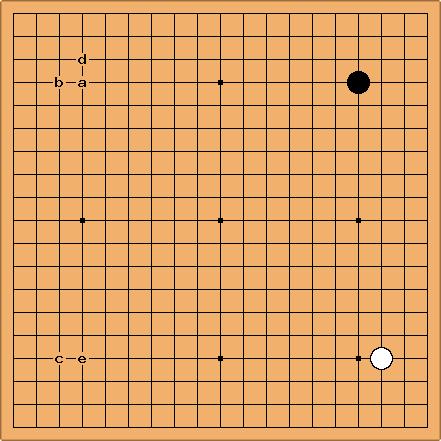 Against White's komoku (d above), Black plays parallel fuseki more often than diagonal (tasuki) fuseki but the two most frequent replies have been the diagonal plays at c and e shown here. The five replies shown account for 342 of the 348 games. 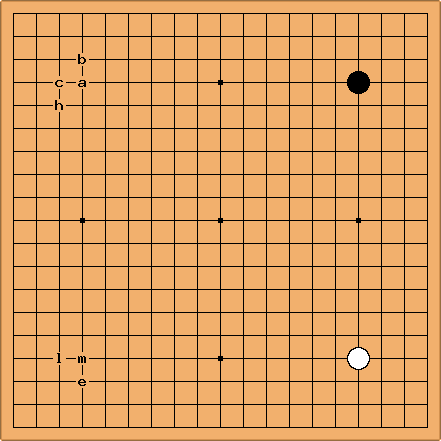 The seven replies shown tally 1074 of the 1090 games. Of these the diagonal replies amount to only 48 and diagonal hoshi only 2. Clearly current professional practice does not employ diagonal fuseki against White's hoshi (c in the original search above), especially not diagonal hoshi.

See Beauty and the Beast for discussion in relation to Chen Zude and the rise of the Chinese fuseki.