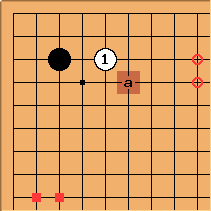 here is actually a little heavy in feeling, compared with the approach at a.

Therefore one should presume

is played for a reason relating to the joseki context: some strength for White in the direction of one set at least of the marked points. 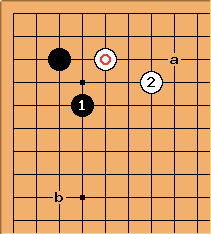 in answer, White wouldn't be so happy simply playing back to a: Black might be able to attack these stones later. White's idea may be that

is possible as shown, if backed up by a thick position in the upper right. Later, Black may make an extension at b. 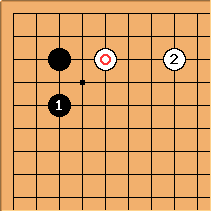 Black is reluctant to play

. But if White is strong on the left side, it may be a good idea. Just looking at this corner Black has more territory, and sente.

It is commented at 3-5 point distant low approach that this result isn't quite satisfactory for Black. So White can be reasonably pleased at this outcome.

gauss: My impression from looking at that page was that this wasn't quite satisfactory for White (i.e. was a special strategy). Which is it?

Timm: Maybe the result is satisfactory for White if Black plays the one space jump rather than the keima.