When joseki are described as "special purpose," what does this generally mean? I've seen it in Kogo's (my only joseki dictionary), and it occurs sometimes on SL, as at 44PointLowApproachTwoSpaceLowPincer. Some variations and examples from games would be very helpful.

Such a pattern, which is known to give a fair result in an unusual situation, could be called joseki for special purposes.

The study of such joseki should not differ much from more common joseki. They're all an application of fundamental principles. Understanding the principles and knowing how to apply them is more important than learning joseki for special purposes.

Blake: That leaves the question, though: what special purpose is required to achieve a fair result? The page I mentioned above doesn't give examples of what "special purposes" that particular joseki might be used for--or what unusual situation gives rise to that special purpose. :) I'm only around 11k, so my study of joseki hasn't been (and won't be) extensive, but it would be helpful to know. :) For instance, in the case of the two-space low pincer to a low approach, would that generally be used when there is a black stone on that side already, so that a pincer is also an extension?

kokiri pincering from you own strength sounds like a pretty good idea. As for special purpose joseki, how about ladder dependant joseki or handicap joseki. It probably means that it's not a very mainstream joseki, but in certain whole board positions it is right: from that point of view, all joseki are 'special purpose' in that whether they're right or wrong depends on the rest of the board.

Rich: I don't think ladder-dependency is a special-purpose joseki; the ladder is a by-product of the joseki choice, and it is local. However, a joseki that gives your opponent a ladder capture so that you can play a ladder block/ force an advantageous sequence somewhere very important may be. The special purpose is to make a big move/advantage/framework away from the local situation, playing a slightly suboptimal local position to gain a larger whole-board advantage or support other groups.

Dave: Presumably "special purpose" refers to a relationship with stones nearby. Of course if the dictionary does not specify what stones those would be I think the casual user of that dictionary is at a loss. The "un-casual" user doesn't need the book anyway and just reads it out :-) There are two things to keep in mind in this regard I think:

Of course since these two points essentially leave every joseki in play when evaluating almost every position, they amount to saying, "Don't worry about this special purpose idea!" That's my advice anyway. I think that you need not be concerned with what are "special purpose" joseki until you can develop your skills to the point where you can identify the influencing factors yourself.

Charles Agree with Dave, mostly. During the middlegame, you can't play any set sequence (joseki) blindly, with the exception of a few invasions (and even then ...). For a mid-kyu player it seems that any joseki result is good, compared to an improvised sequence that goes horribly wrong. To get stronger, one should become more sensitive to the but not always a good idea disclaimer on some sequences.

Bill: Special purpose sounds like an attempt to render the Japanese baai no te, a play that depends upon circumstances to be good or playable. If so, it doesn't quite seem to fit, but it is hard to come up with a short phrase that does.

Charles It wasn't, though. 'Contextual' is OK, but pompous for everyday usage. Context-specific is more like it. It does pinpoint the issue: your moves always ought to be context-specific (one of the great features of go), while even a very good book's plays cannot be expected to be, except in whole-board analyses.

Andy Pierce What about the Kosumitsuke Joseki? The presence or absence of a pre-existing hasami makes this joseki context-specific, but I wouldn't go so far as to call it "special purpose".

Charles That could be considered a relatively easy case. It is still a common mistake to see, to have it used when it shouldn't be; or (more debatably) not used when it should be (making the most of home advantage). The presence or absence of a stone in a particular area is a rather clear kind of context; joseki context in general is a bit less definite.

Bill: So, Charles, special purpose does not simply mean context specific, right? Then what's the special purpose of the pincer at 44PointLowApproachTwoSpaceLowPincer? (This is a real question, not nitpicking.)

Charles Take an example that does come up in pro play. 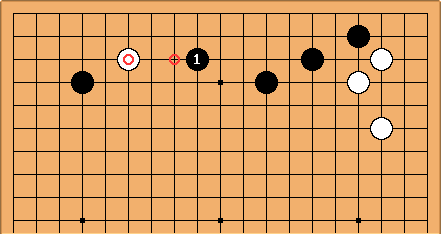 is seen after the

approach; Black can also pincer from one line closer at the circled point (there are some other options). I guess that that

is played with the thought that it should give better balance on the side, if White now invades at 3-3. But it would do less to confine the

Blake: Thanks for the discussion, guys. This was an issue which had been confusing me about joseki for a while.