isshoni: Once I'll have digested the material in Tesuji by James Davies, when I'll be around 10k kgs, I consider studying shape, tesuji - not joseki per se- through the reading of Ishida Yoshio. With this goal in mind, which of the three volumes would you recommend?
Is this study of Ishida possible for a 10k, or does it require higher reading skills?
Thank you.

Dieter: On one hand you should study what you like: I'll go with Bill on that one. On the other hand, if you really want advice, I do not recommend Ishida to anyone anymore nowadays. There are other books with a better focus on tesuji and shape and as a joseki reference it has become outdated.

bluemark: Available in English? Could you recommend some titles?

kokiri - I would subscribe to the style of joseki study, espoused elsewhere on SL. I seem to recall by Arno or morten, of using a joseki dictionary to review game positions that you experienced and consider how you could have played - i.e. studying real positions and joseki in context, rather than studying them for their own sake. For this, Ishida, plus the use of a professional database to see how the pro's actually play, rather than the book lines, is just fine. (For what it's worth, I'm a few stones stronger than KGS 10k, and I am far from done with Davies' Tesuji. That said, I think that improving reading is pretty key to moving up the single digit kyuu levels, but I'm not sure that studying Joseki is the best way to do it. What is...err, I'll get back to you on that)

Velobici: To study joseki is too strive to understand why a particular move is joseki. All other moves are in some way inferior. The moment additional stones are added to the board, then the joseki move may be inappropriate due to the effects of the other stones. Cho Hun-hyeon Weiqi Sucheng 曹薰铉围棋速成 is good for this type of study. A corner position is shown. You have to decide upon the next move. The next page (overleaf) presents three choices and why two of the three are inferior. Chinese reading comprehension is not required. In this way, the study of joseki is the application of tesuji and life and death knowledge to particular corner positions.

Bob McGuigan: Other books that take the approach suggested by Velobici are The Great Joseki Debates and Whole Board Thinking in Joseki. I think playing through pro games is good for joseki and shape study, too. Just watching which moves are played in a corner and trying to think of why they are played will help you understand and remember. Also, just studying isn't going to do much. You have to play a lot, too. Pay attention to what happens when you try various moves, go back to a joseki reference to see what you (or you opponent) should have done. Review your games with a stronger player. Finally, even though it is now out of date, the Ishida dictionary is still valuable. So-called basic joseki are marked with single or double black diamonds and these are still worth attention. Other books like Rui Naiwei's Essential Joseki and maybe Jungsuk in our time could be worth your time.

Dieter: Currently my favourite is ISBN 7-5326-0661-9, a Chinese Go Book, but readily available is Get strong at Tesuji. Another, more theoretical book is Tesuji and Anti-Suji of Go. But all problem books IMO do better than any Joseki Dictionary. Instead, replace your joseki knowledge with four questions in order to evaluate a (corner) sequence:

I'll take an example from my current favourite book 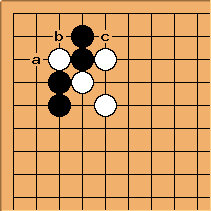 Black to play. Three moves to consider (to fix our ideas - there are more of course): a, b and c. 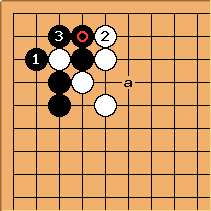 I think many players (including me) will instincively want to capture the cutting stone in a ladder. After 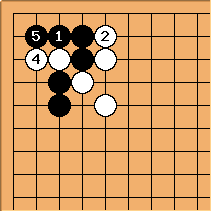 reverts to the first diagram, or he takes the initiative, but then White will create aji in sente by playing

- Who has the corner territory? Black.
- Who has influence to which side (or centre)? White to side and centre. Black to the other side, but on a more reduced scale.
- Who has the initiative? Black.
- Are there any weaknesses (thinness) or future leverage (aji) in the position? Black has worse potential here than in the first alternative. 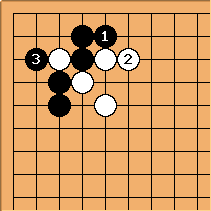 is almost sure to keep sente and force

. Next, Black can capture the cutting stone in a ladder. Now, ...

- Who has the corner territory? Black.
- Who has influence to which side (or centre)? White to centre and a bit to the side. Black to the other side.
- Who has the initiative? Black.
- Are there any weaknesses (thinness) or future leverage (aji) in the position? Black has no weakness whatsoever. White on the other hand suffers from poor shape. Her stones are already forming empty triangles.

Based on the answers to these four questions in each diagram, I have sufficient argument in favour of option 3. But that doesn't really matter: it's the questioning that is important.

[1] The more experienced player has an eerie feeling about this position. Black surely must do better from the initial position than giving side influence AND initiative away. Related to this easy going on White is Black's overconcentrated position. No defects, OK, but this is likely to be overdone. What's the use of