Igowin (for Windows) is a freeware 9x9 go program that uses a weak version of the 1998 engine from The Many Faces of Go vers.10. It's considered to be a nice, fairly easy introduction to Go. It's known to work perefctly under Linux and MacOS using Wine

One of the most intresting features of Igo it's it ability to auto-adjust AI rank accordings to statistics gathered from previous games. Same statistics are used to compute and display:

Base level of Igowin for new player is set at 25Kyu. Note that the difficulty levels indicated by Igowin have poor relation to common ranks. It's believed that Igowin's "average rank" (under "statistics" menu) indicator is typically elevated by about 8-15 ranks compared to its real-life rank.

You can get it free at David Fotland's page:

bogiesan?: Got an iPad? Try IgowinHD! I am not a good enough go player to evaluate the app's strength or integrity. I'm just having a ton of fun playing dozens of fast 13x13 games each day and trying to break many of my bad habits before tackling the full board. I hope others will review Fotland's clever port of MFOG to the iOS as a capable opponent and encourage downloads. Igowin is $10 and is easier to find in the iTunes store than the App Store. David, Boise ID

Jasonred: A pretty unique thing about Igowin, IMHO, is its speed, responding to moves as soon as you place them. This is good and bad, in that it makes practice smooth and quick, no waiting for your opponent. On the other hand, this teaches some bad habits, like playing too quickly (in response to Igowin), thinking during your own hand, instead of while the opponent is thinking, and such. All in all though, I prefer Igowin, as it annoys me no end when a program takes like 2 minutes to block my peep during the endgame...

JanDeWit: It has the standard Way to Go tutorial, it plays only on 9x9 and you can only crank up the difficulty by getting better yourself (after studying a little bit I rocketed up from around 23kyu with 4/5 handicap to 12 kyu with no handicap, so I guess I'm getting better).

I actually like the fact that you can't undo moves, as this forces you to think and not just click somewhere in the hope that your move works out OK. Too bad I don't have the cash to buy the full version (yet?). I think this program is nice for beginners to practice their tactical skills. 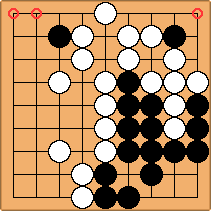 The marked points are considered dame by Igowin during the counting.

It thinks the marked black group is dead (white's turn). What do you think?

Aloril: Its unconditionally alive, no matter what white does black can just pass and white still can't capture it.

year (7K): I've had igowin record death for itself in a similar shape. The second eye point was above it though rather than to the left. I think it must be looking at the white at the critical point in the four point nakade rather than the second eye.

Igowin does have a "dispute score" function, where you can continue to play through positions like this to convince it that you are right. 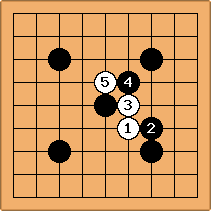 Every time I play the sequence above Igowin crashes as soon as I play 5. DrStraw 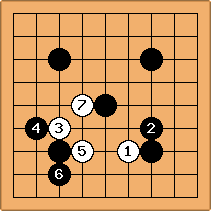 Here is another one. DrStraw 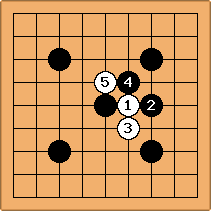 Igowin was my introduction to go. I still fire it up often, even though TurboGo offers games on other boards. It's an incredible program, despite its bugs. It's very aestetically pleasing, too :)

DrStraw This is probably not a very interesting question as it is easy to get lucky one time and get a high rank. More interesting would be the highest average rank attained after a sizable number of games, say 100. So you are saying that 188 is a lot more than 100? I could play 12 games more, and then give you the average at 200 games. But that would still be around 2 Dan + 0.50.

Jugular: I've managed to find a new and difficult Igowin challenge (a sign of a boring job I reckon). See if you can get there quicker!

It is not clear whether you are claiming that you achieved this or whether you are throwing it out as a challenge. Bildstein: From memory, it doesn't start keeping averages until you lose a game (stops all those kyu games muddying the waters). So if you win all the way to pro and then lose, I suppose this would happen.

The above challenge can be beaten in 11 games at the quickest. This is possible through vicious bug exploitation, and thereby defeating the computer by nearly 100 points every game. The Bug: after Igowin tallies the score for a game, don't start a new game or dispute the score. Instead, click on the board. You can place pieces for BOTH sides, allowing you to set up a devastating loss for the computer. Click "pass" twice when you are done rigging the board to receive your new score. This bug exists in the Igowin demo (version 1.0), linked for download at the top of the page.

Bildstein: You don't necessarily have to use the bug. When you are playing a game in the kyu levels, you gain 5 ranks for killing all white stones (you don't get this when you're playing as a dan). You get two ranks if you win by 31 or more. So I suppose the best would be 25k, 20k, 15k, 10k, 5k, 3k, 1k, 5d, 6d, pro. Or 10 games. You could do this, perhaps if you were pro. But then perhaps you couldn't. Igowin is not reliably bad. By the way, sometimes when I get beaten back to 1k I try for an all out victory to get me back to 5d. When it works, it actually makes it worth losing that 1d game. It's hard, but I've managed it. I've even kept an sgf of such a game because I was proud :)

Anyway, about my 'high score', this morning, after 810 games, I managed to get my 'Most common rank' upp to 5d (from 2d). So here's my score, after 810 games which I think is enough to be meaningful:

By the way, I also have Igowin crash on Pro sometimes. I think it's overtaxing itself - it usually thinks for a noticable amount of time first. Here's how I start on Pro and I have won many games this way (I win more often than not like this): 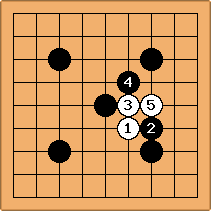 I cut off the lower right but Black invests in it and makes it big enough that when I capture it there's not much more to do to win. Sometimes I break in to the bottom left, sometimes the top right, and sometimes I invade the top left for six-stone, two point life.