How to lie with tewari

Certain arguments are based on tewari but may be questionable as applied in practice. Typically they re-order a sequence in such a way that one player is thought to gain on balance out of two identifiable mistakes or poor exchanges, one of which counts against Black and one against White.

If each of those could really be quantified as a loss of a certain number of points, then they could be set against each other for a conclusion that the sequence as a whole changed the score by the difference involved (that is, assuming all the other plays involved no loss at all). The tewari technique of permuting plays would be justified, because the loss made in the transition from the initial to the final position really doesn't depend on the path taken.

Suspicions are aroused, in general, by this kind of argument. It probably applies well enough in many endgame positions. It is much harder to be sure of the reasoning when looking at a sub-board, or in complex middle game positions.

Pros do use tewari - I was shown an example by Sonoda Yuichi as applied to a purported 'joseki'. Generally speaking, the more reputable applications of tewari reasoning are one-sided: after re-ordering the sequence, one of the players is seen to have done something loss-making or unnatural, while the other player's choices seem normal and good.

Bill: As the game progresses, tewari loses much of its force. For instance, the result of shinogi may be a group of several stones that make only two points of territory in its two eyes. Considered by itself, such a group is very inefficient. However, it may be the result of a game-winning invasion. But in the opening, tewari is an excellent heuristic to see whether stones are working well together. Because the board is open, a player will very often have an option to play a stone such that, if it were already on the board, the other stones that have already been played would be good moves. By contrast, a play that makes one or more of those previous plays not so good is probably inferior. 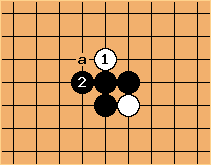 taken from peep at a tiger's mouth

... if there were a solid rather than a hanging connection,

is somewhat misplaced and would be better at a.

is ridiculous. ;-).
Dieter: Hmmm, I know it is not really tewari, but is the argument that this exchange is a little better for White false then ?
Charles This kind of argument is why I created a how to lie with tewari page ...
Bill: It's close on an empty board. My feeling is that it's about 50-50.

are correct, of course it is an even exchange. Both players have alternatives.

Otherwise, the question is whether it was bad to make the tiger's mouth. Plainly not. (Although there were alternatives, of course.) The peep is part of the cost of making the tiger's mouth, that's all.

both appear wrong, when initially they were both right before having the order inverted, so there is balance. (perhaps black should push before connecting, but that is another story) ~srn347

Solidus: I think the proper way to analyze this situation is like so: 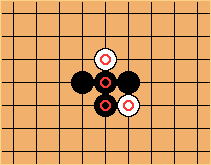 Remove the marked stones. You end up with two black stones in a perfectly ordinary shape. White and black have exchanged two additional moves each. One exchange is a peep and a connection against that peep, and the other is an attachment and a response. I think that's all tewari can say about this situation. If black had misplayed, then after removing the marked stones, there would be poorly positioned or over-concentrated black stones.

Slarty: The response to the attachment and existence of the one point jump are questionable for the consideration of over-concentration, but white stones are uselessly separated, which is a more fundamental fact. They are also too close, but much of the evaluation context would depend on the board context. There would be too many clean assumptions and apples-to-oranges comparisons (general forms of lying) involved in deciding that the "proper way" is useless and that that's all that can be said. After all, it's agreed above that tewari essentially indicates both have misplaced stones, but for different reasons... (which are subtle but perfectly capable of being further investigated) Remember that it was necessary to posit an invisible context where every single move in the starting position was reasonable. No short argument can take that true position into account, as it's an inherently complicated enough analysis that no proper way or clear statement is readily apparent. For a shape in isolation it's sensible to give up on expecting a correct answer from tewari analysis. To take a conclusion as fact when stripped of its context is tempting, but a lie will then occur.