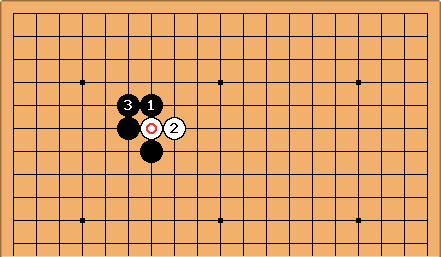 in reply, Black has two cutting points to consider. Here Black connects at one of them with

. Black is stronger, certainly. White however has gained a stone at

. In isolation one can't very well evaluate the exchange

There is a place here, though, to introduce some of the techniques of go 'criticism'. 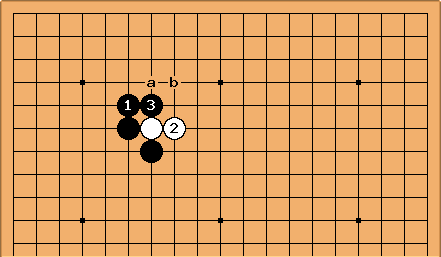 Supposing Black had started with

here. That would have been a solid way to play: perhaps unambitious. Then

looks possible, but could be queried by stronger players: perhaps heavy. after that

looks too tight; such a play is used when liberties matter greatly, but otherwise Black at a or at b do more to develop.

The technique of re-ordering plays is called tewari in Japanese: it is supposed to go back to Go Saint Dosaku.

As is explained on the tewari page, more than one type of argument is used under that name. The idea is to isolate anomalous plays or poor exchanges. A point made at how to lie with tewari is that this is much more convincing when one balances imperfect play by one player against perfect-seeming play by the other. Here we aren't quite in that position: one suspects Black's plays give away more, that's all.

The other technique that can be cited here is explained at One-Two-Three. A 'living go' example is One-Two-Three example 3.