Reinhardt: Since there is some argument about the usefulness of the tewari analysis, I would like to try to provide an example that is more straight-forward. 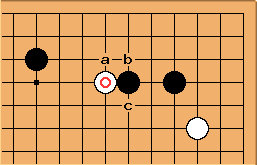 The question is how should Black respond to White's tsuke? 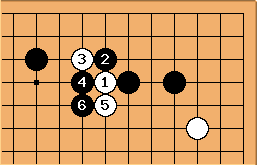 at a may not be readily apparent even from this position, but through a re-ordering of the moves I think it will become evident.[3] 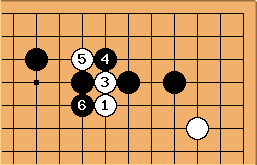 In this position, White peeps at

and Black ignores it, playing

elsewhere! There are only rare cases to ignore such a peep. If you do, this would allow White to push through, and if Black then plays

, we end up with the same position as the previous diagram.

(Funkybside: -- but these 2 diagrams are not the same, you have a stone at 4 in the previous diagram as already present in this diagram, now how'd that bugger get there? Had these diagrams been equivilant before

then this would be a sholder hit, not a peep. Am i just missing something? :0)

(New comment added on later date by Funkybside)--> I think there's a better way to state my point; Here the initial positions are different. I agree that ignoring the peep looks absurd, but the fact that black has an extra stone here implies the whole board position is different. Additionally, black has ignored a peep, played elsewhere, and white ignored black's tenuki and pushed. Black still has an unanswered move elswhere which should contribute to the 'value' of this position when compared to the original ordering!

Any time you ignore a peep you can expect to get a worse position locally than if you had responded to it.[1] Therefore, through tewari analysis we can see that a was not the proper response for Black. 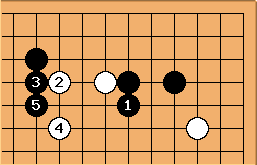 at c is a better response.

[1] phenomene : I think your analysis is not correct. Tewari analysis must proceed by removing the same number of stones for Black and White. Here all that you show is that in the second diagram, ignoring the peep and playing your sequence leads to the same result than in the first diagram, but this says nothing about the correctness of the play at a. Of course ignoring the peep in Diagram 2 is probably dubious, but in Diagram 1, Black has one less stone to begin with, so he shouldn't expect to get a result as good as if he answered the peep in Diagram 2. In other words, you don't provide a good reference to compare with.

With your kind of analysis, one can prove about anything. For instance, invading at the 3-3 point under a hoshi stone is not good, because if ones plays his first play in the corner at the 3-3 point, it is usually bad to tenuki on a shoulder hit approach!

Reinhardt: Thank you for pointing out my error in analysis. I stated incorrectly that if Black's response creates a result that is at all worse than the connection response to the peep, then the wrong move has been made. Even the diagram that I provided as a better response results in a less satisfactory position than connecting after the peep. 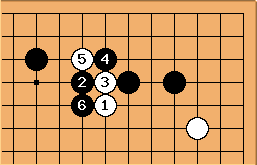 This is the exact same as the Tenuki from a peep? diagram, except that the extra black stone is now

. This diagram could be called Jump from a shoulder hit?. In any case, it creates the same position locally as a tenuki from a peep and thus is poor.[2]

What I tried to prove, but cannot, is that my better diagram is actually better. All I can show is that through tewari analysis, the move at a results in a poor position. It is up to you to decide if you can find a move that results in a better position. I happen to think that

at c in the initial diagram does.

I guess my example wasn't as straight forward as I had thought. (:

Let me extrapolate a bit further with another example of tewari analysis. Black's reasoning behind playing a may be expecting a certain White response. 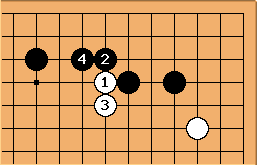 Maybe Black might expect White to pull back at

. However, I think you can see that this is an unreasonable presumption even without a re-ordering of the moves. 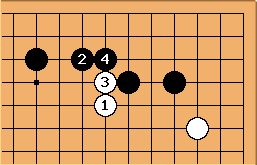 After re-ordering, we see that this position is the same as if White makes the shoulder hit at

and Black makes a knight's move underneath to get ahead.

is a classic example of a thank you move, and thus is not good. Therefore this position is not good regardless of what order it comes about.

So, going back to the original diagram, after White attaches, if Black plays a then White must block the connection instead of pulling back. Black's playing a expecting White to pull back is his error in judgment.

[2] phenomene : I think this is still not correct.

is not a good move either: the correct move is

. So we have to deal with a bad answer to a bad move: this tells one nothing (see how to lie with tewari on this).

Finally the sequence you criticize is a normal one and I doubt you can prove it to be bad by tewari. Your "better" diagram is not better, this is just a different global choice, and which one is best depends on the global position. 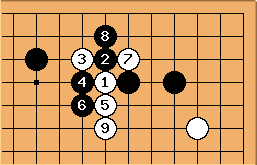 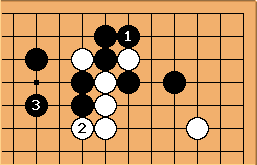