and continues to reduce the Yuki position on the top with moves 129 through 142. Given that this is a professional game, capturing the three white stones must be bigger than saving the six black ones. Black has played six stones while White has played eight stones to capture the six black ones. At move 143, Hane abandons these stones and plays to capture three white stones rather than save six of his own stones in gote. White captures with move 144 and Black gets a big point with move 145. Black could have played move 143 without the sacrificing the six stones. Same with move 145.

The Question: How does the sacrifice of the six stones allow Black to get both moves 143 and 145 ? 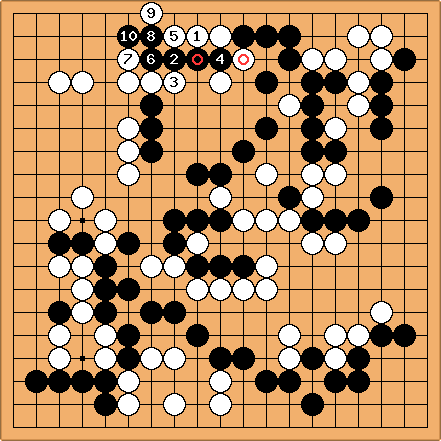 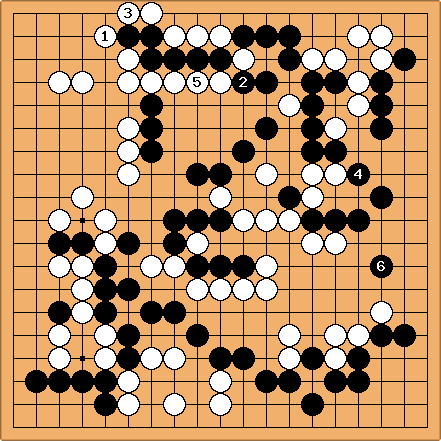 of the second diagram 15 points. Then you have to notice that

of the second diagram is worth fewer in direct territorial gain: it's around half that. But it is also worth half an eye. This alerts us to what is happening: it is not quite the endgame, in a sense.

is a territorial and an attacking play, because the central white group isn't unequivocally alive yet. To the 'face value' of

you should add the sente profit that will come from harassing the white group. 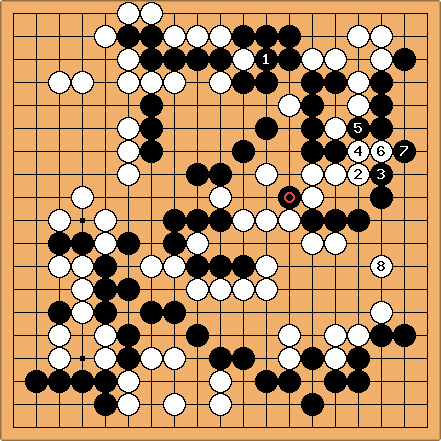 Dave: According to a TV analysis by Aoki Shinichi 9p, if Black had captured at the top, White would have taken the opportunity to play

which threatens to continue at 3 and break up the right side. Black would have to respond but White gets additional forcing plays.

also captures the marked Black stone without further play. Thus the play at 2 and the play at the top are roughly equal in size. The key is that whoever plays at the top, does not get sente to play around

. Thus the right is larger than the top. In this game, Hane knew that he was clearly ahead. At this point he was playing to wrap things up calmly.

Dave: The other thing to note is that on the upper side Black has played six stones inside White's prospective territory... and so has White. Thus, if Black sacrifices the six stones at this point, White has gained almost no points. In this type of situation, White is going to wrap around the furthest intrusion of the Black stones in any case, so Black has no reason not to go as far into White's territory as possible. If Black ends up keeping the stones, the negative impact on White is greater. However, if Black gives up the stones, the negative impact on Black from adding additional stones (after the first probe) is nothing.

Dave: To go back to the original question... If we ignore the exchange of the 12 marked stones, we can see that basically Black has obtained sente by inducing White to exchange