Bill Spight: While I agree that Black 10 does not work so well with Black's moyo on the right, I respectfully differ with Dave. I like it. :-) 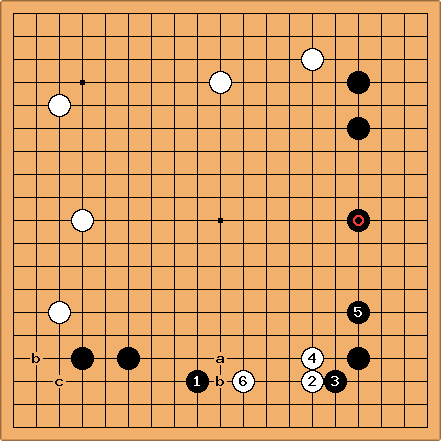 While here I prefer a to work with Black's stones on the right, if the marked stone were not there I would prefer Black 1. It's a nice, solid play. :-)
If White makes a kakari at 2, White 6 is less than the ideal extension.
If White b, Black c is premature now. Note that Black 1 makes it easier for Black to tenuki. White's follow-up is neither so big nor so threatening.
If White c, Black should cede the corner now and invade White's moyo on the left. Black 1 may be helpful in the subsequent fight, and it hampers White's development from the corner.
This is not to say that Black 1 is better than a wider extension, but it has its points. :-) In a handicap game it is a good, solid play that reduces the opportunities for White to make mischief. ;-)

DaveSigaty - I still don't like 10. In the line above what if White plays at a instead of 6? Because of the shoulder hit, I also think that White can consider approaching from the other side to the right of 5.

dnerra: Hmm. I probably would not like to play at a instead of 6 in this diagram. Black will push at b, gaining territory, and White's group is in danger of getting heavy -- it doesn't have a base yet. And if you as White enter on the other side, you seem to get even more cramped, don't you? Maybe Black 10 is just one of those moves - doesn't obey the theory, but doesn't lose anything in practice either :-) 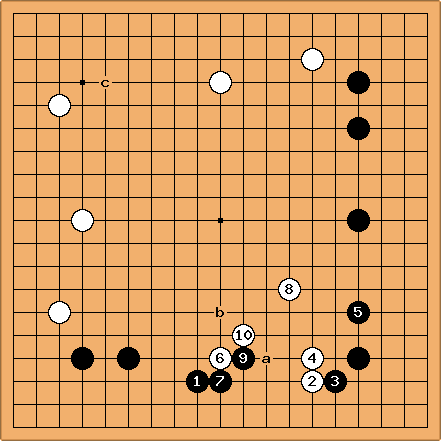 If 7 I think that White can treat 6 as kikashi and jump out to 8. Also I think that a (or even b) is possible. To me the shape of 1, 6, 7 looks like very passive, stolid play by Black. DaveSigaty

Bill: "Urgent points before big points." The top left corner is big (c or thereabouts), but Black 9 may be the dynamic spot. :-) The exchange of White 6 - Black 7 doesn't look so good, now. The White group looks thin to me.

Dave I had imagined handling 9 with 10. But if that is not enough, I think that 8 can be at a instead. Anything that Black can do seems slow to me. 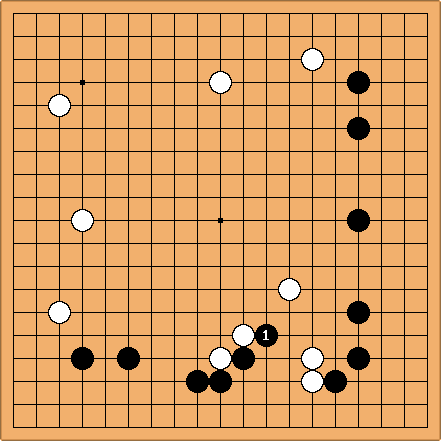 Bill: Slow but steady. ;-)
Having built a solid foundation, Black can be enterprising with the two step hane. :-)

JamesA: Isn't the problem with Black 10 not to do with whether White can invade with White 11 but that it develops on a much smaller scale than White. White can just continue building on a large scale, knowing that Black's framework is susceptible to a shoulder hit at 6. After Black 10, Black has no move that continues developing his position on a large scale.

Surely the move for Black would be 1 below, after which Black has good follow-up moves at a and b. Bill, why would Black rather have his stone at Black 10 than at 1 below? I can't think of a reason.

Bill: Excellent point, James! :-) Black's development after the extension of Black 1 is felicitous.

On the other hand, after Black 1 here, the tobi to a is relatively small. And if Black extends from the other corner to Black 3, White has more room to invade at White 4, say. I think I would extend to b, after which there is not much to choose between the positions, I think. And, as Dave suggested, White could play kakari from the other side. White 2 - White 4 is a possibility that takes advantage of the distance of Black 1 from that corner.

JamesA: I see what you mean. I don't think the vulnerabilities at c and d are too much to worry about though. White's position on the left side is only a framework, and still very thin. If White played at c or d Black would certainly get some payback!

Also, is it really attractive to have to make a two-space extension to b in response to a white kakari in order to hold the position together? It leaves the bottom right corner a lot weaker and doesn't completely solidify the bottom.

After 1-3, the black framework has weaknesses at a, b, c and d. Realistically though, White will only be able to use one of them. Black will attack that stone to solidify the rest of the position. In addition, Black can play e to shore up all those weaknesses at once and make an ideal framework. Black is also vulnerable to corner invasions on both sides, but the invasion would naturally result in a solidifying of Black's position.

To contrast, in this diagram Black has weaknesses at a and b. Again, these can be shored up with c. Again, White is only likely to get one of them. However, the lower right corner is a lot weaker than in the first comparison diagram. The lower left corner is equally vulnerable to an invasion. To summarise, I think the extra weaknesses created by playing 1 in Comparison (1) won't matter. White can only take one anyway and it still takes one move to fix them. The big difference would be the lower right corner. 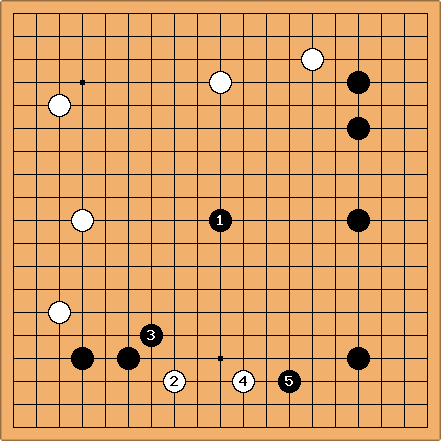 Dave - What I was most worried about was actually for Black to expand his framework faster than White. I was wondering what would happen if Black grabs 1 for himself. Granted 2 is a standard attack but that means that there are standard ways to handle it. I don't really know what is the best way to "plan" playing with or against a 50 point komi. Granted in this case it is to compensate for a significant difference in strength but it is still interesting to consider how White (and Black) should approach the problem. It would be interesting to play a game against an opponent of equal strength with for example a 35(?) point komi in exchange for 3 handicap stones.