Bill Spight: I have been curious lately about a simple notion of influence which radiates from each stone one point at a time. This "wave front" is absorbed by points under one's influenced and canceled or blocked by the opponent's stones or wave front. The following diagram shows the stable result after 6 time steps. (For clarity not every point on the wave fronts is shown.)

(This position is taken from Move31Game1.) 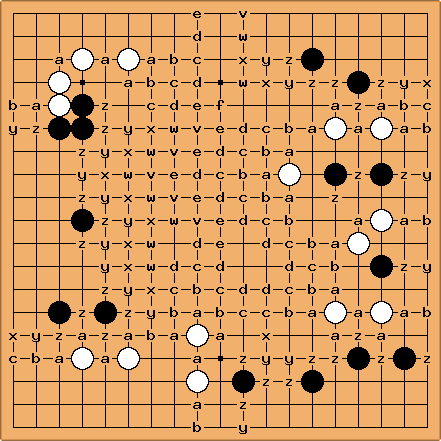 Letters at the beginning of the alphabet indicate White's wave front, those at the end, Black's. At the first time step the waves radiate to the As and Zs, next to the Bs and Ys, etc. The next diagram shows the boundaries: circles for White and squares for Black. 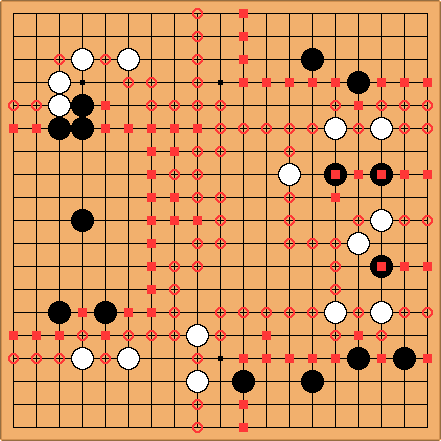 HolIgor: My first impression of 40 points advantage was a good laugh. But then I thought, why not? I am very insolent making three-space extensions on the opponent's side. And usually the opponents invade. But here Black invaded twice. There should be some justice. I mean, White has to have some compensation. Perhaps, White really has a lead. Not 40 points, taking into account the fact that nobody is dead yet, really, but some advantage might be onWwhite's side. :)

Arno: Of course, the wave method is not really good advice. Black would play to the lower right of tengen and would be ahead in influence by 20 points. That's almost like the ear reddening move :o)

But to be fair: for Primiview, an Amiga SGF client I wrote years ago, I used a similar function. There was a weighted 7x7 matrix which was applied to each stone. Black stones added those values to the position, white stones subtracted. Given a certain threshold the position was declared white or black territory. Stones could even be killed that way (i.e. a lone black stone near a white wall).

The fun thing: although the result sometimes looked rather funny and huge pendulum swings at each play were possible, the actual score (difference) was rather accurate. Most of the time better than my shallow counting of the position.

Michael Eisenberg: This sort of analysis reminds me a bit of Bouzy's Algorithm (an algorithm for estimating territory used in GnuGo, and possibly other go programs). Bouzy's algorithm is not suitable for human use, as far as I can tell from my very brief investigation (which basically consists of having skimmed this page:

You may have noticed that the wave front assigns each point on the board to the color of its closest living stone. :-)

Michael Eisenberg: Yes. A more sophisticated influence function also ought to take into account the number and strength of the nearby stones. Clearly a wall is more influential than an isolated stone.

Kungfu: Interesting idea. A similar sort of idea is linked from my homepage (update: I have removed the link to MagneticStonesIdea from my SL homepage because I don't support that ide any more. Instead, I focus on reading out now. I view the magnetic stones idea pages as promoting sloppy reading nowadays. I'm almost sorry I wrote them :)

BenAxelrod: On a side note, this method seems very similar to the A* path planning algorithm.