Do not defend territories open on two sides

Territories which are open for attack at two sides are not territory. Therefore they should not be defended as such.

Bill: Besides, they are only moyo anyway. ;-)

Imagine defending first one side of your 'territory', then the other. There will not be many points left inside, and in the meantime your opponent has solidified on the outside and will gain more than your points inside.

Bill: This kind of position may be considered miai. Imagine

(or vice versa) in any order. (Not that the play will be on exactly these points, but you get the general picture.)

, White probably does better to invade. That's why I added it.)

Territories which are open for attack from both sides are in practice those which are based on the fourth line. Remember that stones are there because you chose in the first place to play for influence rather than territory . If such a territory is under attack, you should accept the fact and use your influence either to counter-attack, or to press the invader into a low position. 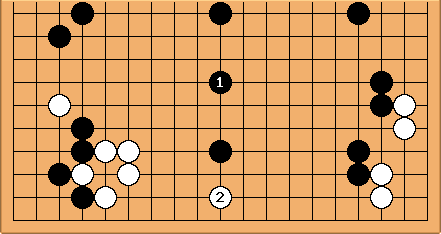 From a nine-stone game in which I was White. In a position like this Black played

and announced 'a nice bit of territory'.

isn't so bad, but after

there isn't much edge territory to be proud of. 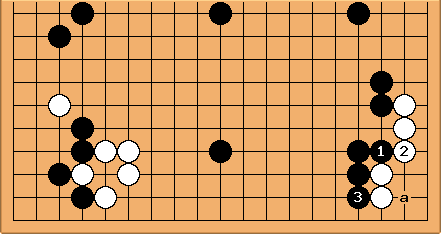 I would have been more impressed if Black had played

first. These have an effect on the corner, threatening a. Black has an open skirt here on the right. Good sense in go means not playing for territory where your opponent can immediately jump into it. 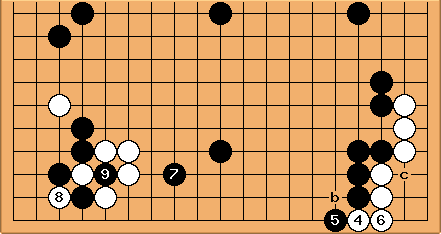 is natural to settle the corner. The good feeling for Black now is to play

as an attacking play, before coming back to deal with the cutting point at b. Again, Black shouldn't try to complete the territory on one side when White can simply slide in on the other side. White is likely to start the ko with

In any case Black is taking aggressive action to deal with the open skirts. This should be much better than trying to complete the open-skirted territory.

aLegendWai(9k? KGS): I have some questions. If "b" is left open and the enemy gets the chance to invade:
1) How could black defend?
2) Roughly how many points does black lose then? 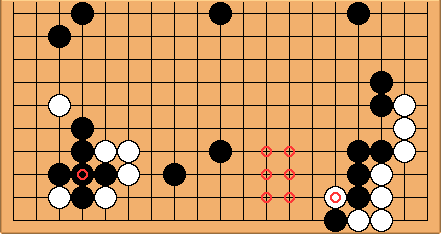 Charles OK, it is reasonable to ask about this sort of position, in which Black has won the ko with

, and White has played

which is very big.

Firstly, Black should not feel under pressure to make territory near the circled points. A white play there is big, but not very threatening. Black has done well on the left, where there was a potential weak corner, at the cost of points on the right where Black was and is quite thick. This is good strategy for thickness: employ it to make territory somewhere else, and it may still make later points in its own right. 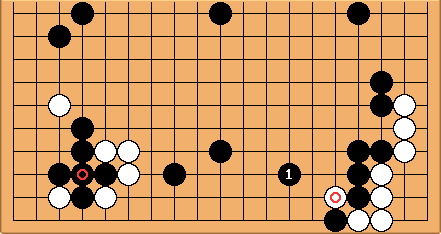 Therefore I say that 'how many points does Black lose after

?' isn't really the right question. Black has gained many points - perhaps 30, on the left. If

is played then Black limits what White has achieved. I feel that