This happened in a game of mine. I am White. Please review. 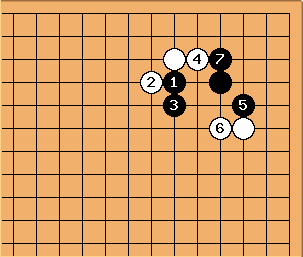 White had played the double approach to the star point. Kogo's Joseki Dictionary[1] says that Black should get out with the kosumi (on the other hand, actual practice says.../Modern Double Kakari).

However, he attached with

I expected him to play at

, because if White then cuts, Black sacrifices

and walks along the fourth line.

To my surprise he played kosumi-tsuke and, applying my basic instinct, I extended with

. He then blocked the corner, leaving a very tempting cutting point.

(From the point of view of standard shape,

should be played one point lower. Charles Matthews)

As so often, I muttered "must ... resist ... temptation" (c) Dilbert, but I fell for it and played the cut. Let me first show the alternative I had in mind. 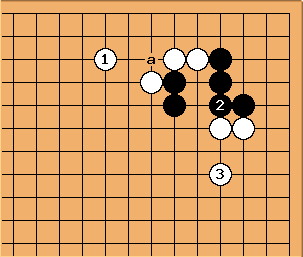 reinforces the group and protects against the cut. Black must come back to protect against his cut, and then White plays on the other side. One cannot deny that the Black group has awkward shape; but on the other hand, considering White having played twice in a row and Black playing what seemed to be a bad move (

in first diagram), I felt this variation to be too soft. 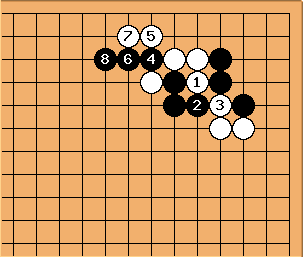 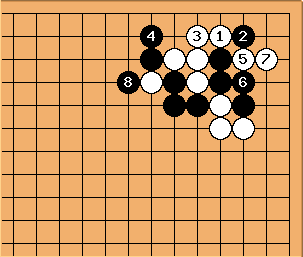 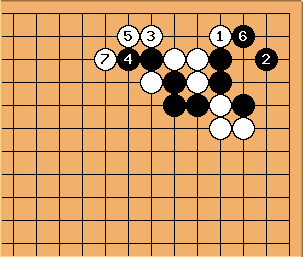 Black took some time to play

, which indeed seems to me the strongest move. 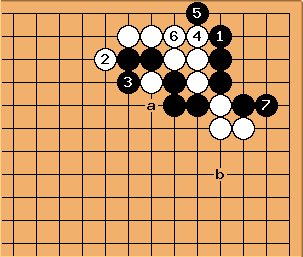 This was the alternative for

in the previous diagram. Now White is faced with a soft option b and an aggressive one a, which again seems best. 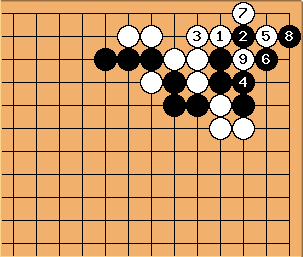 Making ko in the corner was a very attractive prospect. 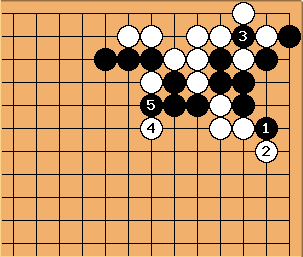 were intended to be local ko-threats. 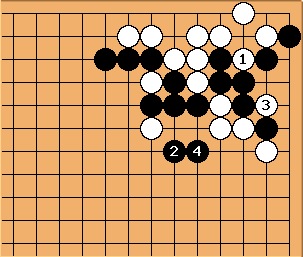 dissolved the ko with relatively good aji and Black's influence seems inferior (but not much) to White's 30-point corner. 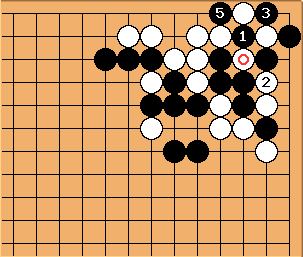 Still, White will soon have to capture the cutting stones, otherwise Black either makes a small life in the corner, as in this diagram, or ... 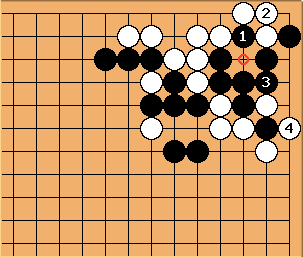 ... turns the corner into an approach ko.

DaveSigaty: I think there is no ko here. Black cannot make an eye in the corner, and cannot squeeze White effectively enough on both the top and the right to prevent White from capturing the black stones in time. 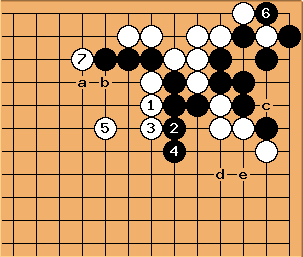 DaveSigaty: I am wondering about White playing at

here instead of using

as a ko threat? After

looks like just the right spot (if Black a then White b and if Black b, White a follows).

it does not look like Black can attack the right side white stones very effectively, while the capture at c remains. If Black d, White e looks good enough and if Black e then White can cut across at d.

If Black plays on the left after

to retake the ko.

Always one should seek the most simple variation. Reading this page I felt the need to add it myself. Usualy simple is best, there is no need to think complicate unless the simple things don't work. So... 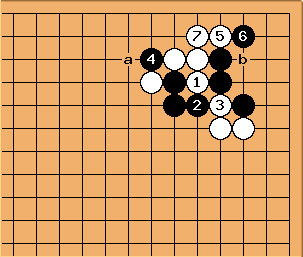 White is afraid of the cut with

because now he doesn't have a liberty anymore at

. But still Black cannot cut with

. All White has to do is play hane with

This is the same as Holigor's first diagram. He added a few more moves and I have to say White is definitely better in that diagram. Her territory is better than the black influence. And further, she has sente. Even if the ladder works for Black, White can always play a ladder breaker. 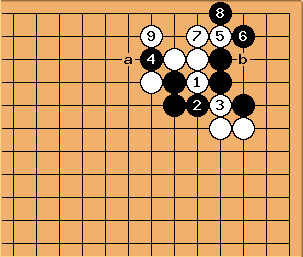 The only problem seems to be

. But now White plays atari at

and still has a and b.

The idea in this position is that the black corner is too weak to attack White. And that White should not play atari on the stone

until she knows which atari to play.

Rich: Going back to the original position, it seems to me a good way to show up the deviation from joseki (depending on the surrounding conditions, of course) is to play where the opponent 'should' have played: 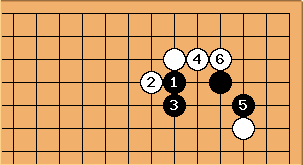 Is this not simpler, or have I missed a killer response for Black? 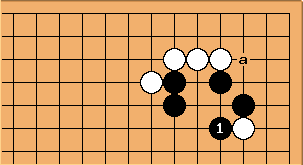 You could argue that White now at a is a trade of territory for influence. 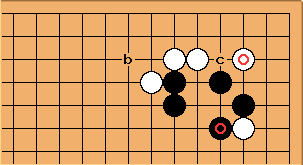 Now White could take sente. If White wants perfect shape round here, White at b is good. Certainly a stone at b does much more work than at c.

Going right back to the start: 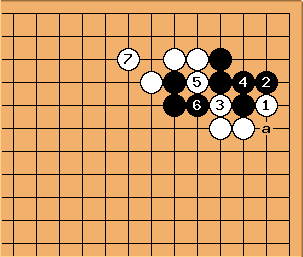 This is a way for White to start an immediate fight in the centre. Since White's connection at a brings the corner close to a carpenter's square shape, this seems OK for White.

In fact this isn't bad, developing on both sides.

Rich Thanks, Charles; that final pattern looks nice. I was thinking of exchanging territory for influence; the reason I decided against the 3-3 point you showed in 'a better trade', was because the push at c seems to give the cut or the corner to black. Given the aim of the choice was territory, the corner should then be kept, surely? 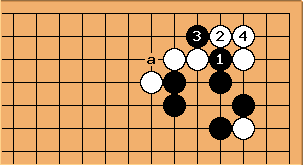 Anyhow, at this point it gets complicated, which was what I was trying to avoid... :) It's my mid-kyu timidity, you see... 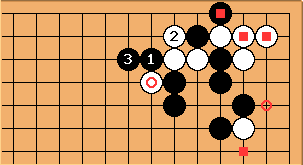 Charles I don't know about 'complicated'. Giving up stones like

here is actually a way to simplify things. Consider that White has already taken sente once here. I'm assuming

of the previous diagram played at the 2-2 point instead. Black can play

atari if he wants and get an answer.

White takes sente again. There are the two marked points on the right side, for later. And certainly

The main point is that Black has played one more stone here than White, now (i.e., looking at the local tally, you expect Black to be doing better).

Charles Alarming to me to think that Kogo's is cited as an authority.