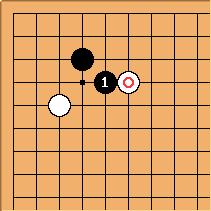 Suppose I want to practice taisha joseki. It seems to me that I have never played it in my life. And now I want to see what's in it. It is possible that I will like this type of fight.

But my opponent plays 1. This is not any taisha.

Taisha refers to White's play at the circled stone. Black 1 is one of Black's options. -- BillSpight

Usually I proceed this way: 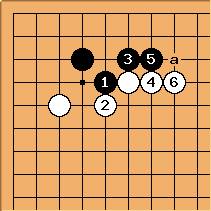 In the diagram White has a wall and Black is low, so it is not completely unsatisfactory.

In fact, it is joseki so far. Black should continue at a. A white magari there is big. -- Bill

DJ: Other than in Ishida's book, one can find a little more on this variation in the page I have created on how to avoid the Taisha

But playing this several times suddenly I was enlightened and saw ... 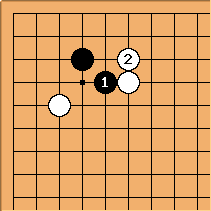 ... that basically White can play 2 here and try to develop on both sides of the black group. 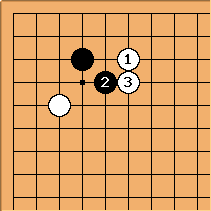 The position reached is a common result if White starts with a one-space low pincer instead of playing taisha, so it's certainly an option to consider. 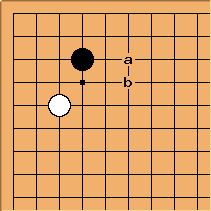 As Matthew says White 2 in Dia 30 transposes to the low pincer. It is worth remembering that the low pincer (a here) is normally based on a white position in the upper right. On the other hand the taisha (b here) is normally chosen based on a white position in the lower left. So the transposition should be used when White can benefit from such a significant change in strategy. 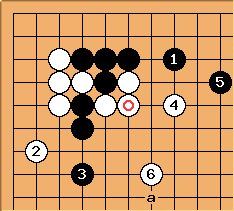 When we reach this far after White connects with the marked stone, Ishida calls the continuation shown here the basic pattern (although a lot of alternatives have been passed up to get to the marked stone and he gives five alternatives just to White 2!). With 6 (or a) White begins the main strategic idea of driving Black down the board. For this to be fruitful White needs some help in the lower left. --DaveSigaty

Those 'five alternatives' are for the most part trick plays, passed down in books, rather than real moves from current pro go. Or so I thought before making that page - all a bit more complex when you look at it closely. Charles Matthews

I think the above remark by Dave is actually 1000 times more valuable than knowing whether or not you are playing the taisha. You choose your moves in the opening according to the stones already played, and applying basic strategic principles. If your choice happens to be one falling under the category "taisha" in your joseki dictionary, that's fine, and knowing the variations in order not to fall for any trick move, may be a powerful tool. On the other hand, if you want to play a move that feels right, but you can't remember having seen it in any joseki variation, so you play another move because that one does appear in such a variation, you have stopped playing Go at that very moment.