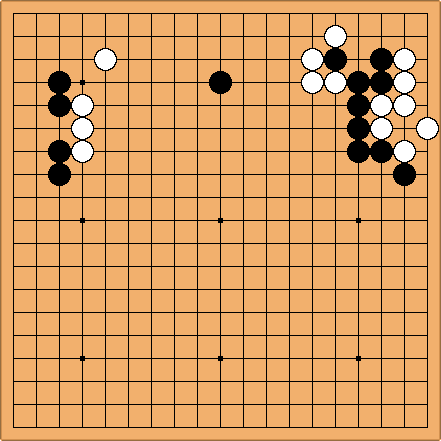 This position arose after White's 3-5 move in the second corner, the upper left corner, and Black's immediate approach. See How BQM26 appeared.

The question is who's better and what is the next move for Black?

I have my own opinion, I want to see what other people that are better than me in the opening think. I shall post my opinion later.

Black is better, I believe. He has a nice wall in the top right, while White's corner is low and small. White's stones by the wall are heavy, and are hampered by 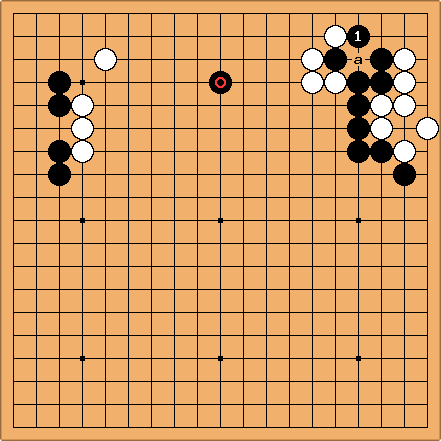 HolIgor: I played Black in this game. I also think that Black was better at this moment. Though I gave

on Bill's diagram a thought, in the game I connected solidly at a. The purpose was the same - to keep White separated. I think now that Bill's move was better.

In my opinion Black is better because he has two thick groups on the sides while his light stone in the center is not really threatened. It has a lot of options for development. On the other hand White's groups are heavy without much prospects for any territory.

One more note. This also comes from a pro comment. They are scattered in the books and sometimes that's what you need. 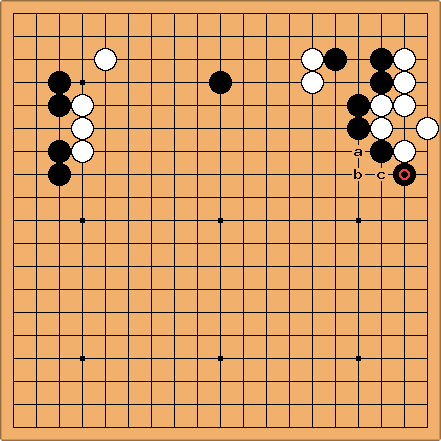 Black sacrificed a stone and made a double hane using the sacrifice. It is time to connect. What kind of connection to apply? And where? Should it be a, b or c?

The pro's advice in a similar situation was to play a even if the marked stone might be cut off later. He gave the following reason :

was kikashi, and kikashi stones should be treated lightly.

I played a partly because of this advice but mainly because I did not want any kikashi or other kind of forcing move from the center. The wall had to be thick in that direction.

JoelR: I agree with all that Black is better here.

I am weaker than HolIgor and Bill, and I was surprised to see a local play suggested here. After a, I would expect b, and Black needs another move on the top. Whereas now Black seems to have a free move, so he might choose c or d. Unable to decide which, I might play 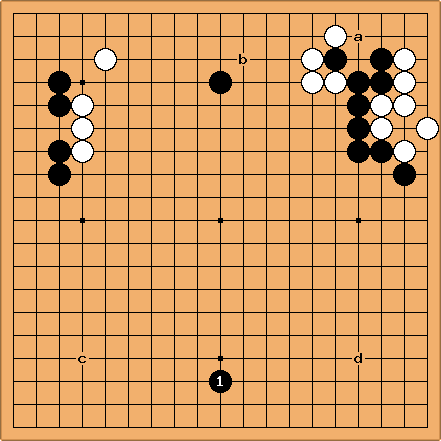 Charles I find this a somewhat strange idea. As if all Black has to do is to negate White's prospects.

Well, in a sense

does that. But I can't imagine playing it in a game.

PurpleHaze: If you read the heading on the diagram it says position after White 30. As there are only 25 stones on the board and 1 Black prisonner, we can conclude that there are 2 White and 2 Black stones in the bottom half of the board that are not shown. This also makes more sense of the fuseki, as otherwise there must have been moments when playing in a bottom corner would be much larger than the move played. 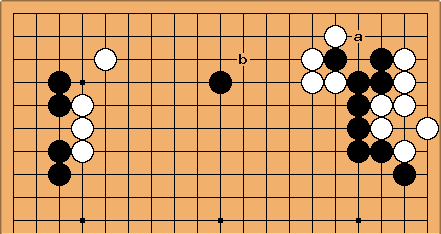