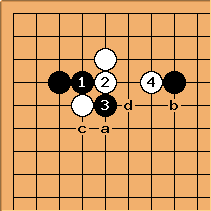 When Black cuts through the White pressing move instead, with

, the position will become difficult for White if she fights on the left. Instead

is normal, trying to set up a driving tesuji.

Black has a choice at

a - the common joseki 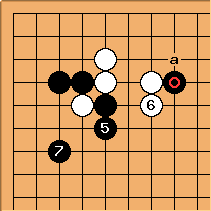 net, White at a is honte, but White could consider pincering Black's marked stone.

b - The driving tesuji 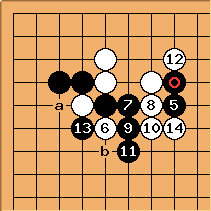 If Black continues with the obvious looking

both a directly play at

or at b is possible too. There is room for complications with

It has recently (after 2005) been seen more often again in professional play. 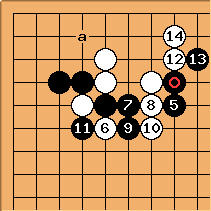 Both given (and some more) variations are included in Takao's Joseki Dictionary.

Why White does attach with 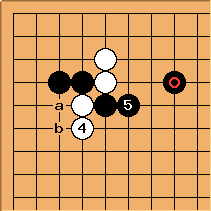 here, which is an obvious move according to crosscut then extend, is hard to play. White at a and b have been tried instead.