Push the enemy towards your thickness 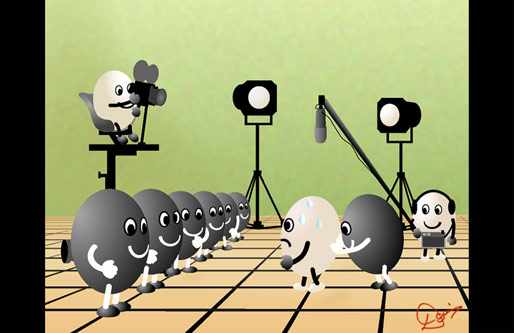 Alex Weldon: Important caveat: in the case where you're trying to decide from which side to make a checking extension, this proverb may not apply. If pushing him towards your thickness allows your opponent to make an ideal extension from his stone(s), it may be better to approach from the direction of the thickness. I suppose you could say that the reason for this is that if he makes the ideal extension, it isn't really a weak group after all, and letting him make a solid base right in front of your thickness seriously erodes that thickness. This is probably obvious to stronger players, but I've seen beginners quote this proverb as a reason (or excuse) for making this sort of mistake.

Andy Pierce: Also, it depends on whether your "thickness" really is thick (has eyespace and/or shape) or is just heavy (doesn't have eyespace/shape). If it really is thick, then you can push the opponent right into it even if he does get to make a (relatively) easy life with an ideal extension. This allows you to build thickness on the other side. Sooner or later you come to the other edge of the board, where your encroaching thickness can lead to either solid territory, or a decisive attack. If your original "thickness" was really just heaviness, then better to make some territory with it directly. (one kyu's opinion anyway)

BobWhoosta: It would seem to me that even if your opponent can make the ideal extension for his position you would still force him in the direction of your thickness, since his stones are then in a position that is difficult to develop further. In this situation the stones you use to force your opponent in this direction "should" be taking profit of some kind, whereas the stones your opponent is laying down will not be. Also, a good extension is not necessarily life, and the group you are pushing towards your thickness will generally need to fix in gote later or risk further attack. If you extend from thickness, even to prevent your opponent his optimal base (and also considering how far this extension from your thickness might be) your opponent will most likely lean on the extension stone and build thickness for himself while over concentrating you. Then instead of your opponent getting a single stone in "optimal position" you have the unfortunate result that he has completely settled his group and left you without a followup.

All of this is of course based on individual positions, and I'm sure that extending from your thickness can in some cases be justified. I just think this proverb is too foundational to go about coming up with caveats willy nilly-like.