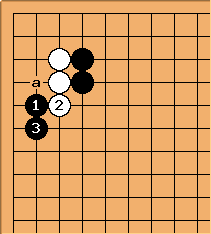 The armpit hit of

is a special continuation for when Black has superior outward influence and intends to either kill or severely attack White.

at a due to a tesuji. 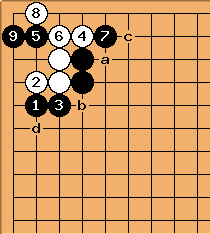 due to Black's tesuji at

. The diagram shows one possible continuation after Black's tesuji. White may attempt to cut at a or b, or clamp at c, however in order to initially play

, it was assumed that Black's outside influence was already sufficient enough to handle any running fight. If these continuations are viewed as too dangerous for Black, then he could even pull back at d, instead of playing

. Therefore, these resistances by White are likely to fail.