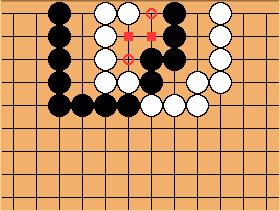 The circled liberties are shared, while those marked with a square are exclusive, but still considered inside liberties, because they are in between the two groups.