An approach to a corner stone along the fourth line (hence "high") and separated from it by two spaces.

The outside contact play Black d is less common, but a rich source of less-explored pushing battle variations: see pushing battles in joseki 9. 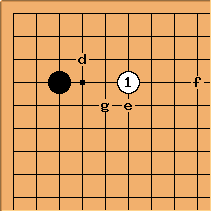 Less usual answers are at d, e and f.

For d see light play example 1. This approach was played in the nineteenth century, and became popular in Japan in the 1920s. It has recently been in fashion again.

In the 58th Honinbo final, game 1, Kato Masao plays g against Cho U