It's official, I'm heading to go congress this year. In addition to myself, my two Go-playing brothers will make the trip as well. This will make the drive (yes we're driving ~1000 miles from Minnesota to New York) a bit easier with multiple drivers.

Sort of the first question was one of rank. I play go on several servers, with fairly inconsistant results. Entering the tournement we all must decide on our provisional rank. I also play very regularly at our club, but alas the club meets purely for recreational purposes. The only measure I have for my club rank is how I fare against the players who have played tournements previously.

Tim, around AGA 3d, has indicated that his estimation of my strength is around 1 kyu. I can't help but feel this is partially due to my adjusting to his playing style. We've been playing 3 stone games for a few months. However, my Kgs account has been floating around 5 kyu, but has a general trend to always rise.

As the rating is provisional, I've decided to to split the difference and enter as a 3 kyu. We'll see how it goes.

Sort of the second question is how to best prepare for the tournement. I currently feel I have a couple Joseki holes to fill. I generally lack a good response to:

Unfortunately I've been somewhat lacking in time to study, so I may be cramming a bit.

Besides touching on the aformantioned joseki, I've practiced recording my games several times during the last week. I've been using the red & black pen method described on How To Record A Game. I feel it will be a great benefit to have records of my tournement games.

It should be noted that I do own a pocketPC with software capable of recording sgf game files. I have decided not to use this kifu recording method for several reasons:

I find my pocketpc, when used as an sgf recorder, to be more distracting than paper. For battery saving reasons I have it set to turn off the backlighting if not used for 1 minute. So, just when I start to really think about a particular position, the ambient lighting changes - and I'm reminded of the fact that I've thought about the current move for 1 minute. If I don't move within 5 minutes, the display turns off - also distracting.

After reading the aga congress policy on digital recording devices, I feel the use of such a device could prove burdensome if an unfortunate event occurred and I was ever accused of cheating with it. The hotel where the congress is held has wireless internet access in all of it's meeting rooms. The aga congress policy is that I can use my device, but be willing to prove it's only use is that of a recorder and not to, say, lookup a joseki line at senseis.xmp.net, etc.. How can such a thing be proven?

In general, I've found the rhythym of movement to be easier with paper and pens than with the stylus & palmtop. Use of a clock, however, seems to make either kifu method feel very clumsy. Hopefully, with a bit more practice this too will begin to feel 'normal'.

Otherwise, I've prepared my car for the trip, topped off the fluids, etc... We plan to leave friday morning, arrive early saturday and catch up on sleep before the tournement starts on sunday morning.

Cruzz on 29.7.2004: I guess this is just nitpicking, but to my knowledge August 2004 is still in the future so unless you have a time machine the dates are slightly inaccurate

Joshual000 too many late nights, thanks.

Trying to make life in the corner B0 felt awkward, but seemed to work out ok... 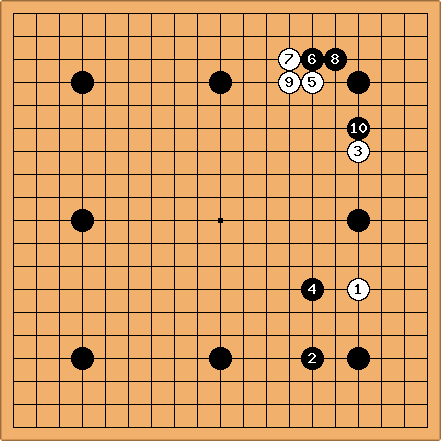 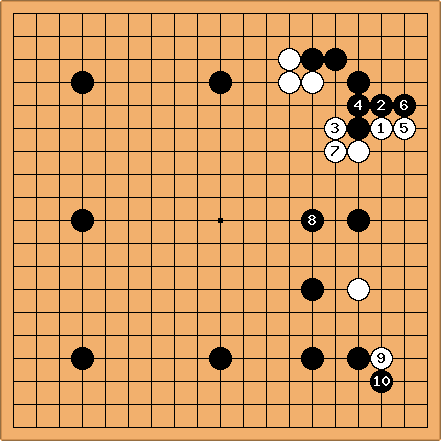 As I look back on this game, the more I realize

maybe should harass W a bit more, a 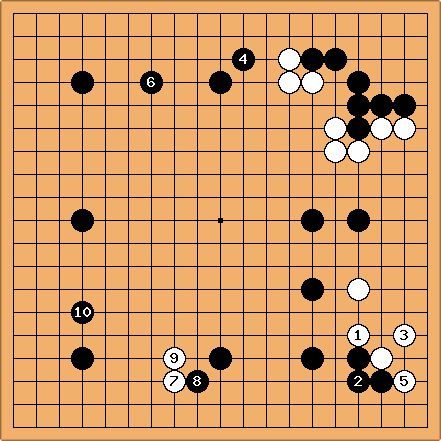 trying to make some shape... 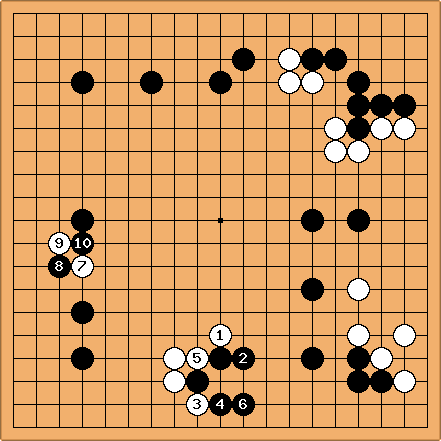 So I'm just making thickness and trying to stay connected.

erases the corner, leaving the thickness as my only hope for real territory. 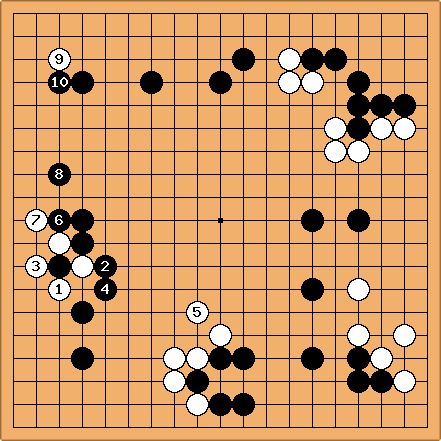 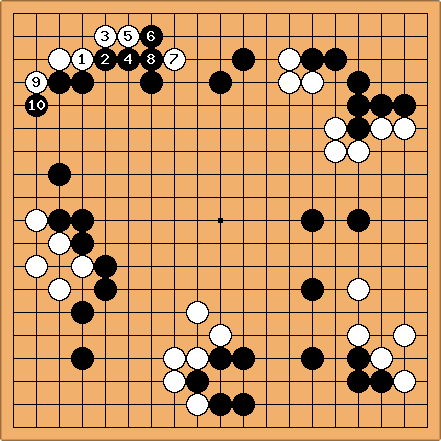 So I used a move to try to make territory with the thickness, but it meant ignoring 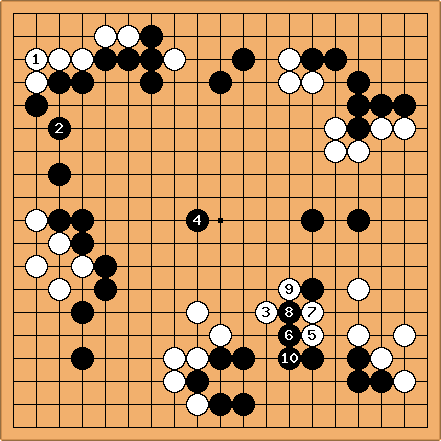 So in the post-game analysis,

is the move to receive the most criticism. If B just jumps out with

) I can probably manage to avoid fighting for life. 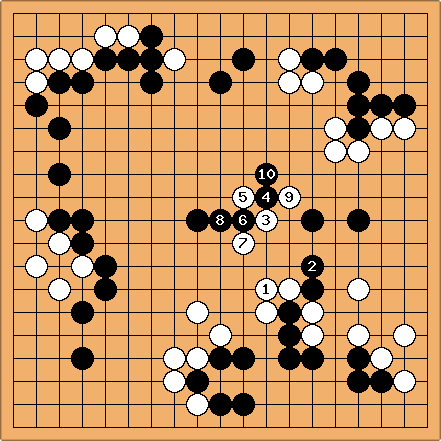 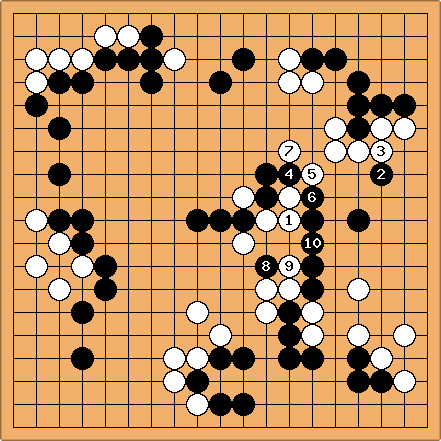 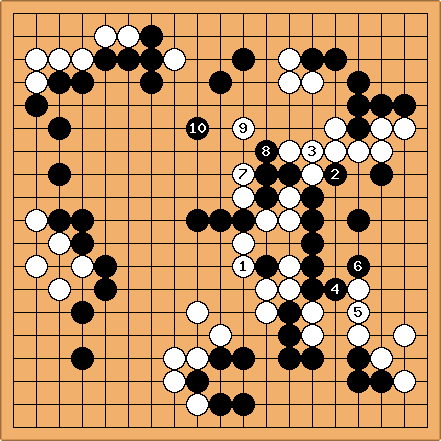 sequence I couldn't forsee (heh, imagine that). I had always pictured getting an eye in this space where W has managed to nearly build one. 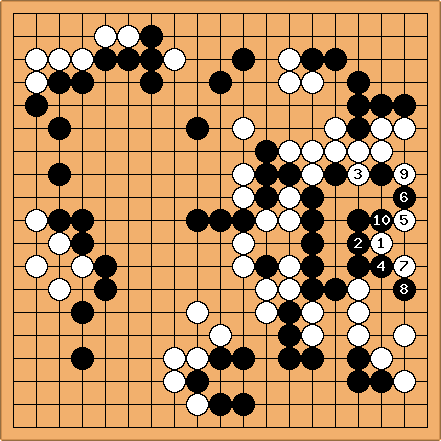 At this point I couldn't see a way out, so I resigned. 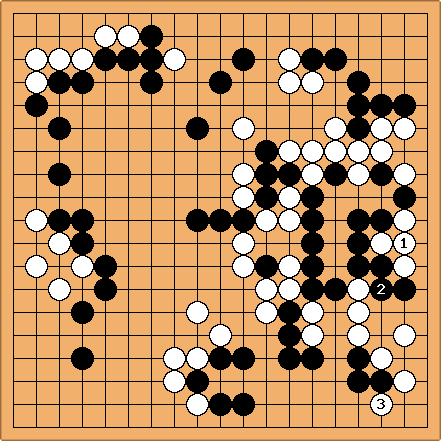 However after I resigned the game, Jinyeul Park showed me this line saying I could have killed the corner... lived, and probably won! 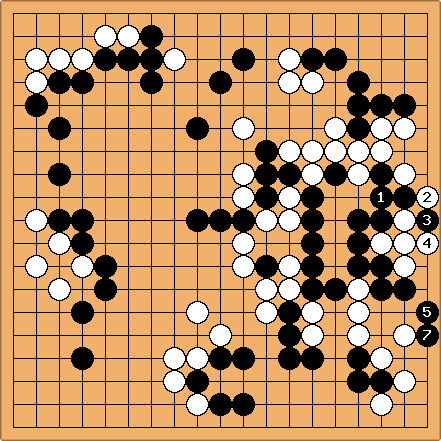