Black in this game from 1842 was Honinbo Shuwa; White was Inoue Genan Inseki.

at a would be a regulation wedge, with clear space on either side sufficient to make a two-space extension (to b or c). Black rejected this type of miai thinking, instead playing at

You could call the wedge variant

a 'perverse wedge' in that it rejects a perfectly good chance to break up White's side framework, in the hope of something better.

In fact there are a number of such techniques seen from time to time in pro games. Yi Se-tol and other Korean players have shown themselves fond of using them.

5 kyu: A wedge is also used to disrupt a potential framework. In this case, since the

stones are low it is more important to more directly try to limit the white stones with more potential for development on the left.

at a would be easier if the object is just to get a base on the side. 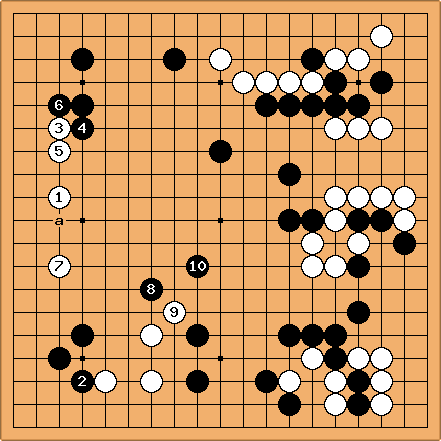 (rather than a) requires explanation. One way to look at it: White's group in the lower left is weak, and White is making a second weak group in the same general area. It makes sense to position it a little further away, to reduce the severity of a splitting attack. Black anyway has a perfect attacking combination with

Dave Sigaty: I think that alternatively this page might have been named Wedges with Edges :-)

As somebody said (but I forget who), "Good will only take you so far." The cases above all show White or Black rejecting the proverbs, rejecting the rules of thumb that guide us to "good" moves at the amateur level in order to find something better (as Charles said) - something competitive at the professional level. The challenge for us, I think, is to try to understand why and try to apply such understanding to our own games. The moves are perverse only as long as we do not grasp a higher understanding of the position that rejects the "standard" move. Here are my guesses as to why the choices that we see were made in these cases:

I imagine that Shuwa had something like this variation in mind when he chose a in the game. White plays from the left and when Black extends to

he "forces" White play 4 in order to secure his group.

is an attractive move: it builds a large, secure corner and undermines Black's right-side group. However, by itself

is slow. White can't afford to play such a slow move early on. The problem with my analysis up to here is that it seems like at this point a black play at b would be very powerful for Black. Does this mean that White would first have to play something like c after

later? If so, does this invalidate my whole explanation? :-)

I imagine that when Black chose a in the game, he was not willing to have White play

in answer to the "standard"

. White has made one wall of the pillbox formation with the 3-5 and 5-5 plays on the left. These do not yet enclose the corner but they are perfectly placed for a fight along the top. Meanwhile the extension to

are begging for White to return to the upper right and enclose it with a play at b. If Black plays at

, it would be self-delusion. The extensions at 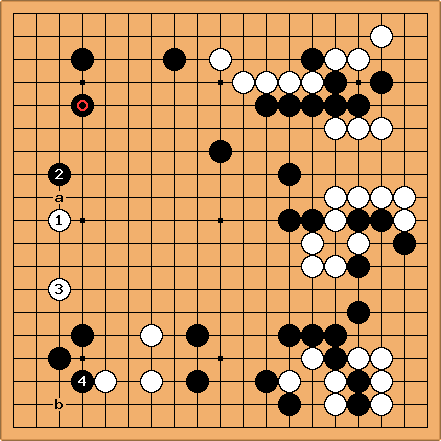 . When Black approaches from the top,

has an excellent relationship with the marked stone above it. When White extends to

, Black is "forced" to play

, which he very much wants to play. As long as White is able to slide in at b, Black can not attack on the bottom. Once White plays anywhere on the left side, Black has to take care that a slide to b by White does not take away the base of his corner stones.

Here's another example - this time with a high-level explanation from the player. 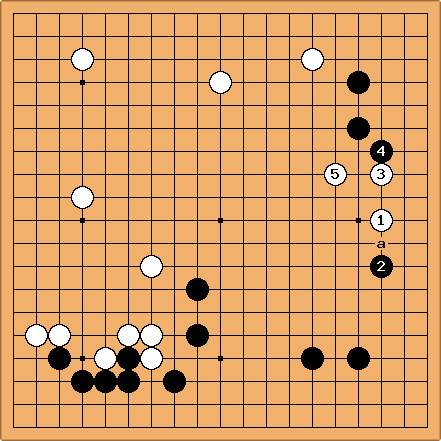 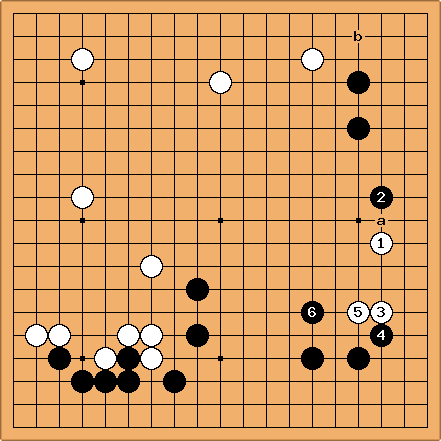 I always think that the perverse choice signals what the player dislikes. In this case when Cho played a in the game instead of

here, I assume that he disliked Black's approach from the top at

. If White tries the standard two-space extension, Black does look like he has the initiative (sente) after

. In addition, the follow-up at b on top will work perfectly with

if Black has the opportunity to play it. -- Dave Sigaty