This is sometimes called a mole play (supposedly from the Japanese), and should not be confused with "subway go".

On the edge of an open skirt, you see.

is the skirt approach. Black might also respond at a.

White plays this way, probably, to gain life in a black framework, avoiding the diagonal attachment.

here won't kill the white group (the 3-3 point is still open), but is a good play for central influence.

Submarine plays accord with the current fashion for a sharp, territorial style (the 'Korean way'). 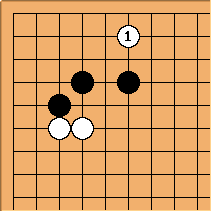 This is a submarine technique that appears quite often in pro play. 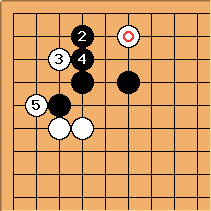 If the game goes this way, White has managed something interesting by getting Black to answer the 3-3 invasion at

emeraldemon: The following are pieces from QuickQuestions that I've ruthlessly ripped out of context and placed here for convenient perusal.

Kenn: This occurs a lot in handicap games between myself and dan players at my club, sometimes even as the opening move (as depicted). I am usually not sure what to do, and play a or b. Are these moves bad? What would be good?

Bill: Both are OK, as well as c - h. Ba is strong. It puts pressure on

In a teaching game, I like a. It shows spirit. I would also be impressed by tenuki. After all, the exchange,

, early on in the game favors Black.

AlexWeldon: re: the 3-4 contact under hoshi Well, the contact move is a middlegame invasion joseki, like the 3-3 invasion or the submarine invasions at 2-4 or 2-5. It has more in common with these moves than it does with the keima approach, which is more of an opening joseki.