Path: <= All you ever wanted to know about sekis =>
Difficulty: Advanced   Keywords: Life & Death

A parity seki is a special kind of seki where one of the players can remove any of the shared liberties in sente so that the other player must reply by removing another.

The status of such a group is decided by the parity of its shared liberties:
If there is an even number of them, the situation is a seki, otherwise it is possible for the side with the sente moves to kill. 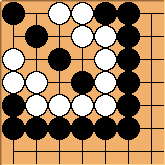 This is a parity seki. White can remove any pair of liberties in sente, but finally one pair remains and the result is a seki. 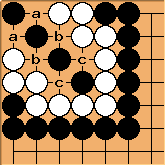 The liberties come in pairs so that whenever White plays at one of the lettered points, Black must respond at the same letter. 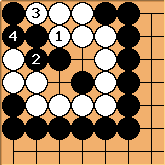 White can remove any pair of liberties whenever she wants. However, after each black response, the liberty count is restored to an even number, and finally, there are only two shared liberties left, and the result is a "regular" seki.

Actually, any white play here is an unremovable ko threat that does not lose points. To see why, let's take a look at what happens if Black tries to play here. 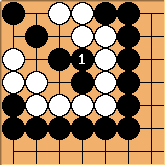 If Black removes one of her ko threats, the parity becomes odd. Now White can kill, because after each white threat and black response, the parity again is odd. At the end, Black would have to play a self atari. 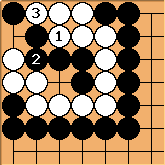 , Black cannot connect because of a lack of liberties. 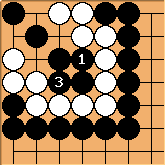 If White does not kill Black immediately, Black can restore parity to even, and the position is a parity seki again. So, it could, in theory, be possible for Black to play here all alone, alternating the status of the group between seki and killable.

In reality, Black should of course stay away. 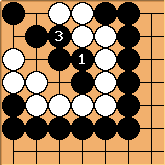 If Black got two moves in a row here, then he'd better make a regular seki instead. While White still has two ko threats, now one of them is removable, and the unremovable one will cause a big loss if Black responds.

Robert Pauli: I don't get it (what follows assumes

made). If White adds a stone, Black has to connect (works always, whereas his "square" only in response to her "square"). That's one ko threat (wouldn't call it four). First there was no further to me, but seen strictly, her (or his) self-atari is one too, though rather bizarre. But why is only one of them removable? If Black forestalls White and connects, no ko threat at all remains (only three shared dame). Removing a ko threat doesn't necessarily has to put a stone on the same spot the threat would. I wouldn't call this seki "regular" either since two dame in it are poisoned only for Black (his "squares"): it's still a parity seki. 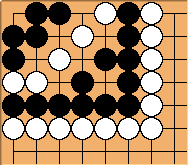 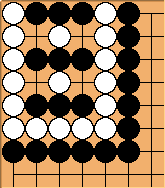 Kudos to asmobia for this shape.