The most difficult problem ever

The most difficult problem ever. Igo Hatsuyoron 120

The most difficult problem ever. Igo Hatsuyoron 120 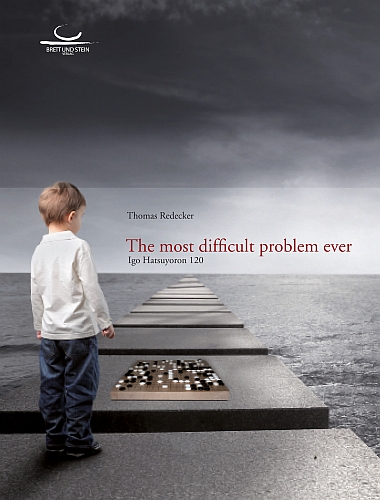 The "most difficult of all Go problems", created by Inoue Dosetsu Inseki (1646 - 1719), has still not been solved by professional Go players. Has the long-standing collaboration of three amateurs from Germany, and the United Kingdom, now found the answer?"

This book presents the most profound analysis of the famous problem of the Igo Hatsuyoron. It summarizes the early research and reveals the latest findings, apparently destroying the known solutions.

The Reference Path p.11 In this chapter, we explain the professionally confirmed sequence with the strongest moves for both sides. White wins by two points !!!

Variations of the Reference Path p.19

Key Results p.51 In this chapter, we present in chronological order the main results, and findings.

The Decisive Moment p.63 This chapter explains, in detail, the move (an Oki), which lead to the refutation of the known (professional) solutions.

Hidden Aspects of the Oki p.69 In this chapter, we examine various aspects of the Oki, which we think could have been responsible for the effect that the professionals did not use it at the decisive moment.

Guzumi at Top Right p.75 This chapter explains the consequences of the move (a Guzumi) overlooked by professionals, which we think gives the victory back to Black.

Additional Results p.87 In this chapter, we consider some earlier commentaries concerning the Seki in the lower right corner.

After the Guzumi - Our Solution p.91 In this chapter, we explain the main variations after the Guzumi in the upper right corner. Our solution ends with three points for Black.

About Approach-Move Liberties p.119 This chapter explains an effect, which is important in conjunction with the Guzumi.

About Hanezeki p.123 This chapter explains the problem's element in the lower right corner.

A Summary of Our Solution p.127 We wrote this synopsis primarily to give an outline of our solution, but also to highlight some of the problem's main features and interdependencies, in an attempt to clarify the structure.

Postscript p.138 After the book was in final proofs, we heard about a recently published book, "Research on Weiqi Fayanglun", by Cheng Xiaoliu 6p. This is an updated and extended edition of his 1988 book "Weiqi Fayanglun New solutions". It was too late to integrate his findings, concerning problem 120, in our book, so we give a brief overview about his results here. Some more of our findings (but not all !!!) can be called "professionally validated" now.

Review: The most difficult problem ever / Igo Hatsuyoron 120

Probably Igo Hatsuyoron is the most difficult classical problem collection, was compiled by Dosetsu, started as secret study material for a few first class players and is said to have been written in 1713. The whole board problem 120, which is the book's only topic, was rediscovered by Araki Naomi to be published in 1982 by Fujisawa Hideyuki (Shuko) 9p. This problem is the by far most difficult classical tsumego problem but the book title overlooks more difficult non-tsumego problems. The problem is so difficult though that some thousands of manhours of research have not proven a solution yet. The book presents a new solution but problem solving consists of another, here still missing step: the verification beyond doubt (when the book says "professionally confirmed", then that is also insufficient). Thousands of already studied variations are necessary but insufficient; there needs to be complete logical linking between all of them on a level above trivially immaterial variations. This, however, is not easy because #120 requires interesting subtrees starting from counter-intuitive, partly bad shape plays. On the other hand, the book's solution seems to be the currently by far best understanding of the problem.

Maybe the problem remained hidden for centuries because editors suspected a mistake in the problem position and could not discover its central topic. Modern study of the problem started with 1,000 manhours by Fujisawa and his study group to reveal that topic: a hane-seki with a 20 stones tail in the board's center. To 1988, Cheng Xiaoliu 6p worked on the endgame and later continued partial studies. In 2005 Joachim Meinhardt 5k, in 2007 Yamada Shinji 5p, in 2007 Thomas Redecker 1k, in 2009 Harry Fearnley (then 2d) and during the years to 2011 mainly the study group of the three mentioned amateurs found new plays, researched their consequences, and developed the book's solution with occasional professional hints. Professionals started but amateurs, who have now invested some thousands of manhours, have taken the lead in the race towards a final solution.

While Redecker's manuscript Igo Hatsuyoron Problem 120 / The most difficult problem ever of 2009 had no binding, weak layout, worse language and hard to follow contents, the reviewed book makes great efforts in teaching the problem's structure, timing of moves, global relation of local status and decisions, history of the problem's research and a few fundamentals of approach liberties, regular and circular hane-sekis. While the first half of the book has sufficiently many variations, the second half's study of recent discoveries shows too few representative variations and points to webpages. Despite this unfortunate restriction by the publisher, the reader can follow what this problem is all about and where current research resides. Nevertheless, I expect having to read the book thrice to really understand all the contents, each play and its correct timing in each variation and the long term impact of some plays with peculiar timing. Whoever would want to join the study group must also read over 1,000 variants on webpages and ask for any most recent variants. The ordinary reader will be happy to get at least a good overview on the problem from the book.

So what happens in the problem? Imagine four difficult problems, one in each quarter of the board. Each is about tsumego, life and death and endgame and each has its spectacular aspects. For example, the hane-seki is not ordinary but has two additional groups and many global side effects for cutting problems, life and death and endgame in the other parts of the board. The exact position of each stone on the board matters and the interdependence of shapes and variants creates an extraordinarily complex whole board Black to play and possibly win problem. The various parts and aspects are so well integrated to each other that it is hard to believe in coincidence. Dosetsu's knowledge must at least have anticipated today's partial solution knowledge. Presumably he spent years on creating the problem. This makes it an artful masterpiece and celebration of the human mind. We play Go because we admire such great depth and skill.

Of course, nobody needs a book on just one problem and being not particularly suitable for rank improvement. One can also criticise one or another detail like a missing note in the legend whether captured stones count at the beginning or end of a diagram's variation. Such misses the point. The book, and especially for its price, is one of the first choices among the appreciation type of Go literature and furthermore evidence of the growing power of Western amateur research.

Are the results of their research available in SGF?

Thomas Redecker: The book's contents has grown over years, so there is no (one) SGF-file containing the entire current state of the three amateurs' research. The EPS-files, used for creating the diagrams in the book, have been taken (as an extract) from over 20 different SGF-files.