Most Difficult Problem Ever/ Discussion

f3etoiles This off-topic discussion was on the main page. I moved it here, but it can be moved again :-)

RobertJasiek : What is traditionally called a "most difficult problem" in literature is a tsumego problem.

f3etoiles Not necessarily so. In fact, the problem I reference is a whole board problem, with subject :"Black to play and win the game", and, in effect, it ends (after 172 moves) by some yose tesuji, and a win by 1 point, Japanese count.

RobertJasiek: Some tsumego problems are on the whole board. The position of that particular problem is artificial enough to call it a tsumego problem. Of course, more generally we might say: tsumego-like problems.

RobertJasiek : In my opinion, other kinds of go-related problems can be much more difficult.

f3etoiles Well, this is certainly your opinion. Is it not a little bit biased ?

RobertJasiek: Surely it is my opinion and biased. However, the objective aspects are the period during which the problem was unsolved, the time taken to solve it, to requirement to collect a usefully representative collection of problems, and the dynamic variation of all problems. Every problem's variations must be studied afresh for every new considered ruleset. Contrarily, typical tsumego problems are static, i.e. one needs to find their variations only once.

RobertJasiek : The most difficult, already solved problem was: "What is an explanation of professional Japanese go rules?" In other words: "Which ruleset fulfils some hundred of given or representative problems?" The solution took a decade of preliminary studies and 11 months of full-time work.

f3etoiles : I am certainly not sure you solved it. At best, you solved all the given problems. I don't know what pros would say about molasses ko, Nakayama was very surprised by my unstable seki (see StrangeSekis, diagram 2 (the second position)), and I don't know how they would have ruled it in 1949. Worst of all, J89 (which rules it indeed) is not enforced (I am not even sure pros know all about it) in important tournaments, as you certainly know (I refer to the infamous "capture while filling dames" incident)

RobertJasiek: I solved it: The Japanese 2003 Rules are (on their semi-formal level) logical. They explain all problems that Japanese professionals considered for their rules so that the outcomes of the problems agree to the professional judgement.

f3etoiles I am still not sure. It is so easy to make mistakes in this kind of analysis, when one is alone :-) (see,for instance, tje recent troubles of Hales with his proof of the Kepler conjecture) What do you think of this position, for instance ? 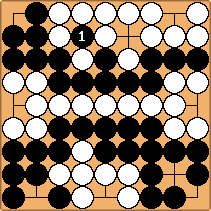 RobertJasiek: You seem to assume the following: During the alternating-sequence. Black has just played 1. White to play next. Then to answer your question "What happens now?", this depends on the players. The rules, whether typical professional Japanese or J2003, do not prescribe what the players would have to move. They prescribe which moves are legally available.

May I change your question? "What is perfect play?"

Modern professional Japanese rules tradition, J2003, and J1989 / Jasiek's tight rules text interpretation agree on the score, although they use different terms to assess it.

J2003 and modern professional Japanese rules tradition agree on the score, although they use different ways to assess it.

Needless to say, the modern professional Japanese rules tradition and J1989 contradict each other.

Robert Pauli: If an interpretation makes nonsense (not all white stones on the lower side being dead), one might consider it to be wrong . . .

J2003 and modern professional Japanese rules tradition agree on the score, although they use different ways to assess it.

Needless to say, the modern professional Japanese rules tradition and J1989 contradict each other.

This variation is interesting only for J1989 / Jasiek's tight rules text interpretation:

Quite likely, the players would agree to have a no-result if Black considers the score 0 to be unfavourable.

Of course, that J1989 / Jasiek's tight rules text interpretation disagrees with modern professional Japanese rules tradition and that the latter should be considered more correct from the view of Japanese professionals can be seen in Davies' topic of double ko seki and fake dead stones with 2+ liberties elsewhere on the board.

If you want me to go into rules details, then I will answer on rec.games.go since the user interface is much more convenient for me there.

RobertJasiek : Where that varied over time, the most recent professional judgement is explained. The professional collection of rules related positions has not been representative while my collection of such positions is by far the most representative one ever. - Of course, since there are about 3^361 / 100 positions, the problem cannot be solved in an extremely strict sense. Quite like the most difficult tsumego-like problem cannot be solved in a strict sense since there are even many more move-sequences than positions. If you criticise solutions of the Japanese rules problem, then you must also criticise solutions of difficult tsumego problems. - Solved it only for given problems: This is very wrong. I have studied more problems that were not considered by Japanese professionals in connection with their rules. A rough guess is that more than 60% were invented and had not been considered by Japanese professionals. - Molasses ko: The Japanese professionals were not aware of that. During the alternation, obviously the players CAN produce a no result. In the final-position, there was no opinion by the professionals. (If you want to nitpick, then you can criticise that I have not mentioned a tournament rule for no-result in J2003. It is a philosophy of J2003 to avoid tournament-like rules.) - J89 not enforced: How do you conclude that? And: Do you want to nitpick by discussing tournament rules and tournament-rules-like referee decisions (and their possible mistakes) while J2003 is a ruleset of rules of play? It is easy enough to enhance J2003 by tournament rules so that a variety of all likely possible referee decisions becomes a collection valid options, many of which would contradict each other intentionally (since referee decisions do).

RobertJasiek : The problem had been as old as the history of Japanese rules and Go Seigen had exclaimed: "It cannot be done!"

f3etoiles : And, as almost always, he was right. You, as often, confuse mathematical or logical considerations with psychological, historical and ethical ones. For instance, not one pro would accept your "solution". Even if you think this just proves they are stupid, doesn't it give you a hint that the general problem is not perfectly well solved ?

RobertJasiek: "He was right": Yes, in a sense that professionals can disagree and then for that there is not one, unequivocal ruleset. No, in a sense that hypothetical-strategy, choice, and life and death, can be described in J2003 so that the rules treat every position like Japanese tradition does. - What does your supposed "confusion" have to do with a possible acceptance by the pros? - It is unknown whether the Japanese professionals or which of them might accept J2003 (as a description of professional Japanese tradition, as far as rules of play are concerned). Since it is unknown, how can you predict the future? - Stupid: Stupidity is not the same as a missing ability to understand terms like "hypothetical-strategy". Many professionals have not had an education that would encourage such an ability. - A solution and a commentary on a solution are different things. Some would understand a commentary but not the solution for itself. E.g., a commentary can explain how hypothetical-strategy works in practice by using a reference to tactical reading in go problems.

f3etoiles And, of course, just to defend this page, I still think that Dosetsu problem is (for many reasons, not the less important being that it is real go) more interesting than mere questions about rules (and, yes, most difficult, for something which can be solved, or else the most difficult problem is, of course, the empty goban, the question being "Black to play and win by the largest margin")

RobertJasiek: Real go: There is no real go without rules. -

f3etoiles I rest my case. All I have to say is that, amongst reasonably strong go players (say above 5 kyu), 99,99 in 100 would find the problem on this page, the Dosetsu one, and even more artificial things like Dosaku sacrifice problem, much more interesting and go-related (not to mention more difficult) that your (mildly interesting) rules solution

RobertJasiek: What does majority opinion count in case of difficult problems? Is it an indication of the greatest difficulty that the majority is interested in and can cope with?

RobertJasiek: Interesting: Do you equate interesting and difficulty? - "mere question about rules": If it is so simple, then why was it unsolved for centuries?

Maybe for total lack of interest? It was only under international pressure that they had to write a formal rule at all (in fact, I still thinj the idea of rules by precedents has, even now, more appeal to them, this is why they don't usually know well J89, which, if you think about it, feels strange : what would we think of a chess master saying he never understood exactly the castling rule ?)

RJ: You should know better. Rules disputes were well remembered throughout the centuries. (Some so much that they became traditional culture.) A total lack of interest is something fundamentally different.

RobertJasiek: If it is about rules only, then why does it involve more than 100 considered go problems? - Indeed, there are many not answered, too difficult problems (like the empty board).