A rogue ko is a hyperactive ko which does not fall into any traditional category, such as approach ko or ten thousand year ko.

They are discussed in Computers and Games III, and defined in a footnote on p. 426. An example appears on pp. 77 - 78 of Mathematical Go by Berlekamp and David Wolfe. [1]

This example comes from Tsumego from games 20. Black will usually prefer to make a bent four shape in the corner rather than play the approach move outside (a), because it allows him to take the second ko first. Here Whites local ko threat (b) makes the approach move better, as a rule. 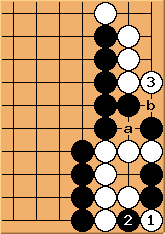 throws in to make a ko. White can play

to set up a local ko threat for the direct ko. 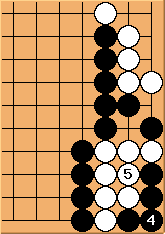 This is the usual continuation for this kind of throw-in ko in the corner.

makes the bent four shape and 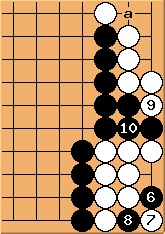 ) to make the direct ko. Now White can use the local threat at

to effectively take the ko first. (Note that Black may now have ko threats, starting at a.) 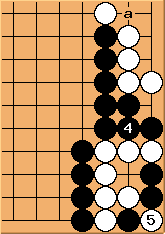 Because of Whites local threat, Blacks sacrifice does not give him the advantage of taking ko first in the second stage. Black gains more in the corner by eliminating Whites ko threat with this

, which is also an approach move. This saves 1 point locally, no matter who wins the ko.

Black should therefore only sacrifice at

when he can gain enough from the aji at a to compensate for both the 1 point loss in the corner and having to make the first threat.

(Patrick Traill: If the definition above is right:) This choice between playing it as a direct or an approach makes it a rogue ko.

Example 2: A move to raise the temperature

Black can atari at a (e.g. when ignoring a ko threat) to raise the temperature or win the ko by connecting at b.

When White is leading, however, her only worthwhile option (apart from answering a threat) is to connect the ko.

has answered and has ignored 3 threats (

Other options for both players are discussed in Bills paper[1].

[1] Patrick Traill: Before 2018-12-22, this page asserted that they are mentioned in Mathematical Go, but I could not find them in (my edition of) Mathematical Go Endgames; I did find them in Bill Spights paper Evaluating Kos in a Neutral Threat Environment: Preliminary Results in Computers and Games: Third International Conference. The discussion of rogue kos in that paper may be found at

Google Books  although Google Books does not provide page 425, page 426427 are perhaps all there is on the topic, again without an explicit definition. There he discusses examples 2 and 3 above and evaluates their counts under various assumptions.

edited this article (v 24 of 2019-09-28 21:44) to give the references. (I had overlooked the diagram in MGE, whose index omits them, and not realised that the footnote in Bills paper in C&G III was intended as a definition.)