This came up today in a game. White thought that the group in the corner is alive. Is this so? --unkx80 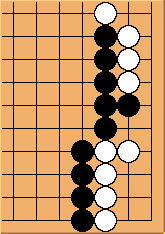 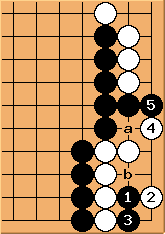 During the game, Black played

, a and b are miai, and White is killed by shortage of liberties. White resigned soon after that. 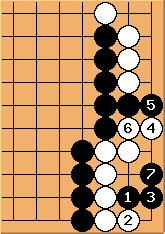 provides another path of resistance. However, up to the

, White is dead in bulky five. It does not matter if 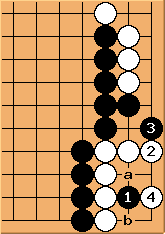 is the correct move which both players failed to see. To stop White from connecting underneath Black may play at

ensures life. After that, a and b are miai. 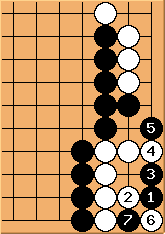 The real solution is actually the placement at

. The best sequence is from

, which results in a rogue ko.

exchange makes it a rectangular six in the corner with one outside liberty. In that case, the 1-2 point makes it ko. 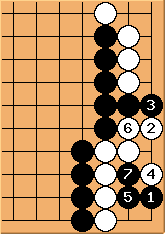 is yet another variation. Up to

, it is still a ko, but the ko is worse off for White compared to the previous diagram.

Because of the throw-in the ko is unusual, but this case has another quirk, thanks to the local ko threat to connect. I'll discuss this further at rogue Ko.

unkx80: Thanks. But shamefully, I was Black.