Go played with rules amended so that neither player can pass, and a player without a legal play loses (suicide usually being illegal).

Historically this was called nimgo by Bill Spight in the 1970s. (Also called Conway go by some, because there are no passes in combinatorial game theory.) Straight no pass go is rather different from regular go. However, there is a form of no pass go that is quite close to regular go, no pass go with prisoner return.

Nearly all forms of no pass go can be scored by territory scoring with a group tax. That is because no pass play typically continues until one player has to put one of his own groups into atari. Before that happens, the players can stop playing and count territory minus points required for life.

Black cannot take back, by superko.

topazg: 7 is a suicide move is it not, with 5 having been removed by 6?

captures the stone on the end, so it is not captured by

Does Black have to sacrifice at move 3?

It is worth noting that the above assumes positional superko. Under situational superko, the line does not work for black since white may play 8 in Game 2 (iii) at

below (as it is blacks turn to play)

Black can't play a because of superko, so must play

is allowed by situational superko, but after

black has no legal move

Apart from a different opening, what else can Black do?

Black wins, but what if

allowed? It is, after all a rotation of the position after

If its allowed, Black can't take it (standard ko), so black loses and it looks like 5x1 is a win for white since the black opening at

If it is not allowed, black has a winning strategy since white has no other move.

Jasonred : Hmmm.. so, how much area or territory or prisoners over the course of the game doesn't matter, just make you opponent not have a legal play left?

Bill: Research done mostly by the late John Rickard and myself suggests that moves are roughly proportional to territory. So on large boards the strategy should be much the same as regular go, but the endgame would be much longer.

Jasonred : Why? Territory doesn't matter anymore, as you can play in your opponent's territory without a care. all you need to do is get as many separate eyes as possible, making sure that you haveenough that on you have a minimum of two eyes on your opponent's turn. Also, it's going to be really cool endgame, cause decision of kill or do not kill come into play. 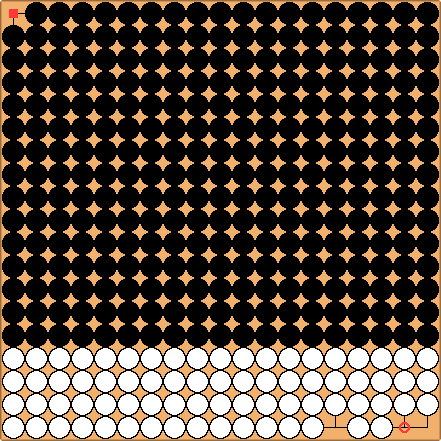 In this case, for example, don't ask how it reached that point, the correct play is at the circled point, the square there is just asking for havoc.

As far as I can tell, this is just close to the only possible endgame position, the others being one side having 3 eyes to one eye ratio, or a ko, or superko, or somewhat. But this would probably be like the most common.

Having 2 eyes isn't good enough anymore, you need more than your opponent.

all in all, a weird game. I wouldn't mind a game of 9x9 Do Not Pass Go though. Any takers?

RafaelCaetano: Jason, you ask us not to ask how did it reach that point. But still I wonder, how did Black manage to put so many stones on the board, if White cannot pass? It feels a bit strange. :-)

Aloril: During game black captured all extra white stones not currently visible on board ;-)

Robert Pauli: I disagree to Lasker-Maas rules having any relevance in equalizing no-pass go with stone scoring (and with what else?). It's not liberating prisoners, it's releasing them!

Bill: I fail to see the relevance of Lasker-Maas rules, too.

After White sacrifices 3 stones to shrink Black's big eye down to 1 point, she fills one of her 3 eyes. Under unamended no-pass rules, Black is now forced to fill one of his 2 eyes and eventually lose the game - ignoring the fact that he is leading by 3 stones on the board.

Allowing Black to liberate a black prisoner (after a balanced prisoner increase) and to fill his eye with that stone would serve him nothing. What he needs is the allowance to release a white prisoner (dropping it back into the supply) in exchange for not having to add a stone onto the board.

Bill: I am not familiar with the Yahoo rules, but I think that the rule stated simply introduces pass fights without turning the game into Nimgo.

Robert Pauli: If you feel that passing is best, just do so. However, I'll pass too and disagree to the end, bringing the burden to play back to where it was. Why care to pass at all?
I neither experienced it, and I don't know if passes lift the ko ban there, but it seems effectively to be no-pass go. At the end, one side will have no legal play and run out of time.

The amended version, which allows passing by returning a captured prisoner as a pass stone, has also been called "no pass go with prisoner return". This ruleset (in a version permitting some suicides) was published as "The Most Primitive Go Rule", T. Yoshikawa, Computer Go, 13: 6-7, 1989, though it could well have been discovered earlier. Scans of this newletter are available at

It's not just a question of how many eyes you have, but what sort. Consider the following two examples:

Some example positions, with their CGT values, are given here.

Chris Hayashida: I thought "No Pass Go" was asking you not to surpass Go-sensei. :)