Corner, side, and happiness[1] 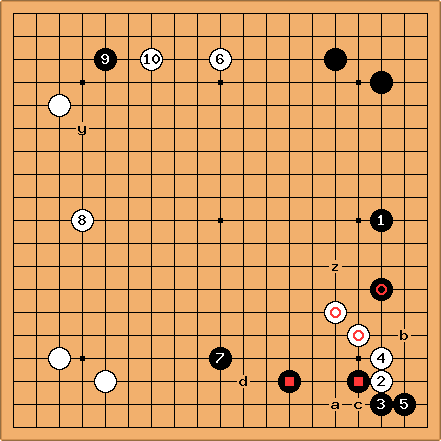 HolIgor: The game reached an interesting stage, at which Black should decide if giving White the upper left corner is a good idea. Or if taking that corner with small life is better. It is not clear also if Black agrees to tolerate White's move to the left of z. Personally I would give the upper left corner to White. But how? A simple jump to the center? Or maybe tsuke one point below 10? Or kata at y?

dnerra: White 20 -- we are not getting nervous about the lower right group, are we? :-)

MikeNoGo Black 19: The 3-5 point looks like a good place to start an invasion of the upper left.

: Well well well... I'll follow the proverb: "Big points before urgent ones"! (Oops.. or was it the other way round?!?)
Question: Couldn't White 16 have been better a line lower (on the hoshi)?

MikeNoGo : Despite your kind invitation, I decided to play an ogeima on the star point. I think it's a nice extension for the black group on the bottom and being on the fourth line gives a nice influence towards the center, for what it's worth.

Bill: Well, for one thing, it prevents a White extension at d, aiming at Black's weakness in the corner. :-)

JamesA: Black 15 looks essential to me; it makes the black group safe, takes the corner territory, and most importantly weakens the white group above. I think White is starting to get into a difficult position...

Bill: White 14 is perhaps premature, as it eliminates the possibility of the crosscut at c or the nidanbane at 15. However, it may be considered a probe to see Black's response. White was willing to throw her

stones away, if need be. In that case, the exchange of White 12 and 14 for Black 13 and 15 is no problem. After Black 15 Black has weaknesses between his

HolIgor: Black has a handful of suitable moves in the lower right corner. The question is, however, whether White would reply? Just to remind the players that the clock is ticking.

AvatarDJFlux White 14: At this point is there any other move? By the way, I've read in some joseki books that

is slack and not considered joseki: Black should have played

Bill: Without the extension of Black 11, joseki is for Black to answer White 12 with Black 14 and connect to the circled stone while sacrificing the left-most

TakeNGive: Having already chosen a sub-optimal move for Black, I won't do it; but my temptation is to put Black 15 at a since it looks like a juicy spot for White to cause trouble. But I don't like being so thoroughly in gote. Is b playable?

JamesA: I think Black should play at c, if he plays in this area (which I think he probably should...). 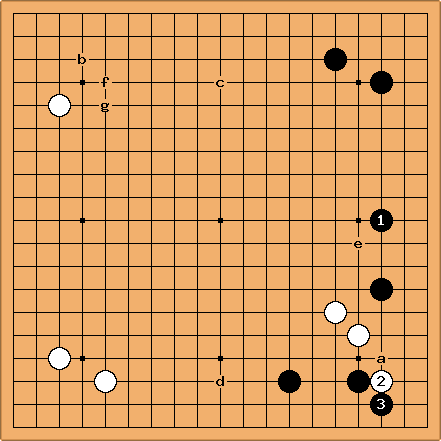 JamesA: I just wanted to know people's opinion on a question that arose earlier. If

had been played in the top left corner to prevent an enclosure, as I understood the dan players to be suggesting, would it be good for White to play around the middle star-point at the bottom, threatening to create a development in the bottom right similar to the diagram entitled 'better for White? Or should White play a move in the top left?

Bill: Your question is hard to answer in general terms. If

is a kakari in the top left corner, whether at the 3-3 point, 3-4 point, or elsewhere, White may or may not reply.

As a rule, the extension on a side is not as good as keeping Black separated in the bottom right corner. However, if Black does connect and White makes a wall, that wall would work well with the extension on the side. It's an interesting idea, a good example of whole board thinking.

Of course, you should expect that Black will not make that response. 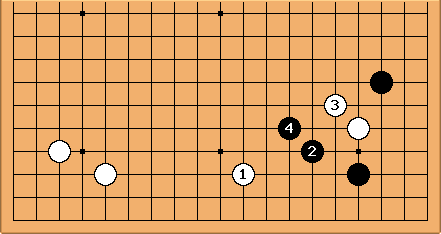 JamesA: Isn't Black 11 too easy on White? Black has already made a stable position on the lower side and I think a strong attack should be made on the two white stones. I think White can force with a and b (in diagram 'A') before playing in the top left to make a second enclosure. Won't this be fine for White?. I think Black should have played at c, White d, then at e to build a large framework whilst attacking. Thoughts from the dan players?

Besides, White still has f for easy sabaki.

Black 9 and 11 both give White some elbow room. 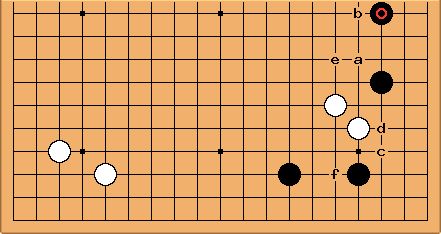 TakeNGive (10k): Black 11; considered a through d before choosing 11, which seems patient. There's still aji in the corner for White, but I think Black can profitably harass the two floating stones. (Maybe better at e?) 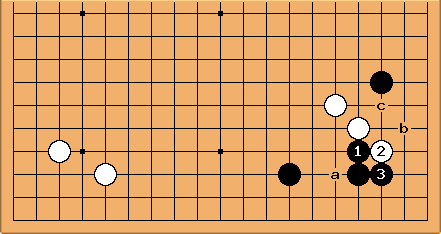 Bill: Supposing, mindful of the weakness at a if he plays at

, Black threatens to connect with

is a nice touch. Black can still connect, but has to do so at b.

Also, White later has the possibility of White c followed by White b, making light shape. 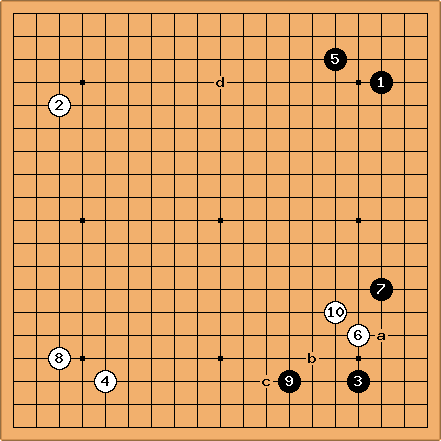 HolIgor: A funny situation develops in the lower left corner. It is very much like a known joseki, but White is one move behind schedule. It is known that at the moment White would like to play b. Will Black prevent this possibility playing there or at any point nearby? Or will Black take a big point elsewhere and allow White to return to the joseki pattern? The star point in the middle of the right side is a natural extension from the enclosure in the top corner and at the same time it supports

Bill: When would White like to play at b? After White 10? Which diagram? Do you mean the enclosure in the top left corner? How about White f or g?

: well, after having read Dave's extensive analysis it looks to me as if White has already a steep uphill game...

Nevertheless, I have a feeling that she has to add a stone in the lower right before doing something like d on the upper side (the other option I fancied for move 10)

: I don't think Black should attack the white stone too directly yet; I like steady moves like this. Or is it just a bad move? Any comments?

Bill: It's certainly not a bad move.

But Black has a local tally of two stones in the bottom right. Is Black's position there as good as an enclosure? No? Then how about preventing White's enclosure in the top left?

has limited prospects. Maybe another local play is better.

Bill: The book moves are a and b, right?

JamesA: If Black plays b here I was worried that c would become a good play for White later on. If Black a, can't White play this:

... leaving Black a bit too concentrated on the right side? What do people think?

here is too good a point for White to bear. If White does not answer, Black attacks the whole group with something like a. If White tries to hane at b, Black cuts immediately at

. I think that White has no choice but to submit with

after which Black moves out quickly with

. While it is true that Black is building from the right side, he is not over-concentrated there.

, Black has played two more moves than White on the lower right. If White next makes an enclosure in the upper left, each side will be two moves ahead in two corners and Black will have sente. I think the question is whether White is better off to have played in the lower right and then played tenuki rather than going directly for a double enclosure game game. Since White's position is still subject to attack around c I think that White's plan would not work well here. On the other hand, I also doubt that White stands better if she uses another play at the bottom and allows Black to play against the upper left first. Black will then have the opportunity to choose how best to develop the right side framework.

is too good for Black. Better play for White:

Now Black can play a wedge on the bottom side.

is a bit passive, so I think that

should not be played too early in the game.

(More can be said, here, but I do not want to influence the next few plays. If there are any. ;-))

: Should White regard the left side as miai and reply in the bottom right? Maybe, but I like this enclosure better than the other one. I'll rest content with having prevented a black double enclosure and threaten one of White's own.

I violated the instruction to play one move since I don't think that we have 200 contributors yet! Let's make it a true New Year's game.

: because this is what I usually play in this situation, and I want to see how the senseis handle it. I'm with the Blacks. Happy SL2 to all! --Stefan

HolIgor (a presenter): There was once a statement on rec.games.go that the side that builds two enclosures wins easily. The databases were searched and four games were found. In all four games the two enclosure side lost. So, the urgent question of the moment is whether White would allow Black to form a second enclosure. Other options for White are to form an enclosure of her own or to split the right side.