You may wish to check on Capacitance And Resistance and Wave Front Analysis for similar lines of thinking as to what I am getting at. 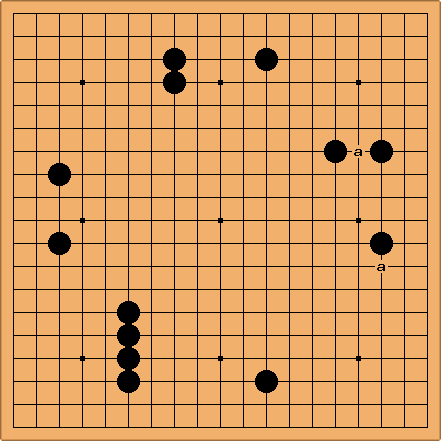 Left, top, right and bottom - all recognizable "shapes". In each instance, a stone is extended from a wall. Between the wall and the extension a sort of magnetic field is introduced. This field connects the stones in question. For example: 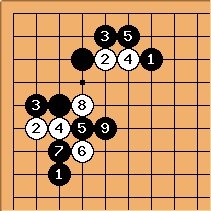 The sequences on the left and top here show that in a normal situation, the black stones which have a strong field between them are connected. 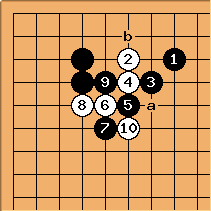 In this example sequence, it becomes obvious that the white stones inside are dead if that is what Black desires.

might not be desirable, but when Black connects at a I think the result is average. Possibly connection underneath is worth more. No one can predict the actual lines of play, but the important thing is to understand how the magnetic forces interact. Of course, Black could just play b first and ensure connection, but that loses sente. Better to capture and connect at a and lose sente anyways? 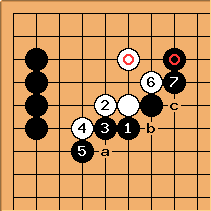 This kind of sequence shows how difficult it can be for White to break out. Black doesen't have a lot of worries here, in my opinion. The cutting points a, b and c do not require Black's immediate attention.

With this in mind, look at a move at a, b or c, or perhaps 1-5, *before* the marked white stone. A 'close' move like 6, 1 or c might provoke Black to make territory with the thickness. A far move like

might be interpreted as an invitation to extend on the left (a mistake for Black) at which point White can move at the marked stone - and win the fight - because White has offset Black's opponent's magnetic field (weakened it). 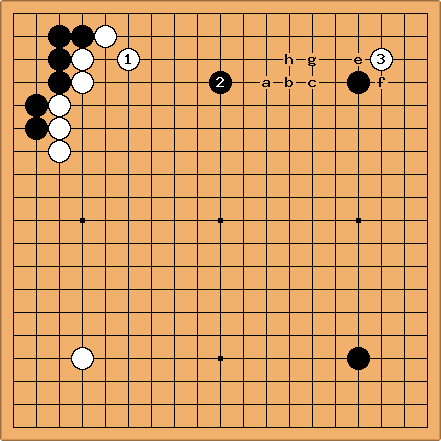 In normal play, White might have been accused of blocking in the wrong direction. Black can just move at

is too close to White's thickness and should be at g.

Bill: I agree with Dieter. Better at g or maybe h.

Bill: These ideas of how many spaces to extend from a wall are for walls that need them. I. e., walls without eye shape. That is not the case here. W b is too close to White's wall. Better W g.

Because there is a stone in the middle, perhaps a would be better, and the Black stone is under attack. However, so is the White stone at a. So a fight comes up, but the white wall is much stronger than the black one. So what if White moved at

now instead? Would it be better for Black to move at e or f? If it's the same sort of standard joseki as in the upper left, then e would let Black magnetically connect with 2. If f, then territory and thickness would be balanced, and Black would have a good shot at more territory (the right hand side) even though it's White's move. But look at C13 - as an example. I of course haven't read out an entire game's worth of fighting, but C13 (the white stone sticking out on the left) can, in theory, magnetically connect to the right hand side somewhere.

This is a sort of theory I have been working on, a sort of shortcut or trick to determine what moves are 'possible'. Locally, tesuji and life and death knowledge become important, but for starting whole board fights, see how powerful the "magnetic" influences are. 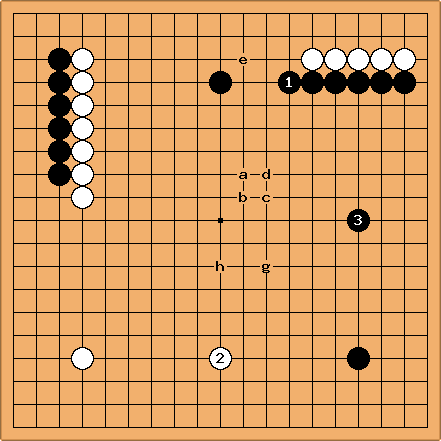 Black now takes 4 at a through d. Dieter: It's White's turn, no? Why 4? Well anyone could have come up with that move I guess, if it was just good old K10. But here 4 aims at invading the right and also a move maybe at e or so. I'm not sure which one looks best of the 4 to you, I seem to favour c.

How about somewhere around g? The aimed at invasion then is between 3 and the bottom right. With h the moyo is stronger and the invasion as with g is possible, maybe.

Black is probably then thinking to reduce White's area, but probably is not thinking how C13 affects a move all the way on the right side. So when Black picks the reduction move, Black is only thinking in 3 dimensoins, not 4, and will be lucky to get a move that fixes all the "intended" problems White a through d above will set up.

You see, you play this move not really to set up a moyo. You're going to lose your moyo. The key is that the stone which sets it up is connected to something magnetically, and you can either get the moyo (which you don't want) or a lot of invasion or reduction lines in sente (which you do want).

So what would end up happening if both players thought this way?

Probably a move or two in the corners and then a big fight starting in the center of the board. Something like that. I've seen games like that, pro games, with move 12 at M10 and 13 at L12 - completely crazy stuff. But perhaps this magnetic fields idea (similar to the capacitance and resistance in a way) is a way to simulate pro's thinking without massive reading - at least in situations where the magnetic field is clearly stronger (a wall 1 or 2 stones stronger). In a situation where the walls are of equal size, it becomes difficult to judge who will win when the walls get too long. Thats where real reading (and pro strength) comes in. So just extend your wall if by doing so you can lose your thickness and gain some territory. If your opponent moves a lone stone in front of your wall, it's almost like your opponent lost a ko threat, perhaps.

If you can understand what I am saying, it will open your mind to whole board thinking, perhaps in a way you never thought possible.

I think that this could only in theory make you a stone stronger than you already are, since the possibilities this idea opens up are based on what you already know to be possible.

In recent play I haven't done so well as in the example game provided below. So don't try to force this idea on your opponent. It's best not to move too fast. Remember, a magnetic play is a possible play, not a hamete (a trick play). If it's not a good play, then it's still not something you should make. It's just something to help you learn to think whole-board more.