Hello and welcome, this series is probably best for IGS 13k-2d or so. But the examples are at a 3k-2k level. But since you can never think enough whole board, I hope that stronger players will be re-inspired by my devotion to whole board thinking. -Kungfu 3k*

No, I am not claiming to have devised some devious new joseki known as the magnetic joseki ;) Rather I am merely claiming that using my MagneticStonesIdea or a revision of it, you can come up with (almost) the perfect joseki move without reading all of the 50-150 lines of play that might be needed if you want to invest in a new joseki.

"A meijin needs no joseki" (unknown)

Please review one of Haengma, MagneticStonesIdea or MagneticHaengma to get an idea of what I am talking about here. 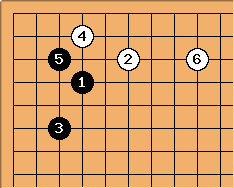 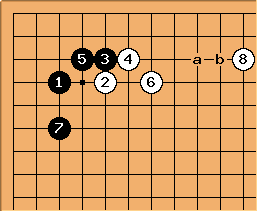 These are pretty much standard sequences and are sometimes even seen in professional level play.

If you imagine these sequences taking place in the middle of the board, then you will see that the players don't make any territory at all. So consider the influence extending out from the groups. Using this method of analysis, we discover that white's position in the komoku example can't be close to optimal, since his stones are far less connected than black's. The fact that black got the corner must be worth more than white's side territory; besides, black has sente. How on earth could this be considered a joseki in any sense of the word? Well, white has a a strong influence field towards the upper left center. In theory, this is compensation. But only if you play whole-board.

So this gave me an idea, that the edges of the board reflect magnetic field strength of the stones. That's the only way white could get an even result in amateur play.

Then I felt that there is then a definable (although to me, unknown) point where the field strength indicates settled territory. I have heard that similar methods like matrices are used in Computer Go already, as influence functions.

If you have a nobi connection towards the center, you can extend three spaces from it along the edge; Again, the connection between them is reflected off the bottom and it is "secure" territory.

In a similar way, if you have a large moyo, you can now analyze the field strength based on your (now new?) knowledge of haengma and the influence field strength. 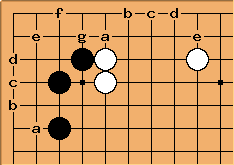 Here, from a to f and a to e indicate a sort of distance for the field strength to be reflected.In the corner it's a longer way but it's also a stronger reflection there, or might appear to be. Think of the inverse square law. Now look at the above. If the edge reflects an influence field, how well does it do so?

If you have something like a large knight's move, if it is cut, is it's field strength along the edge large enough for you to capture the cutting stone?

Again, this is just a prop for me to start thinking whole-board. That joseki has been analyzed to death I suppose, so I am not really adding anything new. What I hope though is that in a new and different situation, you can use your newfound knowledge of haengma and how it can be weakened to get an optimal result. 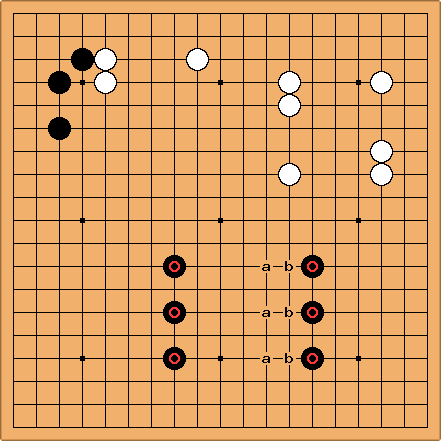 Consider the groups in the center. The marked black stones are too far apart. I'm not sure if they should be at a or b for the space between them to be "secured" territory.

So, go all the way back to the hoshi example. Note black 3. If it was made as an "equal and opposite" move, it would be too close to the edge. Therefore, a knights move was made. Also, white 4 in the hoshi example normally could be cut, but again the connection has been strengthened by the reflective property of the edge into an un-cuttable connection.

Now then, we've talked about corners, now the edge. I'd like to just toss this in quickly: that you need to keep a balance between 3rd and 4th line stones. Obvious, but now maybe you see a reason for it, balancing the magnetic strengths. You need some 3rd line stones to form a field strength against the edge strong enough to be secure territory, but you must also keep balance against the center influence fields so that your 3rd line stones are not weakened to the point of allowing an invasion.

All of this indicates a certain "probable" way to play joseki. Joseki itself means a sort of balance, if I am correct. Balance in the sense that it is a "fair" exchange.

So then, it is not joseki for either player to enclose or be enclosed, unless at least one of you has read out the position across the board.

In my opinion, then, the best way to start to understand these ideas is by playing (as an experiment) only what I call "balance josekis". I.E. the hoshi and komoku described far above.

- Defender usually makes an equal and opposite extension UNLESS there is a stone on the side, then make an equal extension but (perhaps) one line higher or lower as appropos.

- Do not take too much corner or side than your opponent and then attempt to call it joseki (i.e. do not get enclosed and do not enclose - merely split the corner and balance extensions).

- Balance between 3rd and 4th line stones when extending on side

If you play like this, then it will force you to think whole board. You will come to a point where there are no more territory moves left in joseki. Then hopefully you will look up and see the sky, and you will realize that if only you made one little joseki move differently you could have made a huge moyo, or prevented your opponent from making one...

Point being, that if you had followed the ideas I present here and studied haengma, you probably would have made a different move to preserve the whole board balance. This will probably take you up 2-3 stones in strength if you have enough time to think about it and don't move fast. Perhaps, you only lose those 2 stones when studying joseki because you aren't thinking whole board anymore? Well, YOU be the antiderivatve to your opponent. YOU think whole board - while studying joseki - and make HIM lose 2 stones in strength!

Fuseki is, in essence, whole board joseki. A study of fuseki can also lead to this kind of idea, but you end up studying the "josekis for fuseki x" and then what you are really doing is studying josekis from a whole board perspective anyways.

The ultimate conclusion is that territory is the end, and not the means, I suppose. A careful balance must be struck between territory and influence at all times. Seek out your opponent's slack moves, and your own.