This page elaborates on MagneticStonesIdea by providing some examples based on haengma. Please review haengma, it's interesting :)

You might want to check out the next in this series which seems to be explaining my stepping stones into shodan. MagneticJoseki

I have come to the conclusion that my idea is basically all about haengma. A study of haengma would then form the basis of everything in my "magnetic" series. As such, I suppose my idea is interesting to a point, but I concede that a study of haengma will probably work better for most people than what I say here.

I suppose, that this is how haengma was first organized. By people starting to think like this, gradually increasing in strength by playing more and more games. I am only 3k* on IGS, so I suppose this idea of mine is merely a stepping stone to the study of haengma.

This example (the iron pillar) could be an example of nobi in play.

The magnetic connection between nobi is immense. It cannot be separated. However, the addition of field strength from nobi is small. If the two black moves were interposed, the effect of

on the center is much larger than the effect on the right hand side.

may or may not have an effect on corner approach moves on the top left or bottom left, depending on the strength of the white stones. However, it does weaken any connections that the white stones have.

is an example of kosumi. The kosumi connection is almost as strong as nobi. The field strength is the same. Conclusion is that kosumi is generally not as good as nobi (I believe there is a proverb that speaks about this - weak players play diagonally, strong players in a straight line). Also it is said that running with kosumi is generally not a good idea. However, that being said, kosumi is a basically strong connection.

A one-space connection, the one-point jump is strong but not as strong as nobi. It can be cut (see linked page).

In the above example,

has magnetically strengthened the one-point jump so that it cannot be cut.

White can't cut because of

In a similar fashion, a one-point jump from a two-point jump strengthens the two-space jump so that it can't be cut.

White can't cut because of

In a similar fashion, the theory is that a move by the opposite player at

weakens the connection, so that the stones can be unconditionally cut. That is, that the cutting party does not suffer any loss and the cut is 100% sente (and should end in sente) because of the weakening stone actually being a sente move which cuts the stones.

This sets up all sorts of dual-purpose moves where you extend from a strong position (in gote) but the move actually has hidden sente potential much earlier than you think.

Based on this hidden sente potential, you may be able to pull off moves you didn't think possible. You may be able to start a fight that even if you lose allows you to take a much bigger chunk than you were going to get from the fight. There may actually be situations where either way you should win the game. In such a case, the player doesen't understand the connection between the stones.

So with this quick review, it seems that the magnetic stones idea is merely a way of looking at whole board fighting based on haengma across the board. 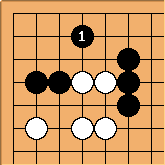 "Keima is also a tesuji for connecting two groups." -GoranSiska

Goran's example is in the corner. But if a similar position appears elsewhere, based on the fact that it can be cut, interesting things can happen. 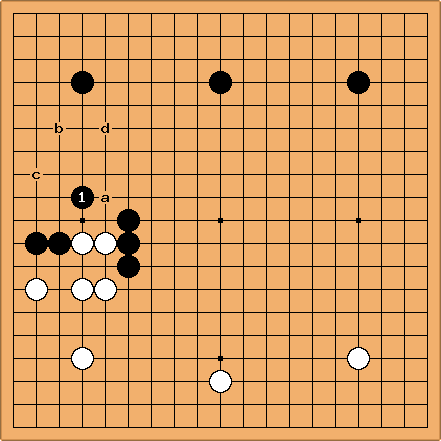 Because the white stone at a lives after the cut, a ladder breaker on the top might be interesting. A left shoulder hit on the top center black stone, or perhaps a 3-3 invasion on the upper left as a probe first. Something like b may also be possible, aiming at exploiting Black's aji in the position. The discussed moves may or may not be viable depending on the magnetic forces in the area. 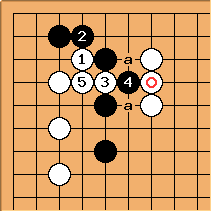 Something like this is possible because the connection between the one-point jumps are made very weak by the stronger white connection nearby. I am a little frustrated by my inability to express this particular idea in the way it should be expressed. The opportunity (or the opportunity to threaten) to make the kind of cut I am describing comes up reasonably often. But it's not obvious to players of certain strength. So, what other kinds of threats are not obvious to you? Something across the board? That's what thinking this way is supposed to make obvious.

I do not think it is realistic for White to expect to get any territory on the left, at least not anything closely matching what Black got with his last two moves.

Above, White is trying to use

to lay waste to Black's claim on the right. This might not be the best line of play for either side, but the idea is not to hold too much on one or two moves: try to seek out the weak spot which exists in the magnetic field's connections.

Other things to watch for:

As you look at pro or high level dan games, watch how one player will make a simple extension and the other will make another simple-looking move. And then look deeper. at the responses. Do the responses balance the magnetic field strengths across the board? Yes, they do. It becomes obvious that, sure, they are making fuseki or joseki or territory grabbing, but they are doing it in such a way as to subtly poke into the other's magnetic field and weaken the opponent's connections. A simple joseki move which extends right from the bottom left might prompt an approach move from the top on the right aiming at something in between, or perhaps just an extension on the top left. Anyway, I hope I have given you some interesting insight which you will now explore. Happy living!

Bill: The principle that you cannot ignore the surroundings is sound. However: 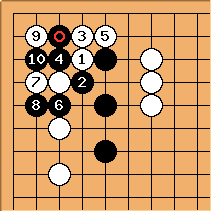 is tesuji to connect to

Black has connected and ruined White's corner. If