Purpose of this page

A proverb says, "Even a moron connects against a peep."

Simply knowing the proverb is not enough. It is over-simplication. It doesn't cover the whole picture of Go well. A further explanation of it can make people understand what they should do when they face a peep.

In this page we are going to discuss:

Am I really a moron if I don't connect against the peep? [2]

The proverb itself strongly suggest people connecting against a peep. However don't be misled by the phrase of "Even a moron...". Don't get it wrong that it is, say, 99% correct of all cases.

No, you are not a moron if you don't connect. In pro games, you will see many more different responses. It is not uncommon to answer differently. Now let's see the other choices.

Alternative responses against a peep

You can see, everywhere can be an option for the peep! Wow! Marvelous!

Playing elsewhere is an option too. Later W will respond to any of the options suggested above.

It is from a database with roughly 30,000 pro games. At least one player is pro in the game:

Symbols:
B = Black
W = White
Ba = Black plays at a
Wb = White plays at b (later) when B disregarded W's peep and played elsewhere.

NOTE Ba, where black connects, is the "suggested" move.

Alex Weldon: Yeah, but most of these other answers (depending on the situation) are also forms of connection. So perhaps the proverb should be "Even a moron connects against a peep, but a strong player connects in the most efficient way." :)

aLegendWai: Yes, you are right. A more soundly proverb you have ever made. Bravo!
The proverb itself is a bit vague. It gives me the feeling the connection here means a solid connection (the diagram should be darned. It misled me ^-^).
By the way, bear in mind that some plays don't really connect both stones (even indirectly), both groups are indeed separate for some variations.
If the connection means so broadly, I doubt it can apply to nearly most situations, not only a peep.
"Even a moron should connect when someone threatens to cut, but a strong player know how to connect in the most efficient way." :)

Andy: The peep is an attempt to force. It is natural for a pro to resist when possible.

Slarty: So, even a pro connects against the peep well over 60% of the time, and that's against non-moronic peeps.

When should I connect against the peep

aLegendWai:
Now you realise the other possible responses of a peep. Next I'll try to tell you when we should connect against a peep.

It is better for us to connect against a peep provided that:

What weakness you may see if you don't connect

is played, 2 weaknesses occur. If they are serious to you, you should connect against a peep in the first place.

Similar weaknesses may occur even if

responds in other ways (instead of playing elsewhere. See the following diagram

When should I NOT connect against the peep?

TDerz: When it makes you heavy and your connected group is much more liable to an attack. I.e. the connection does not add safety/stability/eye-space, rather loses a move to escape.

I miss the time right now to edit here a proper example diagram (e.g. a jump from the 3rd line to the 5th line is peeped while surrounded, resp. next to the opponent's stones in 1ken distance in his sphere of influence) , but the b here is often used for that purpose. White may cut at a then and is squeezed after Black f - W cuts at c, Black's squeeze i.

Playing at i as reply occurs often too - for the same reasons. cf. Forcing Move Misunderstandings 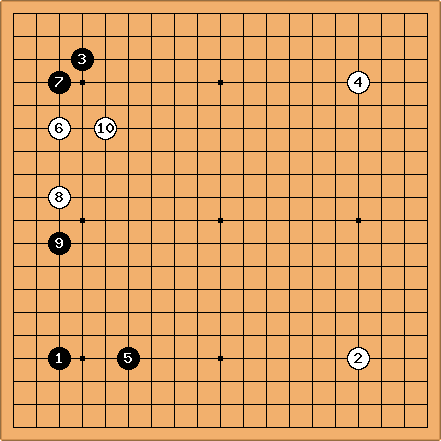 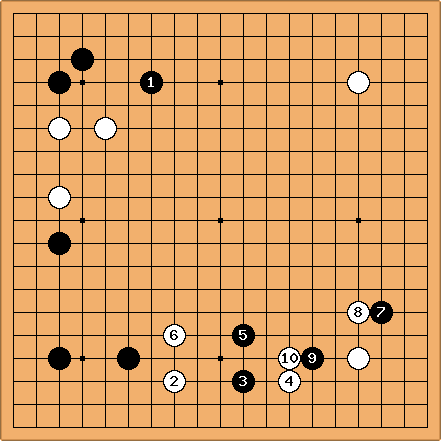 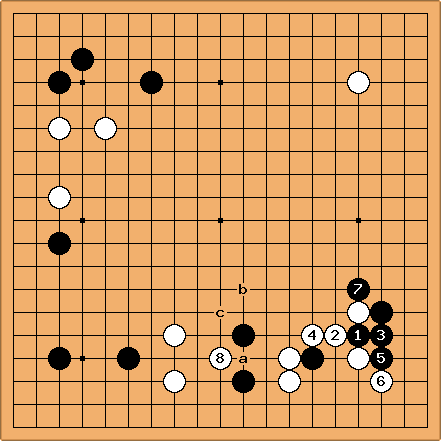 Here comes the pivotal question: Should black connect at a?[3] It makes Black heavy and (almost) commits himself later to save all stones against attack like b or c. I write "almost" because Black decided somewhat later to sacrifice these stones anyway after the white attack c. 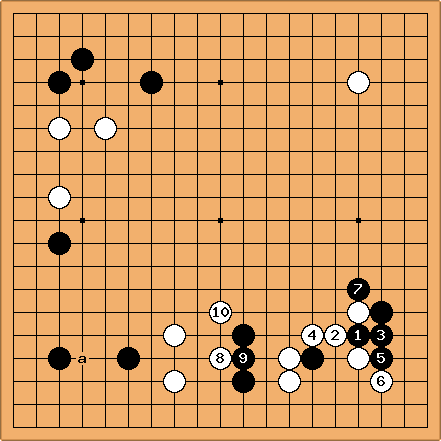 Black choses to connect: White 30 (at

) is too early, white should first create aji around a. 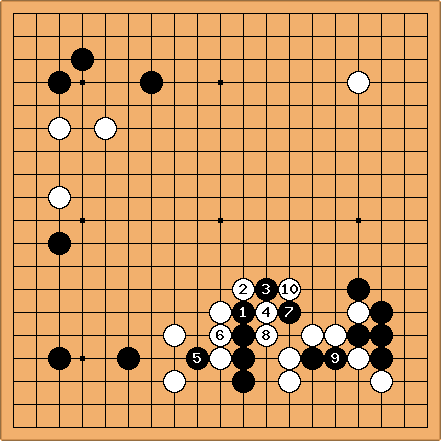 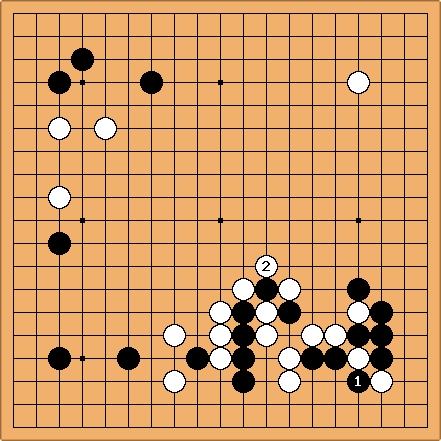 In spite the exchange with the corner this result is good for White (commentary Geert Groenen [4]). Black did not play extension with

), because White then connects at 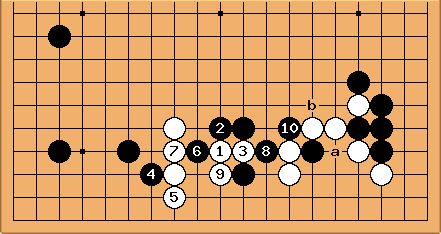 Then, how could/should have Black played?

Bill: In the above diagram, wouldn't

there, too, for that matter.) 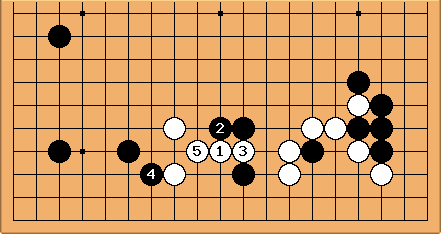 Oryx To my untutored eyes, B really doesn't have much left to say in the lower right after

. Best at this point to shore up things elsewhere, I think.

was shown in the magazine (not played) for optimalization of the squeeze and/or teaching reasons. If, however, it does not work, one should refrain from playing it. Simply

(cf. dia. below) is better here. I should forward this to the magazine and or Geert[4]. 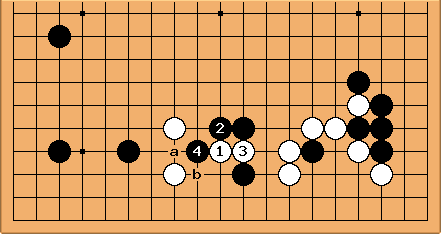 Oryx Now, this is interesting, if only in terms of the point of this page.

threatens a peep; is W a moron for not connecting against it? 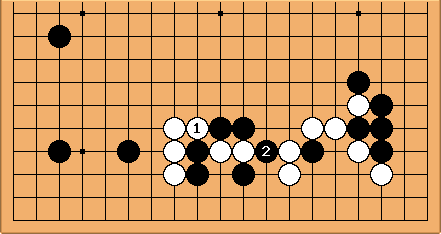