Remove double threats before you first capture the ko

As preparation for making first capture in a ko fight, one ought to remove the double threats by playing out each of these situations.

The logic is this: if you leave any double threats on the board when you first capture in the ko, your opponent can immediately play all of them as one 'long ko threat', and then retake in the ko. This has an unfavourable effect on your stock of ko threats, equivalent to losing one threat (for nothing at all).

That is, suppose before the ko fight starts there are identifiable double threat pairs at P, Q, and so on. Then before Black first captures in the ko, he ought to play out the whole sequence

This theoretical idea is important for any algorithmic approach to ko fights, and for any serious discussion of preparation ahead of ko fights. It should of course be qualified in some ways:

The points here are that what matters most is that one shouldn't give the opponent a large, good threat for nothing; and that ko fights are supposed to be a source of profit, so that loss-making threats are rigorously avoided (and welcomed if the opponent plays them). 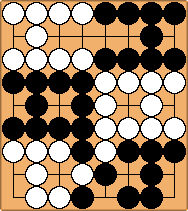 Robert Pauli:
If White goes wrong, she loses by one.
Done? Remove the top row completely and try again!