Kitani Minoru's career divides into several stages, as far as style goes. After about 1940 he played in a very territorial way.

As part of that style, which involves a need for difficult fighting in the middle game, he produced a number of innovations. Some were incorporated into the main stream, while others remained effectively his 'personal joseki'.

Therefore to say that some variation is a Kitani joseki implies mostly that Kitani played it in games - he remained a top player in the 1950s, despite poor health and the general feeling that he hadn't fulfilled his potential, considering talent alone.

It seems that the 1960s saw the popularisation of joseki dictionaries (boiled-down versions of the Igo Daijiten), posing the compilers problems of definition of what was joseki. Since individual players (Kajiwara was another) played lines not generally accepted, that was one problem. Go Seigen and Hashimoto Utaro innovated freely. Sakata favoured certain lines in order to get a middle game that suited his problem-solving style based on accurate reading.

In that context, isolating 'Kitani joseki' was a way to pay respect to the moves, without claiming that they had the force of professional consensus behind them.

Go Seigen, Kitani, Hashimoto, and Sakata, in this respect, exemplify the saying that there are no joseki for a meijin. 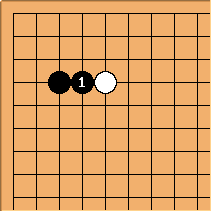 This is a simple example. Apart from Chen Zude, other pros hardly use Black 1 here. 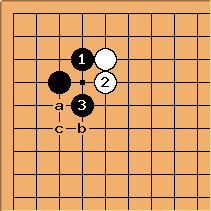 This joseki is also attributed to Kitani. Note that Black must play

(or b or c), otherwise White has a severe continuation at a.

Bill: Kitani only claimed the variation with

at c, in his book about the New Fuseki and Kitani joseki (Watashi no Go, vol. 2).

NickSamizdat: A survey of 1033 Kitani games shows that - as opposed to the 3-4 point high approach, thrust joseki, above - Kitani usually lost with this variation unless he was playing black without komi. He had more success when he started with the Shusaku Kosumi of

and later followed-up with the kick of

Question: how would the continuation from White a proceed? b looks more natural to white for me, not sure how I would play after White a. 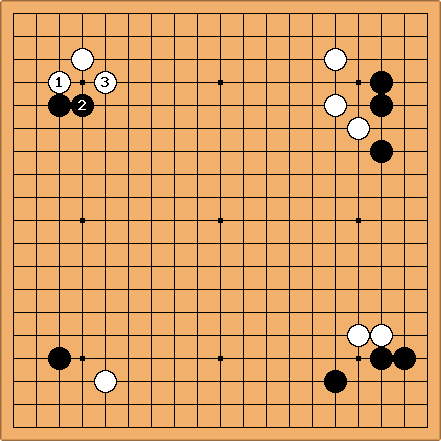 A possible reason for this sequence to be ascribed to Kitani, is its occurrence in the Kamakura jubango. Yet there are various 19th century games that include this variation. Shusaku, Shuho, and Shusai had all played it before Kitani. 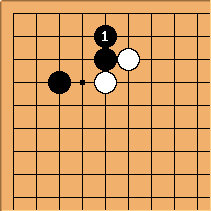 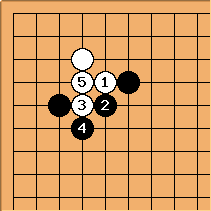 was invented by Kitani as one of the ways to avoid the taisha. See Taisha kosumi-tsuke, hanekomi for discussion.

Hyperpape: Sometimes pros want to avoid a joseki because they find it distasteful. Is the current wording better? 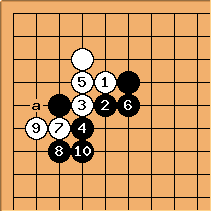 It says that this way of playing, solely devoted to making a territorial profit, was originated by Kitani. Emphasis mine. :) 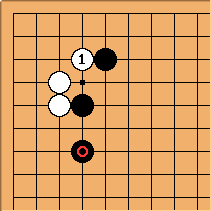 was played by Kitani in 1949. It has since been tried more than once by Kobayashi Koichi, and by Yamada Kimio. No standard continuation has emerged.

Bill: Another variation that does not appear in Kitani's book.