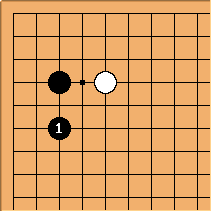 This is a Kitani joseki from the 1940s - though not exclusive to him. Black aims to make 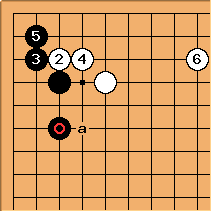 is standard. In this case

leaves no weakness behind (compare with the case of 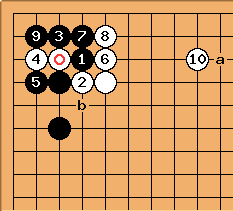 inside, as here. In this main line, played in 2001 in a number of pro games, Black takes a larger corner but White is thicker.

Dieter: AI thinks this is very favorable for Black. It prefers the so called trick play variation for White

normally be at a? I found four pro games with this variation; two out of four had

at a. How would one choose?

Bill: The principle does not count the stone on the second line. The principle is based upon whether an unsupported invasion can escape or live. So the usual extension is to

. (With an extension to a I think that an unsupported invasion can live in gote, at the expense of a huge thickness for White.)

antic: Okay, but what if black plays like this? I played a in a game and got a very unsatisfactory result.

Bill: White would hate it if Black played atari at

looks like a good play. It's a double attack, threatening

Bob McGuigan: The shape in this diagram is crosscut-like and in such a situation it is always useful to ask which of your crosscut stones needs the most help. It seems the white stone on the 3-3 point needs help, so extend its liberties, as

Bill: Although the early play is different, in Kono Te Goyoshin (Watch out for these plays), 4-4 vol., Go Seigen shows this diagram and says that it is good for White. White aims at a or b.

Bill: It may be best to atari with

first to get Black to invest a stone with

something has to give.

Question on the variations resulting when black plays 5 as another hane in the last sequence: BQM186