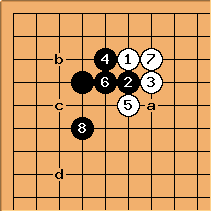 So I've been studying joseki, and I've run into a problem: I don't understand what's wrong with this joseki for black (or the joseki resulting from

at a). Back when 38 Basic Joseki was written, Davies noted that "Black's tactics in this joseki may lack the light touch, but they defend the corner strongly and are often used by professional players." However, this joseki seems to have fallen out of favor since then[2].

At first I thought that this was because white plays differently now (since it seems to me that this result favors black), but further study revealed that this was not the case. Without a ladder white cannot wedge with

at b is considered thin. Instead it seems that the attachment at

is no longer common. A number of sources refer to this as a Kitani Joseki, indicating that it contains reasonable moves favored by Kitani Minoru but is otherwise not highly regarded.

So I set out to find out what is wrong with this joseki for black. It seems to me that black gets an enormous corner and reasonable influence down the left side. There are weaknesses at b, c, and d, but of these only d is really playable without preparation, and at that black seems solid enough to support a pincer, making this seem dubious. White has influence along the top, but since it seems that with the ladder black has more control in this joseki, black will be able to choose another joseki if this influence is favorably situated for white. Even this thickness is not a very large wall, and the cut at a (or

if white connects at a) decreses this value. White can get sente, but without a preexisting strong position along the top, white should probably play an extension along the top, so even this seems to favor black. 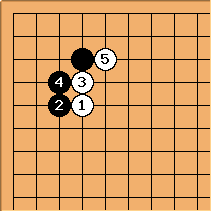 seems vulgar because it attaches to a weak stone, and the

exchange clearly favors white (still in the diagram above). Black's shape does seem overconcentrated (there's an empty triangle in there) but we can learn from the avalanche joseki that a good end result justifies some vulgar-looking plays and a bad shape in the intermediary moves.

The only thing I can think of is that there is some devastating followup in the corner for white, but all the variations I read out seem to favor black. So my question is, what is wrong with this joseki? Is there something I'm missing?

Korlon: I'm certainly not any sort of expert, but I'll just give my opinion. The 4-4 stone is typically used more for the influence, not the corner. This joseki allows white to settle quite easily and gives white an adequate amount of influence as well while black doesn't seem to have that great of a continuation into the center as white would. So the Tsuke-Nobi joseki may just be put in disfavor due to contradiction of ideas. 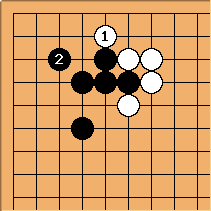 Chris Hayashida: Not to nit pick, but the shown joseki is the tsuke-osae (attach-and-block) joseki. One thing about this joseki is that Black's corner isn't as big as it looks. Later, when White hanes with 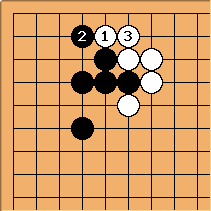 Chris Hayashida: I thought this would have been on the tsuke-osae joseki page. If Black blocks

, there is aji in the corner after White connects with 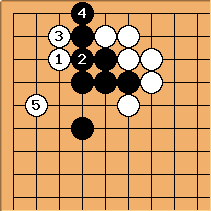 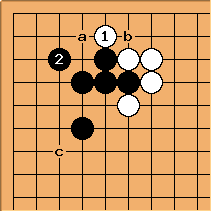 unkx80: I don't see why you should play at

rather than Black a? Later, if White b, then perhaps Black can consider playing at c.

Chris Hayashida: (I took the liberty of changing one of the bs in the above diagram to a c.) I seem to remember that a made

at b sente, in a manner of speaking, but

would lessen the value of the play here. Looking at this diagram, though, I can't picture White playing his next move at b. A move at a seems like a more likely followup move, if not something fancier like a monkey jump. 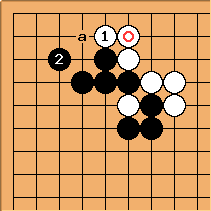 unkx80: You might have confused it with this joseki. With the

is usually recommended over a for the reason you stated.

Chris Hayashida: This is what I get for posting without going back and double-checking my references. It's possible that you are right, and I have confused the two joseki. I'll post again when I can find the position I am thinking of. Odd, but the tsuke-osae isn't in Kogo's Joseki Dictionary. 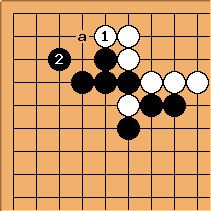 Chris Hayashida: I finally came across the right diagram. As unkx80 suspected, I remembered the diagram wrong. This is from Making Good Shape by Rob van Zeijst and Richard Bozulich, p. 44.

[2] Bob McGuigan: Kobayashi Koichi used to play the tsuke-osae joseki a lot twenty years ago or so when he was in his prime. His use of it was criticized harshly by Takemiya. It might be instructive to look in Go World at the commented games of Kobayashi from that period.