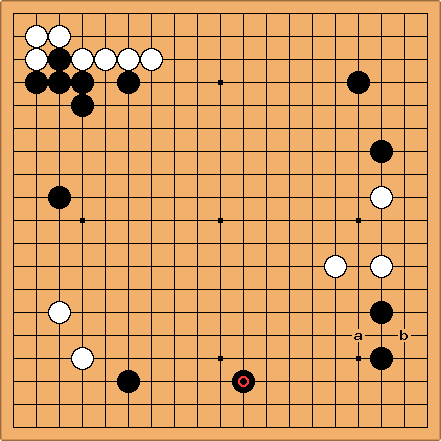 HolIgor: What happens next is very instructive at least at my level. I would be lost at this situation. I don't know if the stronger players could pin the correct plan here either. Black invites an invasion in the lower part of the board. White cannot allow the lower part to solidify and turn out into black's territory.

Invade? But where? To the left or to the right of the marked black stone? There is no space to get a base in both cases. Would a shoulder hit be sufficient?

Rich: To my kyu-player eyes, it seems that probing at 'a' would be very useful in determining how and where to invade. I think that's where I'd play.

Now, with black, supposing white lost a move somewhere else. How can black protect, fix the holes? It is not that easy either.

John F. Why use charged words such as 'invade'? Think nerai and your horizons will broaden.

DJ: Another comment on Rich's proposal: playing at a may as well be a probe, or kikashi, but I believe one's should be very careful in playing such a move: you should weigh the information you get from playing there (if any) against all the possibilities you erase, as for instance: a nozoki at b could be more useful later... In this sense your "probe" could turn out to be very aji-keshi.
Other moves can be more interesting, as John F. has taught us above.

Rich: Both good points, of course; I'd subconsciously taken the 'invade' of the page title and gone straight to that. Looking at the board, I don't know that I would invade at all. I shall refrain from further comment and assume that, if a pro decides to invade, his choice and his procedures will be better than anything I choose :)
Question for DJ - judging the kikashi vs. aji keshi value of a move is difficult at best, and the weakness should be made use of at some time - I take it you feel that white should refrain? Any guidelines for a lower-kyu player as to why?

HolIgor: I think that we should not refrain from any comments. We have to try to understand why a certain move was played. Each on their own level.

I think this is not the place where a correct move (connection) in Kageyama's sense is really correct. It is difficult to cut off black's stone while black closes territory on the fourth line.

I know what Yu Ch'ang-hyeok played but I am going to look in the GoBase for the other plans, like for example a in diagram. I am interested in what black had in mind to mend the holes in this case.

Rich: When I made the suggestion I was thinking that for a black response at 2 I'd treat 1 as kikashi and play the shoulder hit at 'b' to keep black low (or put pressure on the lower right, depending on response). Then work on building centre thickness. Nothing like as deep as the game below.

he says, "Thank you". Suppose that Black had

and either of the

stones. Would you then play

strengthens Black but does hardly anything for White.

Rich:Ahh, right. Thanks for that explanation, it might just be just what I'm looking for!

Interesting that black had sente more often than white [1]. So, first of all I am going to answer my question about the black's strengthening in this position. There are two approaches

Black cannot patch everything, so considering the right corner rather secure, black solidifies the left group and leaves the space between groups for white's erasure (which is likely to ge gote anyway).

In the case when white has sente an invasion in the left hole is also possible. I liked it more than the move in the game and I still like it more after searching in the GoBase.

I think that white does quite well here. [1]

Dave The reason that Black has sente more often is that White plays ni-ren-sei against Black more often than not and Black does note rush to approach the hoshi stone in the upper left. As a result, usually when Black pushes White from above and then makes the 1-space extention from the komoku stone in the bottom right, he expects to have sente for the next play. Yi's choice of this line in this game, intending to use his sente in the upper left, seems rather rare in professional play 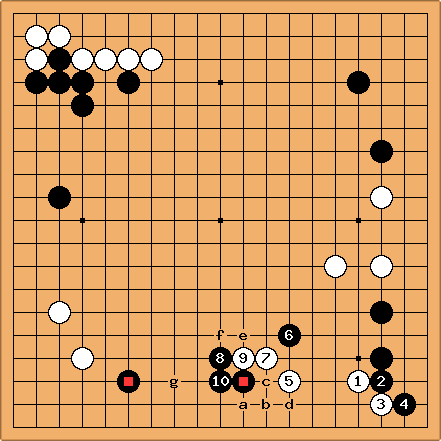 ) seems to be a keypoint in this position.

is an interesting point. 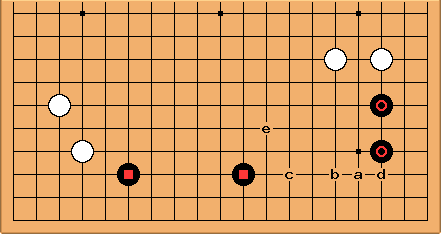 Klaus: white has some good reasons to choose a instead of b:

Bill: I considered Wa in the variation diagram, but then I thought that Wb would be better, making miai of c and d. White's extension in the real game would make me nervous, even though I understand about treating

lightly. However, in the variation diagram, if Wb - Bd, Wc - Be, I see that White is heavy.

) is kind of obvious: protect the corner, keep white under pressure. Cutting the white stone from the center is not goo, because white would live in the corner and black's thickness would face white's strong group above.

). This is a kikashi against the corner and seems to be dangerous. Is white sure that black would reply? This has to be read out.

). A big natural safe move. Black does not want to fight here

). This move together with the next one constitute an interesting technique by which black dodges the fight with a profit. First feint a severe attack and then play solid and wait.

): HolIgor: I am very suspicious of such moves. Playing diagonal just does not seem right because it is kind of submissive. When you are weak play contact moves, that is the rule, isn't it?

dnerra: Well, sometimes you have to get out. It is right that the diagonal move is often bad shape, but I don't see anything better here. You don't mention which contact move you want to play, but I think even the most peaceful looking one at a has problems when black resists in the sequence Wa - Bb - Wc - Bd.

): HolIgor: Suddenly the hole on the left is not a gap anymore and white is not settled yet. And not pushing from behind, what I'd play, I guess.

is something worth to remember. This principle occurs often in running fights.

): HolIgor: I am sure my opponents would not make this move. Honestly, I don't get it. Why strengthen black further? White not play directly above. A good shape? But black gets a good shape too.

dnerra: I don't think this move would occur to me, either. But now that I see it, I find it clear-cut that it is good. A couple of points: 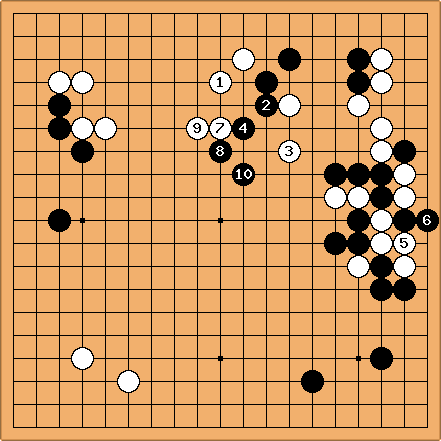 Dave The main alternative is pushing straight up. Here is another game between these same two guys played in 1999. In this case Yu pushes up at

in response to Yi's

. The Black group on the right is much stronger than in the game we are studying. Yu may have been reluctant to push in our game since it would tend to strengthen his opponent and threaten the weak(er) group on the side.

Dave The push at

and the jump in the next diagram appear to be a standard combination. Oddly enough I watched Komatsu Hideki play the same combo against Mimura Tomoyasu in the NHK tournament's televised game today (2004-01-18) on Japanese TV. Notice that the end result is as if White had originally attached on top of the marked Black stone with

and Black had answered submissively at

instead of cutting. Once Black plays

, I think that White does not mind any negative effects from

since it means moving quickly into the center. At the same time Black patches one of the weak points in his original formation so probably we can judge this to be an even exchange. 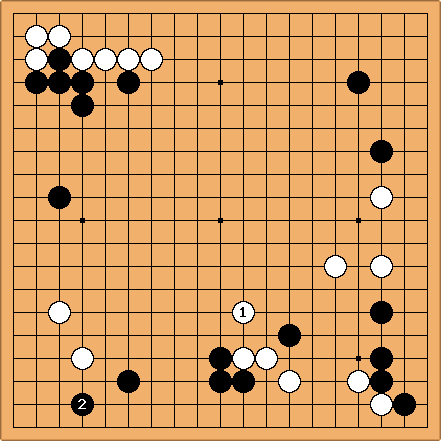 ): HolIgor: White jumps out. This end the invasion part of the game.

): HolIgor: I think that the timing for this move is very good. The purpose of the move in to avoid overconcentration, grab some territory, attack the corner.

As the result of this part black succeded in solidifying some territory in the right corner and at the bottom. White successfully reduced the bottom and even got a chance for some territory there. At the moment white has about 11 points at the top and 6 stones in the bowl cover, black has about 8 points in the lower right corner and 12 points at the bottom. This is the balance of secure territory. Black seems to be a little bit ahead, doesn't he? Yet, this lead is so small an there are so many uncertain areas on the board that everything can happen yet.

I think that the manner in which black converted loose framework into 20 points of territory is very instructive.

It is not good to count after black's move at the stage where a move value should be about 15 points miai yet, but the perspective areas for black do not seem too small.