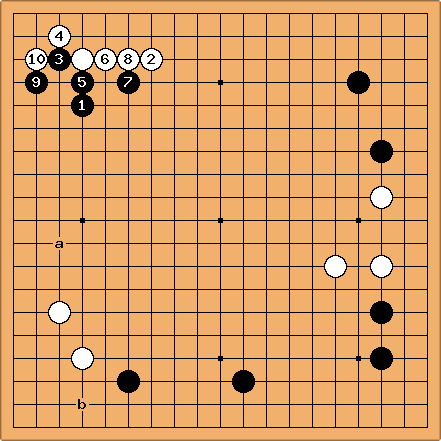 ): HolIgor: I have no idea. Can anybody suggest an explanation why among the rich variety of joseki white chose this variation that gives some territory yet almost excludes the stones in this corner from the fight?

Jesse: Since no one else has answered, here is my guess. White is aiming for a position where he has no weak groups and where Black cannot hope to achieve too much anywhere except along the bottom. Thus White can concentrate his efforts on minimizing what Black gets in his most promising area. Why not attach underneath then? Perhaps White wants to avoid the avalanche? (I'm still not sure exactly when it is appropriate to employ that joseki.)

expecting to tenuki after the following... 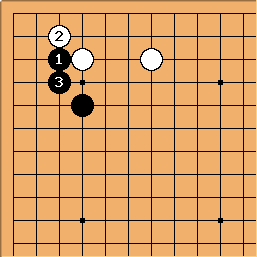 In this position White can decide later whether to attack Black from below or continue with something at the top. If Black continues here and White ignores it, Black will have used sente twice in securing the corner.

like this, the result is very different from the game. When

in this position there is a well-known invasion point in Black's position at the marked point. I believe that Black had this in mind when he chose the sequence in the game diagram starting with

(Black 17). His intent was to create thickness so that White's later extention up the side had nothing to aim at.

dnerra: The continuation of the game may prove me wrong (I write this before looking at

), but one point I guess is that White wants sente to enter the possible moyo in the lower right. Why not attaching underneath? Again I am guessing, but when Black plays the standard joseki with the tiger mouth connection, he naturally gets an extension up to a. This makes it almost urgent to defend the corner at b, and so White's plan to enter the moyo would become questionable. (Addendum: What I wrote here might be best summarized as White's thinking is governed by the nerai of

seems to be a kikashi. But is it necessary for white to connect solidly? Any other connection leaves a weakness behind, of course.

seems to be a correct move in Kageyama's meaning of the word.

): HolIgor: This is a joseki move and it is very difficult to invent by yourself. If white plays tenuki then black get easy life in the corner, probably in sente. Nice.

): HolIgor: Seems natural to stop the opponent from getting sente moves in the corner, gets the corner. But again, this has a feeling of honte. Black cannot settle his group easily in the corner, yet gets a useful extension from the small wall. 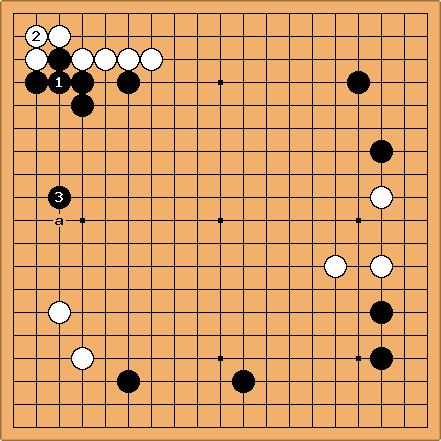 ): HolIgor: Naturally prevents the opponent from settling in the corner. Is in fact continuation of the plan chosen by

. White gets about 11 points in the corner, black protects the wall with the extention.

): HolIgor: How far the extention should be. This is an interesting point. One intersection below at a is also interesting. It would take away white's extension from the lower side, but would create an invasion point. Not that the invasion would work immediately, but somewhere in the future this could be a factor. One has to have feeling for these things. That's why fuseki is devination period. How the fight would turn out?

Dave I agree with this point. As noted earlier, I think that Black chose

in the previous game diagram).

The position after fuseki may be summarized as follows:

It is time for white to decide where the invasion should go. White can actually play a kakari at the top yet. I think that black would solidify the corner in that situation. A pincer does not seem promising.