How to win with a 9-stone handicap

Now, some people would say that this needs no explanations, but in my humble opinion, the only people who receive these handicaps are weak, or weaker than the likes of Bill, Dieter, and unkx80; so maybe a view from you guys how to play it?

Offhand, I was thinking, mirror Go isn't ideal, but how about Partial Mirror Go? I don't know if someone else has already thought of this, but, here's my views on the subject.

Charles Matthews: Like it says in the book, Black must attack.

Not for too long, though: Black's initial position makes it safe to attack, but as White settles groups it becomes more dangerous for Black's own weak groups. And not too hard, either: that leads into the amarigatachi mistake of playing out 'over the top' attacks to the bitter end. No, attack to make territory: to build frameworks and later to consolidate them.

Jan: I find it very useful to try to separate White in order to get targets to attack. Also when I think I am about to be surrounded by White, I don't try to live, but I always try (and usually succeed) to escape into the center. In a nine-stone handicap game, Black will usually have something to escape to.

As White I regard a high-handicap game as a teaching game. Why shouldn't Black do the same? Just make what you think are the best moves, and learn something when they are not the best. :-)

The standard advice for high handicap games is to balance attack and defense 30-70, the reverse of the mix for even games. There is something to that, but I always attacked like hell with high handicaps, and, looking back, have no regrets. Besides, and more importantly, that advice says nothing about dual-purpose moves. You should always look for dual-purpose moves.

The advice of chess master E. A. Znosko-Borovsky is good: It is not a move that you seek, not even the best move, but a realizable plan.

Here is an example to illustrate these ideas.

Darron Shaffer: I'm only an AGA 6 kyu, but do play above my strength at high handicaps, so:

A few rules for Black in nine-stone games:

I find that weaker players start beating stronger players at handicap games when they are able to seize sente, even if it only happens occasionally. There are several facets to this: seeing how to respond to a threat in a way that presents a counter-threat, knowing when you can safely ignore a move, and being able to recognize when white should not have ignored your move--and then acting on it to exploit the weakness.

Adamzero: I think it should be noted that while a lot of these bits of advice will increase your winning percentage as Black in nine-stone games, I do not believe they will increase your strength particularly well or quickly. I think that the best thing one can do is play your hardest, and try to play as though you were White's equal (not as though he were yours, there is a big difference). If you think your move would be passive, but you know it is safe and could help you win, play the move you think is correct and severe. Instead of letting White settle in order to take profit and win by attrition, attack White and punish her for playing too deeply in your sphere of influence.

All this may cause you to lose more games, as White's tactical superiority is so great, but you'll be forming good habits, even game habits, not huge handicap habits. And you'll be forcing White to play reasonable moves, for fear that you'll punish her for playing too ambitiously or disrespectfully. All of this will help you get stronger, though it might be disheartening to lose so much. But if you're taking nine stones, the goal should not be winning, but learning. (Just my two cents.)

Bildstein: I think it's worth considering two strong players playing against each other, who know each other well have have different strengths and weaknesses. The would tend to play timidly when they they were approaching the other's strength. I think it's only reasonable for weaker players to do the same against much stronger players, except then almost every severe move would be approaching the opponents strength. That's certainly how I feel when I play a safe move in a situation where in an even game I would play a more severe move.

Jan: Here's an interesting idea I heard from a fellow Go player who is about my level: play as if the handicap stones weren't there. I was confused at first, but as he explained, it started to make sense.

Just pretend you're playing white in an even game and play your stones wherever you'd want them to be during the first moves: on the 3-4 point or on the 3-3 point or wherever. If you want to play on a 4-4 point - hey presto! - it's already there, you can take another corner (if you like to play nirensei you'll bump into this 'problem' quite early)! When the time to extend to the sides comes and you think playing hoshi there is best - another bonus move! If you want to play on the third line instead, do so.

I think you need to be slightly arrogant to play this way (as if you don't need those handicap stones) and you have to count your liberties more often, but I think it could help you learn to play on an even footing. Maybe I will paint 9 of my black stones grey to illustrate the difference :-)

Charles I think this advice is potentially misleading. Be kind to your handicap stones. They should be brought into the game with some definite role, not just used as cannon-fodder. This is an accordance with the general principle: play taking into account your existing stones.

unkx80: Sorry I commented so late.

Like Charles, my advice would be to make the handicap stones useful. 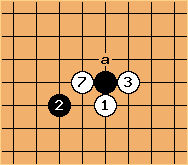 In one of the recent handicap games I played, the Black player did not know how to make use of his existing stones.

attached at the tengen stone. It was answered at

, but the hane at

made the situation pretty even, making the tengen stone losing much of its lusture. Later

was played, Black thought that the stone was small, and allowed the ponnuki at a. So effectively, the potential usefulness of the given handicap stone was never utilized. It is a game which I won easily.

ferdi: How to win with a 9-stone handicap? Don't get nervous...

Floris: What i also see played a lot in handicap games are moves such as the marked stone in the diagram. This move is not necessarily bad, but it basically ignored the features of the 4-4 and side hoshi stone. The move itself does not protect the corner at all (W can still live with ease at a), and in exchange makes a little bit of side territory. On the other hand, a black move at b works together nicely with the other black stones. White can still live in the corner at a, but black builds more influence than with the marked move, and is making territory on the side as well (territory is a big word, but black can expect at least some points there).

Black c or nearby moves are also playable, strengthening the side and leading toward the hoshi stone in a 7 or 9-stone game. These possibilities are much less interesting at 6 or 8 stones.

iopq: The best advice I ever got on this subject is to stay connected. Moves that are sub-optimal but help you connect all your stones will win you the game. If you don't lose any groups, how can your more skilled opponent overcome the 150 point advantage you start out with? The reason for losing a handicap game ALWAYS has something to do with losing a big group. If you just do one point jumps everywhere, you almost can't lose. Even if your opponent invades everywhere, now you have influence and take the rest of the board easily. Of course, you accomplish this by attacking the white groups and forcing them to make life while you blissfully enjoy your influence that starts to become center territory. In 9 stone handicap games small advantages cannot be accumulated by White. If you connect, it's almost guaranteed you win.

FredK -- In his book, Handicap Go Strategy, Shirae Haruhiko, 9P, recommends that Black try such a strategy in 9-stone games, making one single connected group while forcing White to make several isolated groups along the sides. See the review for a sample fuseki diagram. Basically, he caps low approach moves instead of responding with extensions or shimaris. (Of course, if White doesn't oblige with low approach moves, well, there are other strategies....)

cazort: I heard this advice when I first started playing and I think it's a good place to start but it has its limits. I've seen some clever players win handicap games in odd ways. In one game I saw black connect into a massive group involving most of the original handicap stones, only to fail to get two eyes with it! I've also seen games where white successfully keeps black off all the sides and takes all the corners, and black is forced into the middle with very little territory. In fact, I've won 9-stone games against weaker players with this strategy. I think that a better strategy in a handicap game is to critically assess the purpose of your opponent's moves and adopt a flexible strategy based on this purpose. This also helps you learn to think about the game more than staying focused on a single goal like connecting. And don't forget that often, sacrificing one group can be an excellent way of gaining something else. I found I started to win my handicap games when I was willing to give up groups...often in exchange for killing one of my opponent's.

Pashley The Takemiya kosumi is interesting in 6 or 9-stone games. Results are sometimes good for black; the joseki is unusual so white may not know it well. It is normally a san ren sei joseki, but more-or-less all variations work better for black with the extra hoshi stone in place.

Where are the big points for Black in a 9-stone game? I'd say the 10,6 points are top of the list. They lead out to the center and sometimes split white's groups.

The only time I've managed a 20-point win against someone actually nine stones stronger, I connected one of my 10,4 stones to tengen with one-point jumps at 10,6 and 10,8 then chased weak white groups on both sides of it.

See also: How to win against 9 stone handicap