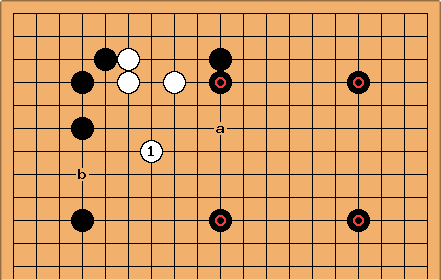 In this position White is not strong yet. One should look for a move that develops Black and at the same time attacks White. Both a and b are good moves. 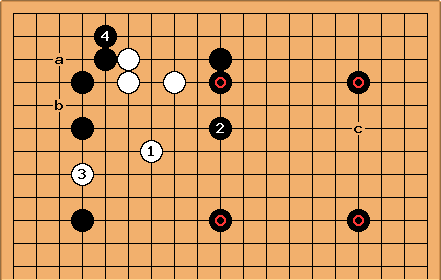 Developing the right side

is a development of the right, at the cost of the left. After

, Black has to be careful, since a and b are weaknesses/invasion points and Black is getting surrounded. Next

more or less secures Black, while White has even less of a base at the top now. Black is developing on both sides while White has no secure territory. If Black can get sente, c is a good point to build a box shape using the marked stones. A box shape forms a framework, giving you an advantage when middle game fighting starts. 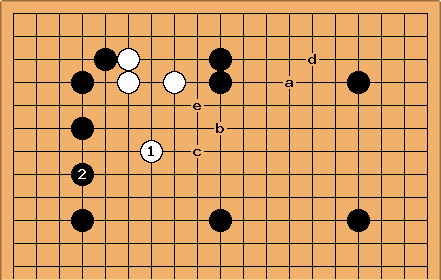 Protecting the left side

protects the left side and keeps the pressure on White. If white invades at a, moves like b and c come to mind as both an escape and an attack against White. Because the left is secure, Black can play with a free hand on the top and the right. White has no territory and is split on a global scale, while Black has a good area on the left. If White plays a move like b (which still gains no territory), then Black gets another move to consolidate and strengthen himself. d and similar moves look good, and e remains a weak point for White.

Try playing dual purpose moves that develop Black while attacking White. Every invasion White plays is a chance to do so. Keep White from getting a base while keeping Black strong, or if this is not possible, then enclose White for outside influence. Whenever White plays moves that run out to the center, White is not gaining any territory yet, while a combination of attack/develop responses will be.

Contributions by: Buitenland, Symplicity and xela