Based on an NHK lecture course taught from October 2003 through March 2004, this lively book presents nine thoroughly commented model handicap games, from nine stones down to four stones. There are two each with eight, six, and five stones, and one each with nine, seven, and four stones. For each level of handicap Shirae features a different guiding strategic theme, and for nine, eight, and seven stones, the games employ non-standard fusekis. The commentary is mostly, though not entirely, from the viewpoint of black.

By the expression "model game", I mean that these do not seem to be actual games played between any amateurs, or by amateurs against teachers -- they proceed far too smoothly, with no real mistakes: the mistakes, including overly timid black moves, are reserved for the variation diagrams. In addition to mistakes, a good number of the variations concern alternate playable responses by black, some a bit poorer and others noticeably better than what happens in the games. These get classified as kyu level, high kyu level, shodan level, or high dan level.

The difference between weaker and stronger playable responses, besides the difficulty of the tactical sequences, is typically that in weak ones, black sacrifices profit or influence, or allows white more than he is entitled to, in return for a more settled outcome. Shirae is usually sympathetic to weaker players, allowing that extra security in one part of the board could lead to more confident play elsewhere. In fact, following one "high-dan level" variation in the seven stone game, he remarks, "Someone who could play like that gets seven stones? No way!!" At the same time, he constantly urges the reader to master the sharper techniques.

Perhaps these games derived from his classes, in which he might have played out a few moves and then asked for responses which were then dissected and corrected, with one of the reasonable ones becoming the official continuation and others making their way to the present variation diagrams; and so on. It would be fun to think that we're getting a look at how the classes were actually conducted.

The book seems almost written in layers, aimed at players of widely varying strengths. For instance, the tactical explanations seem written to be useful to mid-kyu players; and in the nine-stone game there is even a detailed explanation of why a certain simple ladder fails. Following that game, Shirae provides a comprehensive glossary of about fifty standard, common Go terms. Yet, I think it would take relatively strong players to carry out the strategies as successfully as shown. At any rate, the book is a good read -- the flows of the games are interesting, with frequent enough diagrams not to require setting up a board; and in addition to handicap strategy, they feature nice tesujis and tactics which could obviously be played in even games too. Here's one I probably should already have known; but I didn't: 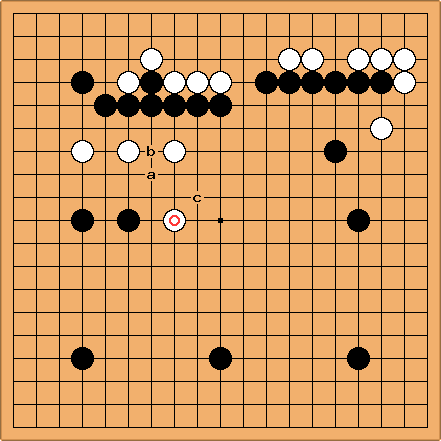 W's sad-looking upper-center group is the result of an invading stone that got pincered by B earlier on; it now has to look for eye shape. But the two-space extension

is thin. What's B's best way to sever it? Answer: Ba, which must be answered by Wb, followed by the knight's move of Bc. We are next shown that against W's best resistance,

gets separated and the rest of the group gets smothered, eyeless.

So W can only play a one-space extension. That being so, after B develops the bottom W still ultimately gets surrounded from below, giving B lots of bottom and lower central territory.

Incidentally, Shirae's strategic theme for six-stone games is the relentless employ of pincer attacks. Here is a bit about the strategies taught or recommended for other handicap levels. 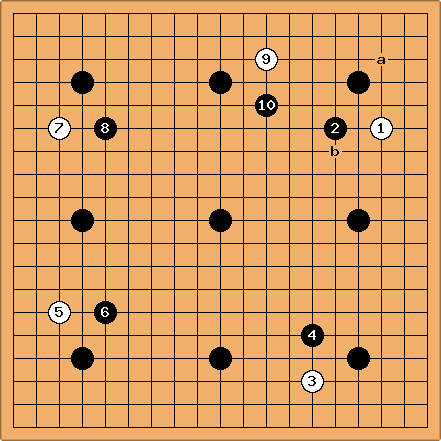 This is the beginning of the nine-stone fuseki -- no shimaris, only caps! (But what if W doesn't play low kakaris? Check out the eight stone games, I guess.) The recommended strategy for B is to build one single connected group and, to the extent possible, keep W out of the center and split up into a bunch of disconnected groups along the sides and in the corners. This plan works beautifully in the model game, with W restricted to 2nd, third and fourth line territory, and not even holding all the corners.

It seems as if W is cooperating a bit here, though Shirae explains how to handle other W plays, say,

at a or b. If at a, then W stays sealed out of the center; but if at b then W definitely breaks in, at least part way, so it starts looking like a different game. (But then B can try following the eight-stone strategy, I guess!) Shirae's final slogan for the nine-stone player is that "a single connected group does not get defeated", followed by an exhortation to really try playing this way. 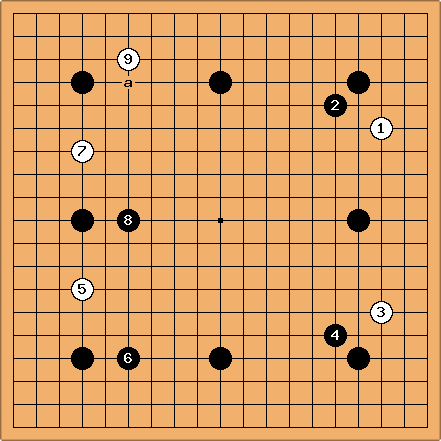 This is the initial fuseki for the second of the two eight-stone games. (In the other, all four initial W moves are low kakaris, and all four B responses are at the 5-5 points.) The strategic theme advocated for eight-stone games is to keep W split into isolated groups which are sealed off as early as possible; but there is no longer a radical attempt to seal W out of the center.

In one of the variation sequences Shirae discusses playing

at 'a', allowing W to cap with

at 8, and then sacrificing the left side star stone via reducing moves from the outside to limit W's profit and build up some thickness as well as lower and upper corner territory. This is playable; but it would be quite a different game. As the handicap decreases, Shirae gradually introduces sacrifice strategies, aggressive pincer attack strategies, the cultivation and use of thickness, and more general shape considerations. Incidentally, a comparison with Nagahara and Bozulich, Handicap Go, shows that probably all the precepts given there for B's play show up in this book as well, though as parts of game commentary, not as systematic exposition. 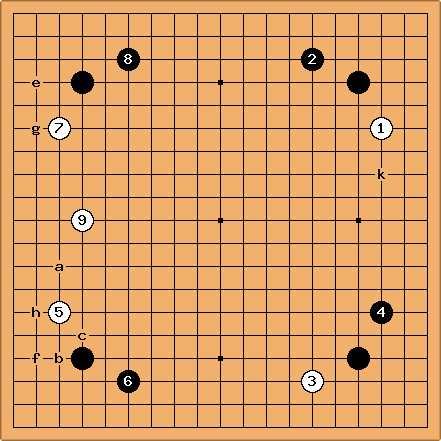 Finally we arrive at the four-stone game. Note the low shimaris. Shirae remarks that the low response has become very common in professional play and can very well be introduced into handicap play,too.

be played? An invasion at a is considered, but the possibility of a W counter-attack, starting with plays at b and c followed by a swallowing of the invasion stone, is found to be too risky for B; so that plan is abandoned.

Next, B plays at e and f are considered, walling off the corners while allowing W some side territory; and these are to be followed very soon by reduction moves at g and h, respectively. When the smoke finally clears away, B's two large and solidified corners outweigh W's side, and Shirae feels that this is an acceptable way to play.

However, in keeping with the proactive attacking themes already developed in the lower handicap games presented earlier, he prefers the pincer attack at k, leading to an interesting fight in and around the corner. This book is a fine collection of strategic and tactical ideas from which I found much to learn, even for non-handicap play (particularly from the later games.) I have already dismayed some opponents at the local go club with an attack on two-space third-line extensions, that I picked up while preparing this review.

Incidentally, the recommended response to crosscuts in these games is almost always the proverbial extension, as opposed to the positions studied, say, in Ishikura's books, in which that response is rarely the first choice. There's something here to be understood.