How To Win With A 9 Stone Handicap Example 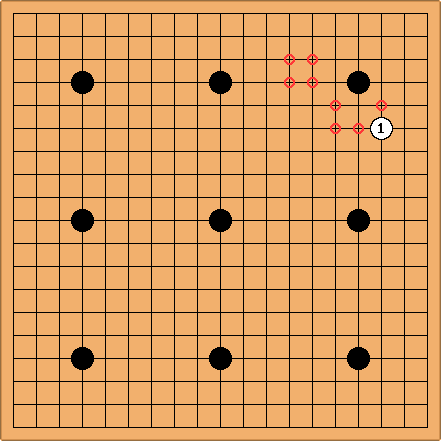 several dual-purpose moves come to mind, such as the marked points, which combine attack with making territory or moyo. I want to show you another one that is a bit unusual, but rather good for high handicaps, I think. 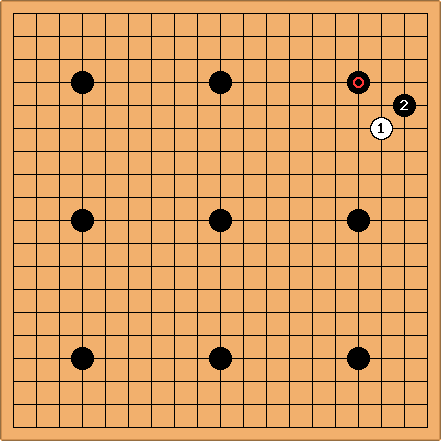 looks passive. However, it is a good, dual-purpose move. It makes a base for

while making it difficult for

to make a base. Black's plan, such as it is, is to solidify the lead while attacking White's weak stones, such as 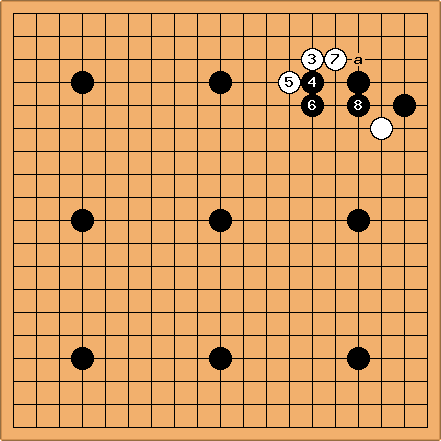 A lot of Black players would respond to

at a, but that would be too passive. Divide and conquer is the rule, in line with Black's nascent plan. Black plays

.
Now a is surely the best move. However, Black is looking for a realizable plan. If Black a and then White pushes and cuts, things get complicated. The plan might go down the drain.

is prudent in a high-handicap game. (Note that it is still dual-purpose, combining attack and defense.) 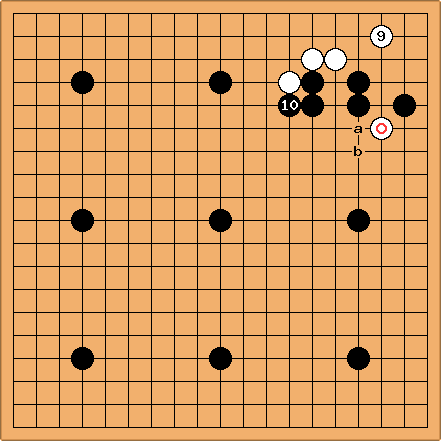 White is busy, and thus not too likely to continue with

, but I wanted to show you

. This position may be slightly better for White, but not by much, despite

is the kind of play that weaker players often overlook. It doesn't seem to do very much. However, it is a nice, thick play that solidifies Black's stones, casts its influence towards the center and left side, and attacks

on a large scale: a triple-purpose move! :-) 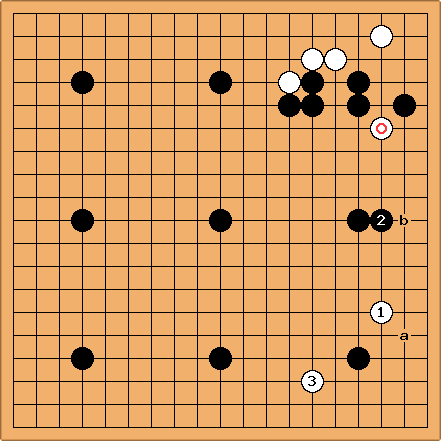 or Wb, and the plan to attack

could go right down the drain.

continues the plan, attacking that stone on a large scale. It also attacks

. It is OK to allow the double kakari.
In response to

, Black can separate the two white stones and attack

. However, I want to show you an idea of Maeda Nobuaki's. 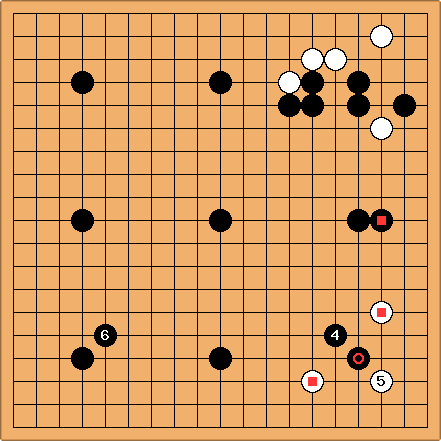 Black trades the iron pillar for the double kakari (all marked with squares). Now

would be intolerable, so Black plays there, inviting

. Maeda's idea is to play tenuki to the first kakari, exchange

to the second kakari, and then play tenuki again.
Black could continue the fight, but is outnumbered locally. It is OK to play elsewhere. Why should Black fight where outnumbered and outclassed? Black can always come back, and besides, it is difficult for White to capture

.
If Black plays elsewhere, there are many good plays.

is one you might not have thought of. It does not secure the corner, but it has a good relation to the nearby handicap stones. :-) 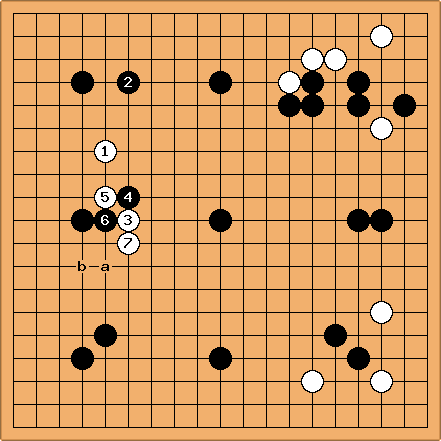 that often but Kajiwara Takeo likes it. ;-)

is a normal reply.

initiates a battle where Black is locally outnumbered. A play at a or b may be wiser, but I wanted to show you something about approaching such fights, which are hard to avoid completely. 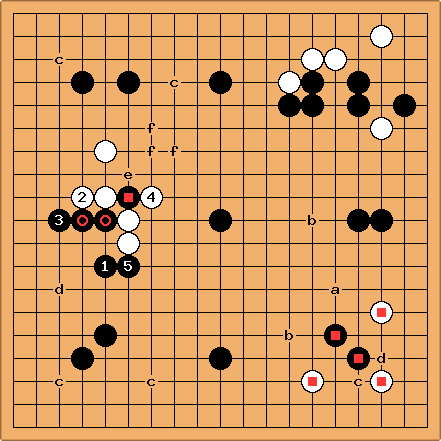 is surely correct, but then the

stones will undergo an attack.

secures them and makes territory while threatening

may be the best play, but it is the kind of thing of which nine-stone disasters are made. Better to regard that stone lightly and threaten to run with it.

is another nice, thick play, extending Black's framework while supporting a possible run-out with

.
Black's play may appear inconsistent, since Black initiated an attack, but then dropped the ball. However, Black still has some aji left, and has strengthened the position on the left side, making territory and extending influence. The attack has allowed Black to make this trade.
Has White gotten the better of the deal on the left side? Surely. But if Black keeps making deals like this, Black will win handily. ;-)

Klaus: Stangely I like the white position! (For being a nine stone handicap.) The marked black stones are weak. White might start to frighten them by playing a (after which a cap at b might be fun later, remembering the handicap!) White has succeded in making 3 stable groups, without being shut in. O.K.: almost all white stones are weak, but White has at least one target (marked stones). All the c points might lead to interesting invasions and even the overplay at d comes into consideration. I guess, White is fine, even without finding a black blunder.

Floris: Oh no, they are very strong strones. Much stronger than the marked white stones in fact. a is a big overplay, black will simply jump out at b still waiting for a good time to play either c or d. Whatever white does now, a will be in an awkward position.

dnerra: Bill, I really liked your suggestions of thick solid play -- until there came

in the last diagram. Letting white connect two dead groups with a ponnuki at a place where the resulting influence radiates over the whole board feels unbearable to me even in a 9stone game. You have probably taught go to many more people than I have, and have more experience with handicap games, so I am left puzzled. I have always recommended kyu against playing moves like

-- let me try to give some reasons:

Bill: Dnerra, as I said, I always fought like hell with large handicaps. I recommend doing that for those who have the stomach for crushing defeats. ;-) With this example I am basically trying to illustrate two things, dual purpose plays and plays that advance a plan, even if they may not be locally best, or even objectively best. I also want to point out that it is fine to sacrifice stones. You do not have to try to save everything. Maybe my example is flawed because

is too bad a play. However, it is not a submissive play. It is a thick play that carries a threat against White's group.