In what order do people learn joseki?

The first joseki most people learn are 4-4 point joseki, due to the fact that handicap stones are mostly on the 4-4 points. 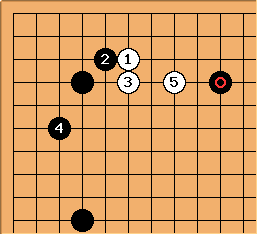 This joseki is mostly played in high handicap games (8-9 stones), where the marked stone

is in place. Many beginning players do not truly understand this sequence, but have been taught to play it by stronger players. The concepts that

makes white heavy, and that

is overconcentrated are quite advanced.

Beginners will often later make the mistake of playing

stone is not present. Without that stone, the

exchange is no good, because it strengthens white while not really protecting the corner (a 3-3 invasion is still possible), and white can make an ideal extension after

on the side hoshi (where

is in the diagram) or below it. (For full explanation, see: Joseki as a source of bad habits) 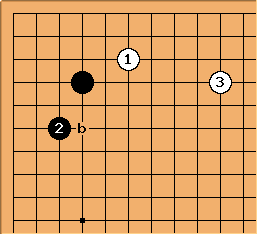 As handicaps gets smaller (2-7 stones), joseki start to appear in situations where the side hoshi is still open. Players will learn that the low approach

is a normal move, and that playing

(or b) in response is also normal.

completes this short and simple joseki 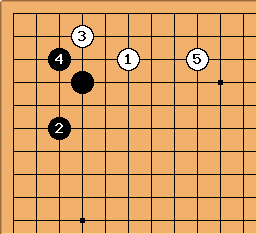 in the previous diagram, sliding like this is also popular. This is another simple joseki, with black defending the corner with

and white making a base with 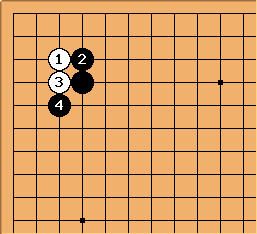 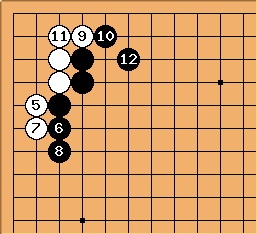 This is the most common follow-up to the 3-3 invasion. White gets territory in the corner, and sente, while black builds an impressive wall. 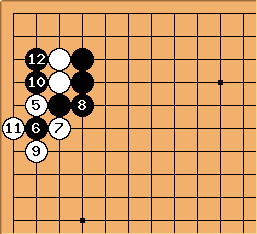 This double hane with

is the main alternative. Here black prefers to take the corner, while white gets a strong ponnuki on the outside and retains sente. 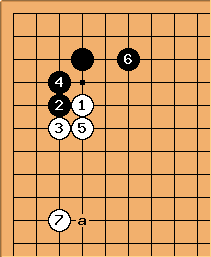 This joseki is one of the first 3-4 joseki in the repertoire of beginners. It is simple and gives both players stable formations.

can also be one line higher, at a. 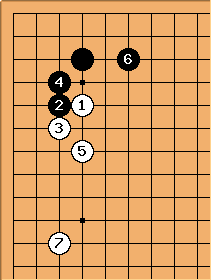 This variation is also popular, and is generally learned at the same time as the one above. 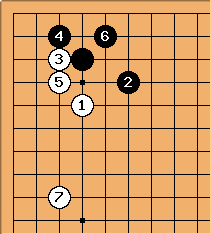 Another simple joseki that gives both players a reasonably stable shape.

tapir: Think about joining forces with EagleHelm/Joseki Every DDK Should Know

BramGo: The following website basicly does the same thing. It's a list of joseki ordered in categories of reccomended rating.