In many rules disputes, there is an element where the rules make a local position seemingly illogical due to global circumstances.

Most people feel that the following white groups should be dead:

However, there are situations where the global situation make this debatable. Below are some examples. 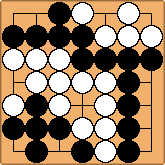 In this position, white has an unlimited number of ko threats (and so does black). So if black takes the ko in the upper right, white can always play a ko threat in the lower left and retake the ko.

This situation is known as moonshine life. The status of this situation may depend on the rule set used. Under Japanese rules, this situation is ruled as dead. Without any such special ruling, the situation is ambiguous under rule sets without superko. Under rules using superko, the situation can be played out, and there will come a point where taking any of the ko's in the lower left is not allowed due to superko restrictions.

Conclusion: white should pass after

and accept that the upper right corner is dead.

With the same group, we might show the local position thus (on a 4x4 board):

White has just captured with

, and since black has no move he can play, black passes. Under rule sets where two consecutive passes end the game, white might now pass and claim life. This is know as the 1-eye-flaw.

Note that this depends on there being no sensible legal plays, at all, for black. On a 19x19 (or even 9x9) board, this is unlikely to happen.

However, under territory scoring, if there are no more dame points, any black play would lose a point, and white might claim that black need to make such a play (and lose that point). This was the basic reasoning behind the first of the Rule Disputes Involving Go Seigen. 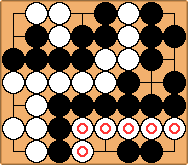 What is the status of the marked white group?

Suppose black claims it is dead, and white challenges him to prove it. 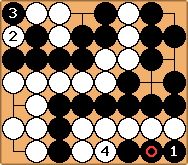 sets out to prove that white's group can be captured.

is a ko threat. If black plays the marked point to kill white, white can retake the upper left ko, and since black has no ko threats, that group would die.

, white has no ko threats, so he couldn't play the ko in the upper left. But black has no way to remove white's option to start the ko either.

It depends on the rule set used to determine whether white's group in the lower right is alive or dead.